Owlet has had a rough path to public markets, but that's a buying opportunity for investors.

It's hard to argue that Owlet's (OWLT -7.19%) move into public markets went as planned. A SPAC merger with Sanbridge aimed to bring in $325 million in cash, which included $130 million from PIPE (private investment in public equity) investors. But Sandbridge's stock fell below $10 per share, and most of its investors chose to redeem their stock rather than taking shares of Owlet. As a result, Owlet ended up adding just $135.7 million in funds from the PIPE and SPAC.

Since the SPAC merger officially closed in July, shares have continued to fall and trade at $5.64 as of this writing, putting the company's market cap at about $766 million. It's with the SPAC merger behind us that I think investors need to evaluate Owlet as a public entity, and I find a lot to like about this children's health company. 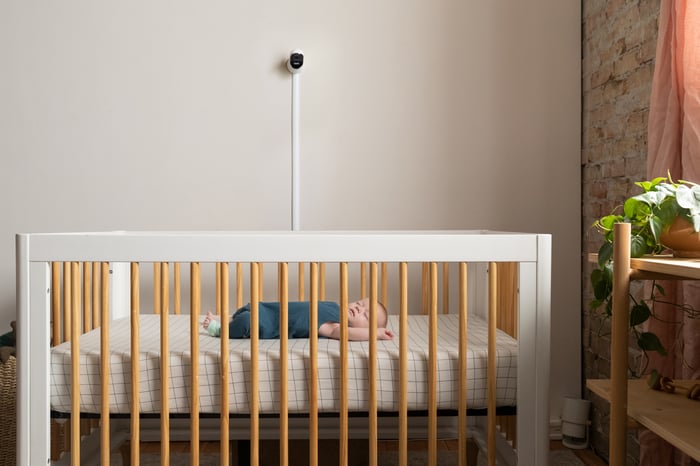 Owlet is already a growth machine

Owlet was already a fast-growing company even before getting $135.7 million from public investors. Full-year guidance is for $107 million in revenue, a gross margin of 54% to 55%, and an adjusted EBITDA margin of negative 24.5%. That's an improvement from 2020 when revenue was $75.2 million and gross margin was 47.5%.

In its presentation to investors, Owlet's management said it expects to grow revenue to $1.06 billion with an EBITDA margin of 15.8%. That may be extremely optimistic, but there is a lot to like about Owlet's business over the next few years.

To date, Owlet has been primarily a U.S. company with most of its business coming from Midwestern states. Not only can Owlet grow by adding to its U.S. supply chain, it can expand internationally, potentially increasing its addressable market by more than 7 times.

The smart sock is Owlet's core product and will likely continue to drive adoption of the company's products. But it's adding complementary products like the Duo baby monitor, a belly band for pregnant mothers to monitor baby's heartbeat that's in beta, and a light and sound machine called Soothe that's under development.

As the product ecosystem grows, Owlet is building a valuable set of data about each baby. This could be critical for tying into telehealth long-term. Automatic warnings could be sent if a child's condition changes, the app could tie to a telehealth service, and data can be sent to a primary care doctor ahead of visits. Owlet hasn't launched its telehealth services yet, but given the unease new parents feel when their baby is sick, it's a natural value-added software-as-a-service given the data feed it already has.

Owlet is also trying to grow its market by becoming a standard product approved by insurers and the FDA. The Owlet Sock is going through FDA marketing authorization right now; the company hopes it will eventually be covered under insurance for parents.

The company is also looking for FDA marketing authorization for a BabySat product specifically for sick babies that need more monitoring.

Gaining the stamp of approval from the FDA is one step toward the path of being as standard as a breast pump when leaving the hospital with a new baby, and that could quickly open up the market for Owlet.

Look past the SPAC merger

There were clearly flaws with the SPAC merger process. Maybe the company was overvalued, or maybe investors didn't like the lockup provisions. But right now Owlet has a $766 million market cap, $135.7 million in new cash, just $15 million of debt, and a rapidly growing business.

If Owlet can come anywhere near reaching its growth potential, this could be an incredible stock to own long-term. There are no guarantees in its performance, but as a parent with two young children who has seen the value of Owlet's products, this is the kind of technology that I think will be standard a decade from now -- and Owlet is clearly in a leading position.