Robinhood users biting into Apple could fatten their investment portfolios.

Amid the release of a new iPhone and its Series 7 Watch, Apple (AAPL -1.20%) has emerged as a popular stock among users of the Robinhood Markets (HOOD -1.60%) stock-trading platform. Admittedly, the list of most widely held stocks on Robinhood may better reflect the companies that are most acclaimed rather than those most likely to generate positive returns. Nonetheless, Apple is a tech stock that provides a combination of popularity and genuine growth that could deliver for investors. 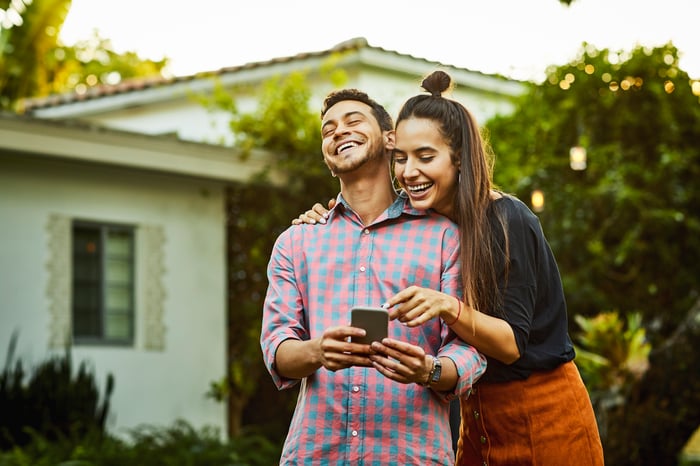 While there appeared to be some uncertainty about the company late in the previous decade, Apple has managed to revive its product line in the eyes of consumers. In 2019, Apple faced declining iPhone sales. The iPhone, which has long generated the majority of the company's revenue, was losing customers to lower-cost competitors. Moreover, other products such as the iPad and Mac were posting only tepid growth. Despite the release of the first Apple Watch in 2015 and AirPods wireless headphones in 2016, the company had offered few truly new product lines since founder Steve Jobs passed away in 2011.

Recent results seem to suggest Apple has found a way to innovate without Steve Jobs. In 2019, the company added offerings such as Apple News, Apple TV, the Apple Card, and came out with truly next-generation versions of older products.

Furthermore, the pandemic revived sales of Macs and slowed declines in iPhone revenue as demand for electronics skyrocketed. Also, iPhone sales returned to positive growth in the fall of 2020 as the company offered its first 5G version. Fortunately for Apple investors, the 5G upgrade cycle is still in its early stages, making the iPhone more likely to sell well for the foreseeable future. Additionally, the camera and video features offered by its latest release, the iPhone 13, could help make it a resounding success.

How Apple holds up financially

Additionally, Apple's $2.4 trillion market cap does not mean it has become too large to deliver meaningful growth. In the first nine months of fiscal 2021, the company generated more than $282 billion in revenue, 35% more than in the first three quarters of fiscal 2020. Also, net income of $74 billion during that period surged 66% over the same time frame, as the cost of sales and operating expenses rose at a much slower pace than revenue.

Apple also said on its Q3 2021 earnings call that it expects slower but robust double-digit percentage, year-over-year revenue increases for the final quarter of 2021. Still, the recent release of the iPhone 13 and the Apple Watch Series 7 may induce more customers to upgrade, which should help keep revenue growth solid. Investors should also note that stockholders did not punish the stock over near-term uncertainty.

Furthermore, its recent performance gives time for new investors to open positions as Apple stock has risen by only 11% in 2021, well under the 60% stock price increase from another tech giant, Alphabet, or Microsoft's 35% stock-price surge over the same time frame.

Consequently, its price-to-earnings (P/E) ratio has fallen back to 29, only slightly higher than the pre-pandemic level of approximately 25. This makes it slightly cheaper than Alphabet and Microsoft, which sell for 31 and 37 times earnings, respectively, a factor that could help induce investors as more users turn to its products.

Investors shouldn't buy stocks just because they are popular on Robinhood, but the investing crowd there seems to have made a prudent decision in the case of Apple. Rising demand, new product offerings, and a 5G product-upgrade cycle have helped boost Apple's revenue. Moreover, it has maintained massive profit growth despite its large market cap. The fact that it trades at a discount to its largest peers serves as yet another reason to bite into the tech stock.