Incomplete data is disappointing investors after a long wait.

Shares of gene-editing company Editas Medicine (EDIT -5.09%) are down more than 17% as of 11:15 a.m. EDT this morning after the company shared the first clinical data for its CRISPR-based treatment EDIT-101.

Unlike many other companies using CRISPR to try to cure a genetic disease, Editas chose an inherited form of rapid vision loss as its target. The defect impacts the retina's ability to sense light and is estimated to affect a few thousand people in the U.S. and Europe. Most of those people are effectively blind in infancy or early childhood.

EDIT-101 is also an in vivo -- or inside the body -- treatment. While some gene-editing therapies for blood disorders require a transfusion, in vivo treatments can be injected directly into patients where they find and edit the target genes. 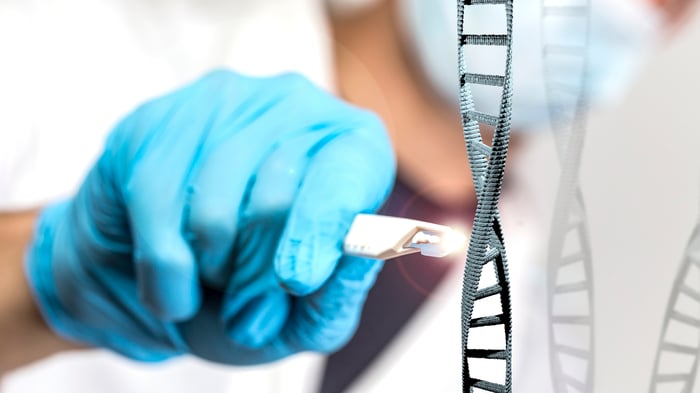 The company shared data from the first six patients who received the sub-retinal injections. Three doses of the therapy were tested. Although none showed serious side effects, the cohorts had mixed results with respect to efficacy.

Two patients with the lowest dose did not show meaningful improvement in a test of functional sight. The middle-dose cohort contained one patient who had improvements sustained six months after treatment. There was another patient who had some indicators of improvement but not sight.

The results might not have been the overwhelming success that investors got from the in vivo treatment by Intellia Therapeutics and Regeneron in June, but there is progress and more data on the horizon.

In the middle-dose cohort, the patients who did not experience as much improvement were treated more recently. They could see better results over time. Enrollment is ongoing for a high-dose and a pediatric group.

After two years of waiting -- much of it because of disruptions related to the pandemic -- chief medical officer Lisa Michaels was refreshingly transparent in her reason why the company presented data that was somewhat incomplete. She said, "At the end of the day, I'll be honest with you, it was a calculus of: 'this trial has been going on for so long and we haven't been communicating,' I thought it was important to come out with data." At least for today, shareholders might disagree.