Please ensure Javascript is enabled for purposes of website accessibility
Log In Help Join The Motley Fool
Free Article Join Over 1 Million Premium Members And Get More In-Depth Stock Guidance and Research
By Josh Kohn-Lindquist – Sep 30, 2021 at 10:09AM

Founded in 1959, Casey's General Stores (CASY -1.36%) operates primarily in small towns throughout the Midwest, with over 70% of its stores in towns with populations of less than 20,000 people. Focusing on these small markets, Casey's has built the fifth-largest pizza chain in the United States in terms of total kitchen count.

Thanks to these kitchens and the gradual reopening of the country's economy, Casey's posted a record-breaking first quarter, highlighted by earnings before interest, taxes, depreciation, and amortization (EBITDA) of almost $250 million in comparison to its market capitalization of only $7 billion. Despite these huge short-term results, I believe the company's vertical integration offers a promising longer-term competitive advantage that will play out over decades. 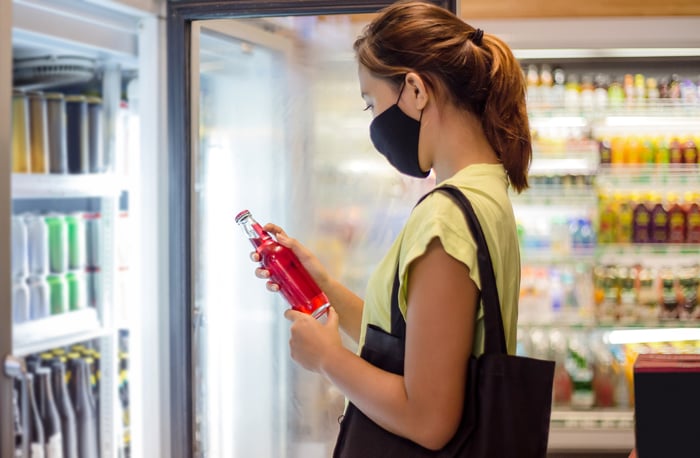 Casey's vertically integrated model self-distributed 90% of its own inside store goods and received 75% of its fuel from its own fleet of tankers. This paid huge dividends for the company during the pandemic, as it was able to grow same-store sales for its grocery and general merchandise segment for eight consecutive quarters, despite the effects of the pandemic.

Thanks to its three distribution centers in Iowa, Indiana, and most recently Missouri, Casey's was able to keep its shelves stocked at a time when many convenience stores were fighting to stay open. Furthermore, as the company "grows" into its new distribution center in Joplin, Missouri, it should continue to see margin improvement as it gradually moves further south. Over the last six quarters, Casey's has seen its grocery and general merchandise gross margin rise from 30.4% to 33%, while prepared food and dispensed beverage sales rose from 60% to 61% over the same time frame. Considering these margins improved during the peak of the pandemic's timeline, Casey's appears to be beautifully positioned to ramp up profitability over the coming years.

Thanks to the success of its self-distributing business model, Casey's finds itself in a unique position to launch a private-label offering to its customers. While still young, the company already offers 209 Casey's branded products and has an additional 60 products in its pipeline. President and CEO Darren Rebelez explained that the company is already at a 4.4% penetration rate for its private brands and "over time, we expect to get to 10%, but that's going to be a multiyear exercise." Throughout the pandemic, these private-label products have offered immense flexibility for Casey's as it was less dependent on manufacturers to provide grocery products to sell.

So far, many of Casey's branded products have been an immediate hit with customers, which Rebelez explained, stating, "The Casey's brand has already grown to be the No. 1 guest choice in bagged jerky, packaged bakery, and nuts and seeds." As the company continues to grow its private label's share of inside sales, investors should watch for continued improvement in the company's inside gross margins.

While Casey's chosen corner of the consumer goods industry doesn't generally boast many companies with immediate multibagger upside, the company itself does have a lot to offer investors as a potential core holding. Having grown its dividend for 22 consecutive years, Casey's is on the cusp of becoming a Dividend Aristocrat, sporting a reasonable 0.7% dividend yield versus a tiny 16% payout ratio. Thanks to this low payout ratio, the company has a dividend potential of 4.7%, which equals its dividend yield divided by its payout ratio.

Because of this dividend-growth potential and long-term competitive advantages through its vertically integrated business model, Casey's stock makes for a great core holding with steady growth upside. Looking ahead, I will focus on Casey's continued margin improvement thanks to its private-label expansion.

An Investor's Look at Data Analytics
351%