Looking to build off its history of success in rural communities, Casey's is still in the early stages of expanding to small towns across the Midwest and beyond.

Iowa-based Casey's General Stores (CASY -0.28%) is a bit of an anomaly in how it approaches its marketplace. Casey's essentially masquerades as a prepared food and pizza chain that happens to sell gas in the rural communities it serves. Its focus on communities differentiates the company from its peers and has helped Casey's become the focal point in many towns that go unnoticed by major food brands.

Ultimately, this leadership position within the communities it serves makes Casey's an exciting investment to consider when trying to beat the market. By becoming the go-to option for pizza on a Friday night in hundreds of towns across the Midwest, the company has built a devoted customer base and beloved brand. 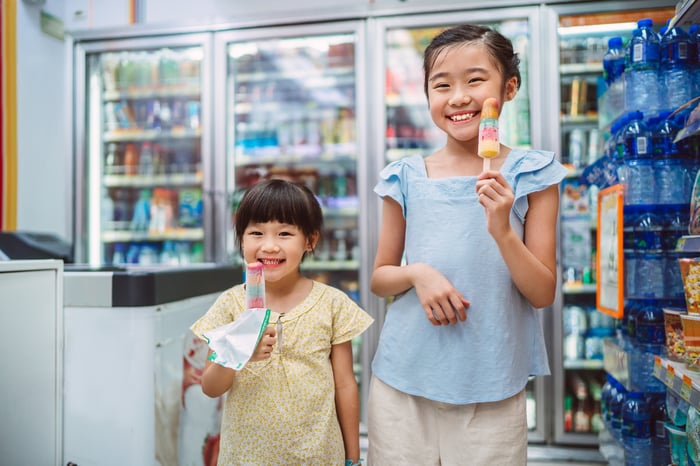 How focusing on communities leads to growing profits

With 52% of its stores in towns of 5,000 people or fewer and 78% in 20,000 or less, Casey's has become the focal point of many small communities. Taking a page out of Walmart's playbook as it expanded long ago, focusing on towns allows Casey's to become entrenched within the community, making it the primary food establishment there. This entrenchment enables the company to generate a significant portion of its sales from prepared food and fountain beverages as well as grocery and other merchandise, accounting for over 40% of revenue. The hidden beauty of these sales is that they generate much higher gross profit margins than fuel, to the tune of 40% over the fiscal year 2021. Moreover, these margins lead to inside sales accounting for nearly two-thirds of Casey's total gross profit, highlighting its ability to distance itself from reliance on fuel sales.

For comparison, Murphy USA (MUSA -0.24%), a convenience store practically famous for its proximity to many Walmarts, has a gross profit margin of 7.6%, whereas Casey's comes in at 30.8%. These margins trickle down to the bottom line, where Casey's holds a 4.1% profit margin versus Murphy's 2.7%. On top of this, during the Q4 earnings call, President and CEO Darren Rebelez explained that these margins are poised to improve further, saying: "we're seeing a resurgence in pizza slices, dispensed beverages, and bakery as our guests return to their normal daily routines."

Overall, this community focus gives Casey's an edge in profitability, but how does the company's remaining growth potential look?

Early stages of the growth runway

Casey's is still in the early innings of its growth runway despite an over-allocation to rural communities. For example, within the company's current geographic footprint, 78% of towns with a population between 1,000 and 20,000 do not yet have a Casey's store. So now you may ask, just what percentage of communities this size can Casey's serve? Well, if its home state of Iowa is any clue, that answer is roughly 80% or higher. These two simple stats highlight that despite being over 60 years old, Casey's may just be starting its growth story.

Furthermore, even though its expertise is within rural communities, it is not afraid to move into cities and urban centers as it steadily expands across the Midwest. With its recent acquisition of 94 Bucky's convenience stores and 48 Circle K stores, Casey's has set its sights on the major markets of Omaha, Chicago, and Oklahoma City. These acquisitions could be the beginning of a Domino's-esque geographic network, as Casey's aims to continue building upon its status as the fifth-largest pizza chain in the U.S. (by kitchen count).

Taking the long-term perspective, the company still only operates in 16 states and could feasibly eye the coasts or beyond as its final goal -- only time will tell. With cash on hand of $330 million and a debt-to-EBITDA ratio of only 1.9 times, Casey's is well-positioned to explore future acquisitions.

Simply put, I believe Casey's focus on communities naturally begets higher profitability, as they provide food options to many towns that are just considered drive-through areas to most businesses. Furthermore, this profitability is still in its nascent stages, both expanding to new rural communities and ultimately moving toward the coasts and the largest cities in the United States.

As always, especially with the increased allowance for fractional share trading, I believe it would be wise to dollar-cost average into a Casey's General Stores position. However, trading at a price-to-earnings (P/E) ratio of 23, the company's current valuation is quite reasonable compared to the S&P 500 average of 35.

Looking ahead to the next few quarters, I will be watching the company's inside sales gross margin and whether it can trend back above 40% as its customers begin to hit the road again in full strength.

An Investor's Look at Data Analytics
376%