It's the first day of the month, and that means that China's major electric vehicle manufacturers were out overnight with their latest delivery numbers. Demand for EVs in China has been strong, and shares of popular Chinese automakers gained ground following their respective releases. The question U.S. investors have is whether Tesla (TSLA -6.37%), which reports its delivery numbers quarterly, will prove to have had just as much success when it makes its own announcement.

Chinese EV manufacturer stocks were up across the board. XPeng (XPEV -0.96%) had the largest gain, rising almost 4% in pre-market trading. Nio (NIO -2.51%) also rose nicely with a 3% gain, and Li Auto (LI -2.94%) managed to post a 2% rise before the market opened for regular trading. 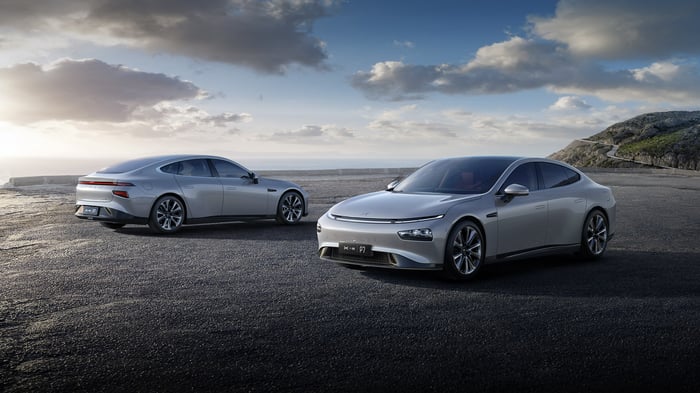 Predictably, the quality of the numbers matched up well with the respective gains in the stocks. XPeng had a huge month, with deliveries of 10,412 vehicles in September topping the 10,000 milestone and tripling from year-ago levels. The numbers included more than 7,500 P7 sports sedans and more than 2,650 G3 and G3i SUVs. XPeng also got a solid start with its P5 family sedans, which launched mid-month and accounted for 244 vehicle deliveries. For the quarter, 25,666 deliveries was a record, also tripling year over year. Year to date, XPeng has delivered more than 56,400 cars and SUVs, more than 300% higher than at the same time in 2020.

Nio's figures also showed considerable growth. With deliveries of 10,628 vehicles in September, Nio just barely topped XPeng's monthly total, with a record showing that was up 125% year over year. Deliveries included nearly 2,000 ES8 six- and seven-seat SUVs, more than 5,250 ES6 five-seat SUVs, and almost 3,400 EC6 coupe SUVs. For the quarter, Nio fell just short of XPeng at 24,439 deliveries, but that was double its year-earlier numbers and topped Nio's own forecast. Nio has delivered a total of more than 142,000 vehicles during its existence.

Finally, Li Auto had promising numbers compared to last year's results, but the company noted some pressures that weighed on its sequential performance. Monthly deliveries of 7,094 vehicles were more than double what Li delivered in September 2020. That brought third-quarter deliveries to 25,116, up 190% from a year ago and finishing right between XPeng and Nio. Year-to-date deliveries came in at 55,720, and Li has delivered almost 89,000 vehicles over its history. Yet co-founder Yanan Shen pointed out that deliveries were down from August's figures due to an extended shortage of semiconductor chips. The company is trying to meet demand, but that hasn't yet shown up in shorter waiting times for buyers.

What will Tesla say?

Tesla often waits a day beyond the beginning of the quarter to post its latest delivery numbers, although the fact that Oct. 2 is a Saturday might change that timeline. Most of those watching Tesla, though, are optimistic about its prospects for delivery growth even as they worry about impacts of supply constraints.

Tesla delivered 185,000 vehicles in the first quarter of 2021 and more than 201,000 in the second quarter. Continued growth at that pace would imply roughly 217,000 to 218,000 vehicle deliveries in the third quarter. Some Tesla analysts have even higher expectations, with the typical forecast around 233,000. That would potentially include somewhere around 66,000 to 67,000 vehicles in China, keeping Tesla ahead of its three Chinese rivals in the EV space.

At that pace, Tesla is well ahead of its forecast for 50% growth in 2021 to roughly 750,000 vehicles. If Tesla can keep motoring ahead even with supply constraints, it speaks volumes about just how strong the EV market is and how long the growth curve for Tesla, Nio, XPeng, and Li Auto could be.

Why Is Tesla Stock Falling If Its Business Is Stronger Than Ever?
376%