It's more important than ever for companies to protect their data, which could mean significant opportunities for investors.

Data breaches are more dangerous than ever for businesses. A breach can cost a company millions of dollars and damage a brand when consumers no longer trust a company to protect their personal information. That's why cybersecurity is such a growth sector right now and for the foreseeable future.

The cybersecurity market is currently worth about $156 billion and could more than double to $345 billion by 2026. Investors who want to benefit from this big-picture trend might want to consider two cybersecurity stocks operating on the cutting edge. 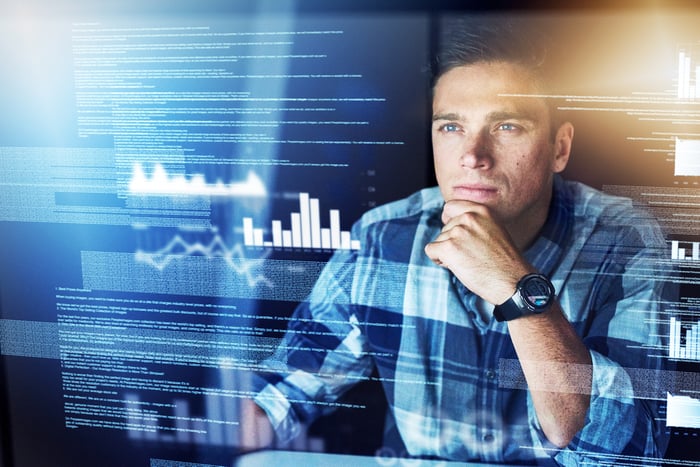 The problem with traditional security technology

Antivirus protection is what most of us grew up with; it's a form of "on-premise" software, meaning that the security is installed locally on the computer. Software updates are downloaded and installed on each device, keeping the antivirus program up-to-date.

We have seen the rise of various cloud-native software companies, whose products are "always-on" because they operate on the cloud servers that enable a computer to access it 24/7, meaning that cloud-based software is always up-to-date and active.

As hackers and their attacks become more sophisticated, the old on-premise solutions are less effective, enabling cloud-native cybersecurity companies like CrowdStrike Holdings (CRWD -4.57%) and SentinelOne (S -3.59%) to find success in the industry.

Antivirus software looks for "signatures," which are threats (a computer virus, for example) that occur. The antivirus company learns about it, then creates a software update for its customers so that their computers will recognize the threat if they encounter it. The problem with this is that it's reactive; it can only protect against what has already breached it.

CrowdStrike uses the cloud to create a network called the Falcon platform, which links all of its customers into a "living" network that operates in real-time. Put another way, when a computer on the Falcon platform encounters a threat, every other connection on the platform instantly learns from it. CrowdStrike has more than 13,000 customers, and its platform interprets more than 1 trillion data points per day.

As more connections join the platform, more data passes through it, improving the platform and creating a network effect that strengthens CrowdStrike's products. Technology research firm Gartner named CrowdStrike an industry leader for 2021.

Expected revenue for the 2022 fiscal year (calendar 2021) is $1.4 billion, a 60% year-over-year increase. CrowdStrike is a leader in the rapidly growing cybersecurity industry, so its cutting-edge technology could set up the company for solid growth for years to come.

At some point, the limits of the human brain become a bottleneck for performance. It could become harder for human analysts to keep pace with ever-evolving cyberthreats. SentinelOne is solving this as the first company to build an autonomous security platform powered by artificial intelligence.

Its software uses Storyline to map roughly 10 billion events each day, categorizing them into patterns. When an unusual event occurs, SentinelOne's AI analyzes it and addresses it if necessary, a process that takes milliseconds.

SentinelOne's platform is very effective; it's been scored a leader in endpoint security by Gartner, similar to CrowdStrike, its primary competitor. It has also won big-name customers, including Samsung, Sysco, Autodesk, Fiverr, and more.

This year, SentinelOne should do $189 million in revenue, a 103% increase over last year. Analysts expect it to maintain strong growth, estimating that 2022 revenue will grow 70% to $322 million and 66% the year after to $535 million.

Are these buys today?

Looking at the price-to-sales ratio of each company using estimated revenue for the current year, it's clear that each stock is trading at a premium.

SentinelOne commands a higher valuation because it's expected to grow more quickly (103% this year versus 60% for CrowdStrike). These high P/S ratios could give investors pause about buying the stock today, which is understandable.

The counterargument is each company's strong growth rate now and expected growth in the future. The cybersecurity market is enormous, and there is enough room for more than one company to succeed in the space, seeing as how each company appears to be highly regarded from a technology standpoint.

Investors could do well over the course of the next decade, thanks to strong growth rates burning off the premium P/S ratio over time. Investors who buy shares will want to make sure that growth continues to be strong over the coming quarters.