Buying Dividend Kings at fair prices is a one way to achieve strong total returns with lower volatility.

With the S&P 500 just 4% off of its all-time high, investors looking for safe and growing income are having to look much more closely than they did five or 10 years ago. Fortunately, there are still viable options for investors seeking income with reduced volatility.

Stocks that have raised their dividends for at least 50 years straight are referred to as Dividend Kings. Dividend Kings have historically provided the appealing combination of increasing dividends and more resilient stock performance through inevitable market downturns. Now that Dividend King Johnson & Johnson (JNJ 0.09%) is 8% off of its all-time high, let's look at why the recent weakness could be a buying opportunity for income investors. 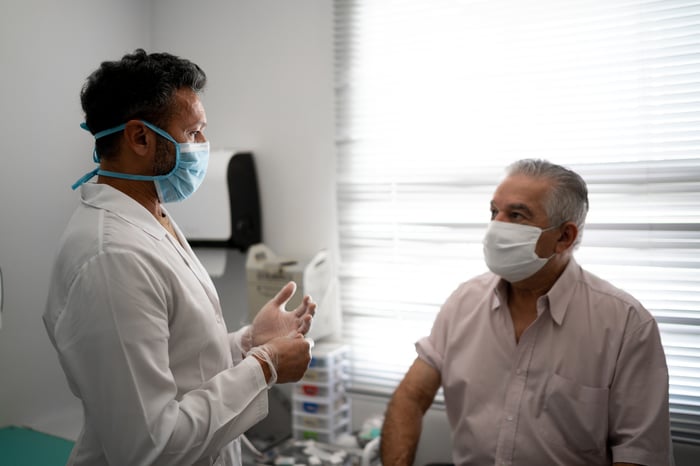 Recently, House Democrats put forth a bill that would allow Medicare to leverage its size and scale to negotiate lower drug prices with pharma companies. It's estimated that the approach would save the U.S. Government $500 billion over the course of a decade.

The bill hit a roadblock after a few moderate Democrats and many Republicans voted in opposition. Thus, it appears that the odds of passing the House and Senate to make it to the desk of the White House for enactment are rather low.

Despite the pressure on Johnson & Johnson's stock price as a result of the bill, the impact on a diversified healthcare company such as Johnson & Johnson would be about a 3% decline in total revenue.

Regardless of whether the aforementioned Medicare negotiation bill ever materializes, Johnson & Johnson is delivering satisfactory financial results, and this will likely not change in the foreseeable future.

Johnson & Johnson's Tremfya (approved to treat plaque psoriasis and psoriatic arthritis) was first approved by the U.S. Food and Drug Administration (FDA) in 2017, which should translate into revenue growth for the drug this decade and into the beginning of next decade. Tremfya's first-half sales soared over 40% year over year to $897 million this year, the drug is being widely accepted by doctors and patients across the world. Tremfya alone should be able to offset much of Stelara's post-patent cliff revenue declines.

Johnson & Johnson's blood cancer drug Darzalex was first approved by the FDA in 2015, which also gives the drug a growth runway extending beyond this decade due to patent protection. Darzalex's first-half revenue skyrocketed 50%-plus year over year to $2.80 billion this year, the drug is on track to record over $5 billion in sales in its sixth full year on the market.

Johnson & Johnson and AbbVie's (ABBV -0.37%) blockbuster oncology drug Imbruvica was first approved by the FDA in 2013 and won't likely face any competition from generic drugs until at least early next decade. And even though Imbruvica is closing in on a decade since its first approval, Johnson & Johnson's share of the drug's sales in the first half were up 13% to $2.24 billion.

Johnson & Johnson's well-positioned pharmaceutical segment explains why analysts expect the stock to grow its earnings per share (EPS) at 8.9% annually over the next five years.

With a great deal of earnings stability built into the foreseeable future, Johnson & Johnson is an ideal stock to own for the long term. I might argue that Johnson & Johnson was a buy near its 52-week high, but the company is much more compelling at the current price, especially since its long-term outlook hasn't changed in recent weeks.

At the current price of $163 a share, Johnson & Johnson is trading at 19 times its trailing 12 months' free cash flow (operating cash flows less capital expenditures), which is a tad below its 13-year median price-to-FCF of 19.7. This is moderately more attractive than when Johnson & Johnson was trading at its 52-week high of $179 a share and a price-to-FCF ratio of over 21.

Johnson & Johnson's beta of just 0.7 is a great fit for investors seeking a less volatile stock. A market-beating 2.6% dividend yield is just one more reason why the recent sell-off looks like a gift from the market to long-term investors.