Beachbody (BODY) is yet another in the parade of companies that went public via SPAC and surged on initial excitement but have since fallen out of favor with investors. Beachbody plummeted from its 52-week high of $18.20 to under $6 at time of writing. Based on this performance, Beachbody seemingly has little in common with a high-flying growth stock like Peloton (PTON 13.00%).

But the market is ignoring the possibility that Beachbody could become the next Peloton, currently trading at a bargain level, if it can become a fully fledged digital fitness ecosystem. 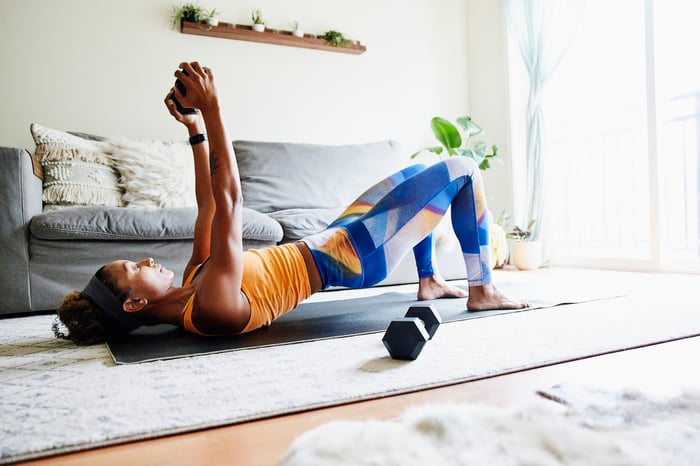 Beachbody is building up an extensive library of live and on demand digital fitness content. The sense of community created by live Peloton classes contributes to Peloton's brand loyalty, driving sales of their exercise bikes. Beachbody has the tools at its disposal to tap into a similar sense of community on its highly interactive platform.

After a SPAC merger with MYX Fitness Holdings, a maker of connected fitness devices, Beachbody is now selling the MYX bike. The MYX II ($1399) is priced similarly to the newly reduced standard Peloton bike ($1495), while the enhanced MYX II PLUS ($1599) represents a more affordable price point than Peloton's Bike+ ($2945). The MYX bikes have several features that make them unique compared to Peloton's offerings, such as a 360 degree swivel screen useful for engaging with other types of workouts in Beachbody's library. Peloton has passionate fans who believe that the Bike+ is worth the premium, but there is also a potential segment of customers who prefer the lower price point of the MYX II PLUS which still offers many of the same features as Peloton's bike. The monthly price of $29 for a subscription to MYX classes from Beachbody compares favorably to Peloton's $39 monthly price.

Beachbody is also building the highly sought after recurring subscription revenue at an impressive rate. Beachbody grew its digital subscriber base across its platforms from 300,000 in 2015 to 2.6 million in 2021. With 2.6 million reported subscribers, Beachbody now has a larger user base than Peloton's reported 2 million subscribers. In addition to these impressive growth numbers, Beachbody also boasts a 96% digital subscription retention rate, which is similar to Peloton's impressive retention rate which hovers in the mid-90 percent range. As Beachbody continues to grow its subscription base, the market should reward the company for its transformation into a digital fitness company with a steady recurring revenue stream.

Beachbody is quietly building a flywheel, which when fully realized, allows different business segments within a company to feed into (and turn a profit for) each other. With a variety of platforms and verticals, Beachbody has the potential to cross-sell a lot of products to its significant subscriber base.

Co-founder and CEO Carl Daikeler highlighted the company's cross-selling acumen on the Q2 earnings call, stating "What's unique about our business model is we've created a compelling value proposition for our customers, so they have all the tools they need to get healthy in one place... For $99 a year... we bundle our Beachbody On Demand digital streaming platform, along with discounts on various Beachbody nutritional products based on a customer's specific needs."

Customers can buy a MYX II bike and then pay a monthly subscription for fitness classes, or a customer may buy nutrition products from Beachbody because a fitness influencer coaching the class touted this product. Beachbody has some interesting developments here, with exciting new brands like Ladder (founded by Lebron James), complementing its core Shakeology line. Daikeler also noted that while the company is newly public, it is executing on its "refined approach to direct marketing over the past two decades." Daikeler also lauds Beachbody's self-described "army" of "400,000 micro influencers" and coaches, who drive sales and promote the company's products, as a key competitive advantage unique to Beachbody.

Beachbody has no debt and will use the proceeds from its SPAC transaction to boost its marketing and customer acquisition spending. This is a prudent use of capital-using this funding to make a 'land grab' for new customers now will allow Beachbody to leverage its cross-selling abilities and increase the lifetime values of new and old customers.

After the drastic sell-off over the past few months, the current valuation of Beachbody offers an attractive entry point for an underappreciated but growing business that is transforming into an all-encompassing digital fitness ecosystem.

With over 2.6 million subscribers and counting, the ability to cross-sell a wide variety of fitness products ranging from classes to nutrition supplements to this growing customer base, and an infusion of cash from going public to further boost customer acquisition and marketing, Beachbody is in a strong position to become a dominant platform in the fitness landscape. As Beachbody executes on this transformation, it could deliver Peloton-like returns for shareholders in the years ahead.

Why The Beachbody Company Stock Dropped as Much as 16.5% in Early Trading Today

Why The Beachbody Company Stock Plummeted 27.5% at the Open Today
376%