The online secondhand marketplace had a recent IPO.

2020 was quite a year for initial public offerings (IPOs) with 407 new stocks on the market -- more than double the year before. But that's nothing compared with 2021. There have already been 767 IPOs -- and it's only October.

Part of what's fueling the IPO stream is the current craze for SPACs (special purpose acquisition companies). SPACs bring companies to the market in a way that's supposed to give more opportunity to the masses to buy shares previously only available to institutional investors.

One recent IPO is ThredUp (TDUP -2.74%), which went public in March and is slightly up. Let's see what might cause investors to take a closer look. 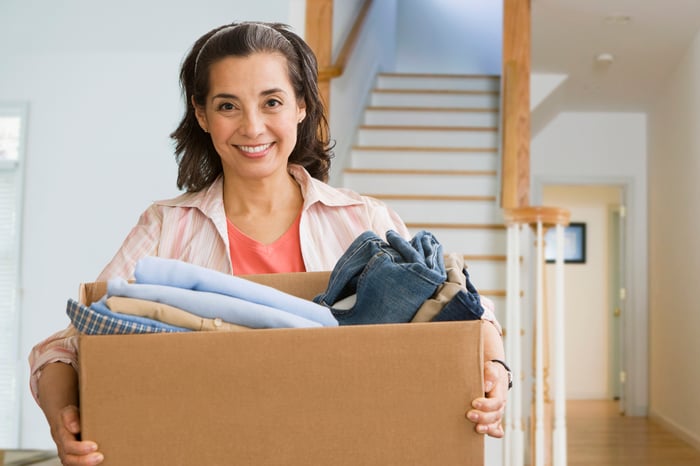 ThredUp is an online resale shop, which means it's the country's biggest thrift shop. The Oakland, California-based company was started by co-CEO James Reinhart in 2009 when he was a college student with a closet full of wearable clothing he didn't want anymore. It buys secondhand clothing in perfect condition and then resells it on its website. As simple as that sounds, the company has managed to create a number of programs that feed into this model and make it stand out in retail. Its core program involves sending clean-out kits to customers, making it easy to collect their clothing and send it into a distribution center, and they get paid in money or credit to Thredup. Second, it has a resale-as-a-service program, where customers get paid for their items through store credits to partners such as Gap and Michael Stars, and those stores get second-hand inventory from their brands.Third is its white-label resale shop, where a store has its own, branded resale site, and it recently launched its first for Madewell.

The company says that resale is the fastest-growing segment in clothing retail, putting it in a strong position as one of the largest resale companies in the U.S. Its model, where customers can be on both sides of a transaction, powers its flywheel and builds customer loyalty as customers become both buyers and sellers. This is borne out in 80% of orders coming from repeat buyers.

This has been playing out nicely for the company, which posted a 27% sales increase year over year in the second quarter, and a 34% increase in profit growth. It has 1.3 million customers, and it filled 1.2 million orders in the 2021 second quarter.

ThredUp sees a large and growing market opportunity with the secondhand clothing market; that market increased at a compound annual growth rate (CAGR) of 23% from 2020 to 2025 to reach $76 billion, according to a GlobalData survey. . It's also acquiring European resale company Remix, opening up a new market, which it expects to grow to $39 billion by 2025.As the leader in the industry, ThredUp is uniquely placed to tap into the market.

How can ThredUp harness the opportunity? Firstly, it needs to increase awareness. The vast majority of orders are coming from current buyers, which means it needs to find new customers to keep growing. It's marketing efforts include traditional advertising, social media, influencers, SEO, referrals, and more.It's already using a data-based model to determine pricing, and I'd like to see it use those resources to identify new market opportunities and customers.

Net loss in the second quarter increased from $6.7 million in 2020 to $14.4 million in 2021, and it widened each fiscal year from 2018 through 2020. That's typical for a growth company, but it's something investors should watch. As the company scales, and its expenses decrease and investments pay off, it has a path toward profitability. For the third quarter, it's expecting revenue to increase between 78% and 84%.

ThredUp stock hasn't been a great performer so far, gaining 8% since its first-day closing price as of this writing. Shares are on the pricey side, trading at about 7 times sales. It has an intriguing business and a way to grow; as revenue increases and it begins to post a profit, it could turn out to be a good investment. It's a stock to keep on your watch list.