The innovative cloud network and security specialist announced some new products. One of them could shake Amazon.

Let's see how Cloudflare could capture a part of that significant cloud storage market. According to AlliedMarketResearch, the cloud storage market should grow at a compound annual rate of 22% by 2027 to reach $222 billion. If the company's new additions measure up, it could make for a good investment. 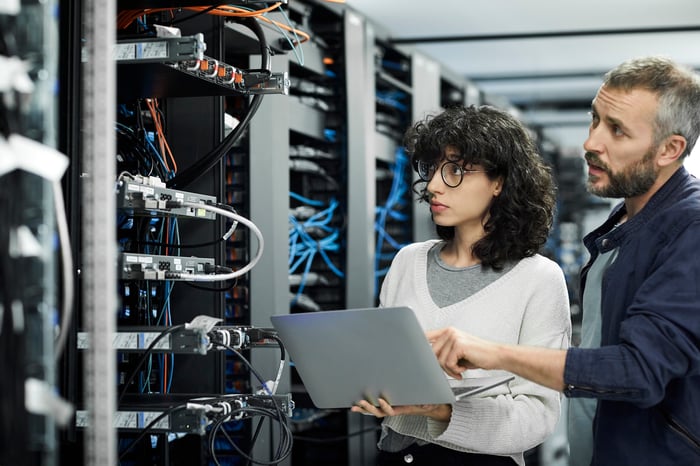 Cloudflare has been building a cloud network across more than 250 cities worldwide to accelerate users' access to online services. It also provides cybersecurity services to protect the online resources it hosts and manages.

The company has managed to grow its platform with new solutions that generate cross-selling opportunities with its existing offerings. For example, management highlighted during the company's investor day in February that 88% of contracted customers use at least four products, up from 70% 18 months before. Cloudfare's innovative offerings have also attracted more than 126,000 paying customers, up 32% year over year, which led to $152 million of revenue during the last quarter, up 53% year over year.

But the cloud network and cybersecurity specialist isn't resting on its laurels. Last week it revealed many new products that will leverage its existing network infrastructure. The offerings included:

But it was actually another feature that really captured my attention, and it was one that hasn't launched yet (and the company hasn't said when it will.) Cloudflare revealed a cloud storage offering, Cloudflare R2 Storage, which will allow customers to host any kind of file in the cloud. Cloud storage isn't new technology at all -- Amazon launched such a solution in 2006. But the disruptive aspect of Cloudflare's product resides in pricing.

Typically, cloud storage services are billed based on volume. Cloudflare will charge this service at $0.015 per gigabit (GB) of data stored per month (for perspective, a one-hour video file at standard quality requires roughly 1 GB to 2 GB of storage.) The comparison with AWS isn't trivial as many options complicate pricing, but typically the cloud giant charges in excess of $0.021 per GB per month for standard storage. However, Cloudflare's lower storage pricing isn't the big deal here. Amazon also charges customers when they get their files out of the AWS environment (egress traffic), which happens when downloading a file hosted on AWS to the internet, for instance.

Although pricing depends on many parameters, AWS charges at least $0.05 per GB for transferring data to the internet for volumes in excess of 1 GB per month. So the bill can become significant when many users download large files from AWS' environment. Cloudflare announced that it will offer egress traffic at no cost, which represents a huge benefit for customers. The company will leverage its existing infrastructure, agreements, and peerings (connectivity) with internet service providers to support such an initiative.

That should attract developers who will more likely use Cloudflare's paying services associated with the company's attractive cloud storage offering. AWS includes a broad ecosystem of products and services that complement its historical cloud storage capabilities which will limit its customers from transitioning to Cloudfare immediately. But Cloudflare's innovative offering may pressure Amazon's AWS high margins going forward.

During the second quarter, AWS' operating margin reached 28% on $14.8 billion of revenue (Amazon doesn't disclose the individual performance of its cloud storage business.) Cloudflare however, has been generating losses which ultimately renders operating margin an inadequate comparison (negative operating margin of 19% during the last quarter.) The negative margin has been primarily due to the fact it has been prioritizing its growth to gain scale. This is evidenced by the company's introduction of several products and its work to bring Cloudfare R2 Storage forth.

When considering Cloudflare's current operating performance (net loss of nearly $36 million last quarter), the stock looks pricey. Despite the losses, the stock has increased nearly 200% over the last 12 months, implying that the market sees potential past the initial glance. It's trading at a high forward price-to-sales (P/S) ratio of 58 despite a 16% drop since Sep. 23 in the context of the broader September market sell-off. In comparison, Cloudflare's competitor Fastly (FSLY 2.57%) is trading at a less demanding P/S ratio of 14, partly because of its lower top-line growth, though.

Yet investors should consider adding the stock to their portfolio. Cloudflare's disruptive cloud storage initiative and other new products should keep attracting customers and generate cross-selling opportunities. In addition, its expectation of using existing infrastructure for the new products could possibly lower expenses relative to the revenues it generates. This could help the company as there's plenty of room to grow in its addressable market that management estimated at $100 billion by 2024.

Should You Buy Cloudflare's Stock on the Dip?
358%