Affirm is competing in the buy-now, pay-later industry, but its long-term ambitions appear to go well beyond

Affirm Holdings (AFRM 3.52%) which trades on one of retailing's oldest concepts -- buy now, pay later (BNPL) -- recently held a presentation where it unveiled products that will expand its reach in the consumer-finance market. The bigger message, though, is that Affirm may have the ambition and potential to become more than just a purveyor of BNPL services.

1. It's rapidly building its network

Affirm's growth will depend on how it can expand the network of partner merchants and the number of consumers who shop through its platform. In other words, Affirm needs to deeply penetrate the retail landscape. 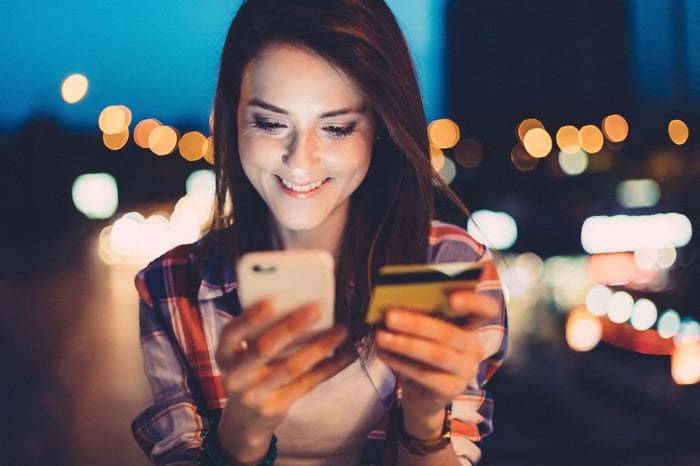 Traditional credit card companies have long held a grip on short-term consumer borrowing, but BNPL has become an increasingly popular alternative. Affirm enables consumers to make purchases with a fixed number of installments without hidden fees, charges or compounding interest rates. Merchants partner with Affirm, where consumers tend to buy more often and spend more on every order. Shoppers average an 85% higher order value on average, and a 20% higher repeat purchase rate compared to other retail channels.

Affirm's value as a sales tool has lured major e-commerce merchants as partners, including Amazon, Shopify, and Walmart. These are all relatively new relationships; Amazon is in testing, Shopify launched its installment program (Shop Pay) during the summer, and Walmart recently said it was replacing its layaway consumer-credit program program with Affirm's BNPL services.

Amazon, Shopify, and Walmart are the top three e-commerce players in the U.S., with 53% of e-commerce sales in 2020 and hundreds of millions of customers. Affirm had just 7.1 million active consumers on its platform as of the fiscal 2021 fourth quarter ended June 30. The company's membership could easily get a significant boost as partnerships with these giant retailers get up and running.

2. New products are going beyond BNPL

Affirm management recently hosted an investor forum, unveiling several new products and services that give a glimpse of its long-term road map. The star of the event was the Affirm Card, which links to a consumer's existing bank account. Users can pay for things with the Affirm Card just like they would with an ordinary debit card but will have more options, such as the ability to break certain transactions into BNPL installments.

Affirm also unveiled its SuperApp, which could function as an "all-in-one" smartphone app where customers can access a variety of financial services. It also  announced plans to introduce cryptocurrency investing. Chief Executive Officer Max Levchin didn't give too many details at the presentation. Still, it seems as if the company intends to expand beyond BNPL lending, and further into the ecosystem of consumer finance.

The Affirm Card combined with the SuperApp could give users the ability to store funds, invest, and borrow, all from Affirm's platform, taking a page out of SoFi's playbook of offering a single tool for how consumers manage their money. Perhaps we could see Affirm eventually move to create a digital banking system to compete in the sprawling financial landscape that includes traditional brick-and-mortar banks, as well as other fintech companies like PayPal and Square.

3. Growth is poised to remain strong

Affirm's stock carries a $31 billion market cap, so while it's not nearly as big as the PayPals and Visas of the world (their market caps are in the hundreds of billions), it's not exactly a small company, either.

In its 2021 fiscal year, the company had gross merchandise volume (GMV) of $8.3 billion, the total value of the transactions on its platform. The full rollout of Shopify's Shop Pay (an installment-payment option offered through Affirm) and Amazon have contributed little or nothing to Affirm's GMV to this point.

Consider that Amazon's sales in North America (excluding Amazon Web Services) during the past 12 months were $266 billion, while Shopify did $120 billion in GMV in 2020. Affirm's GMV of $8.3 billion is roughly 2% of what Amazon and Shopify do alone, without factoring in its other partnerships with merchants including Nike, Peloton, Expedia, and more. Affirm's revenue is 6% to 8% of its GMV, so Affirm's revenue from these partnerships might wind up at as much as $30 billion.

Not everyone who shops on Amazon or Shopify will use BNPL services so it's unlikely it will capture all of that potential revenue, but it's clear from the immense size of these companies that the implementation of BNPL will create enormous tailwinds for Affirm.

In the face of all this positive news is the reality that investors will need to be patient. The complete integration of BNPL services on Amazon, Walmart, and Shopify will take time to filter through to Affirm's financials. Levchin said in a recent interview that the Affirm Card will likely begin going to customers by early next year.

Affirm won't become a titan of the fintech world overnight; it will take years of execution and additional innovation and evolution. What the company has accomplished so far is impressive and has given me faith in Levchin's ability to take it to new heights. We will see just how high Affirm can go.