One of them looks like a better bet to bounce back than the other.

The stock market remained choppy on Wednesday, but certain segments of the market held up better than others. As of 11:15 a.m. EDT, the Nasdaq Composite (^IXIC) was down 52 points to 14,382, but the index had been off nearly 200 points at one point earlier in the session.

Technology stocks have generally done quite well over the long haul, and that's helped bolster the Nasdaq to greater performance than some of its stock market index peers. However, analysts on Wall Street are starting to look more critically at some of the companies that have done well in the space. On Wednesday, shares of Seagate Technology (STX 0.62%) and CDW (CDW 1.36%) were broadly lower, as some negative comments from professionals following the stock raised questions about their ability to keep participating in the longer-term tech rally.

Morgan Stanley takes the wind out of Seagate's sails

Shares of Seagate Technology were down almost 6% on Wednesday morning. The maker of hard disk drives and other computer storage solutions got negative comments from analysts at Morgan Stanley as part of a broader set of negative comments about hardware companies in general. 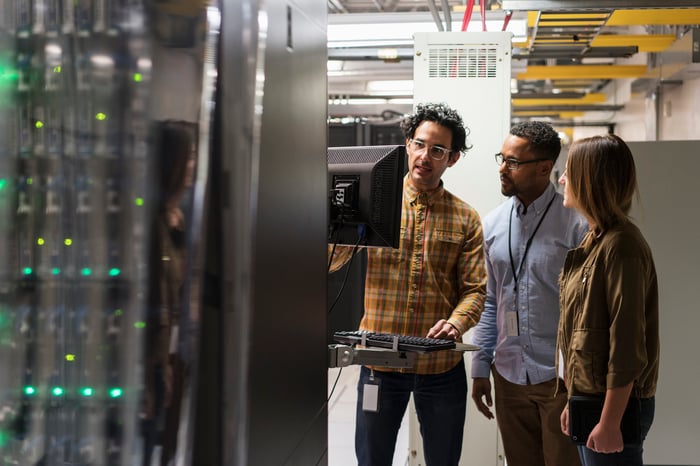 Morgan Stanley downgraded Seagate from overweight to equal weight. Moreover, the Wall Street giant cut its price target on Seagate by $30 per share to $88. That new level is just barely above where the stock opened the day, effectively taking away all of Seagate's growth potential in Morgan Stanley's eyes.

The downgrade comes amid comments that apply more generally to the hardware subsector within technology. Morgan Stanley points out that hardware-focused stocks have underperformed the S&P 500 by double-digit percentages over the past four months, and they've generally been the poorest performers within the tech sector. Moreover, with the stock market going through what the Wall Street company sees as a cyclical transition that could prompt greater weakness overall, Seagate and its peers aren't in a favorable position right now.

Seagate had done extremely well early in 2021, but the stock has lost its upward momentum. Comments like Morgan Stanley's won't do anything to restore confidence, and it'll likely take renewed interest in hardware-oriented companies to bolster share prices from their recent declines.

In a similar vein, CDW saw its stock drop nearly 6%. It also saw a downgrade from Morgan Stanley, with some of the same themes prevailing as Seagate.

CDW also got downgraded from overweight to equal weight. However, the decline in its price target was less extreme, dropping $12 to a new target of $196 per share.

Yet the tone on Morgan Stanley's comments about CDW was quite a bit more positive. The Wall Street giant believes that CDW has bullish prospects over the long haul, pointing instead to extremely high valuations as a potential risk going forward. It was also critical of CDW's exposure to the PC market.

CDW's emphasis on small and mid-sized businesses has been a big part of the IT consulting company's success recently. With the COVID-19 pandemic, many of these smaller businesses had to get their digital transformation plans in place quickly in order to survive. That led to higher sales and profits for CDW.

Of these two companies, CDW looks to have the better prospects. Companies continue to need strategies for cloud computing adoption and network security, and CDW sees ample opportunities for consolidation in the IT services industry. That combination gives CDW a greater chance of rebounding than Seagate.

Stock Market Today: Why Netflix, First Solar, and CDW Are on the Move
370%