Revenue growth rate is set to slow for the e-signature company's next quarter, but its addressable market remains large.

Shares of DocuSign ( DOCU 6.51% ) fell by 13.1% in September, according to data provided by S&P Global Market Intelligence.

This decline takes the electronic signature company's year-to-date gain to a still-respectable 15.7%. 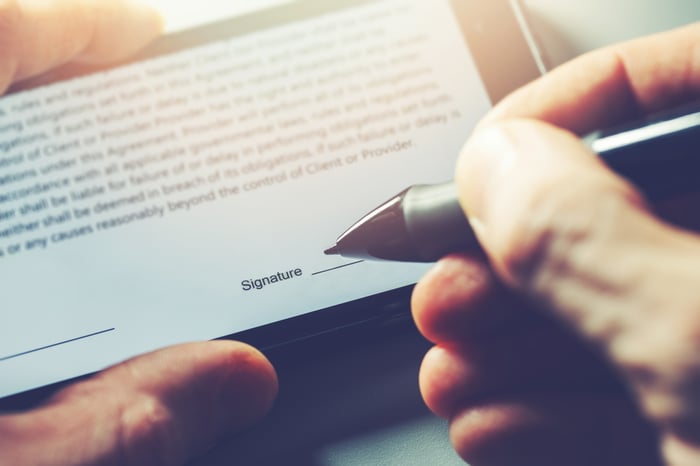 DocuSign released its fiscal 2022 second-quarter earnings during the month, and it turned out to be yet another sparkling set of earnings. In fiscal Q2 2022, which ended July 31, 2021, total revenue climbed 50% year over year to $511.8 million, of which subscription revenue made up 96.3%. Billings surged by 47% year over year to $595.4 million while gross margin increased to 78% from 74% in the prior year's quarter.

The company narrowed its net loss significantly from $64.6 million a year ago to $25.5 million, and half-year net loss clocked in at $33.9 million, less than half of the prior year's $112.4 million. Free cash flow also improved from $99.8 million to $161.7 million for the quarter, demonstrating the e-signature company's cash generation capability.

Yet, despite these good results, investors were probably more focused on DocuSign's revenue guidance for its third quarter. The company expects total revenue to be in the range of $526 million to $532 million, up around 38% year over year from the prior year. The concern is that DocuSign's revenue growth may be slowing, as fiscal 2021's third quarter, ended Oct. 31, 2020, registered a 53% year-over-year revenue increase. There are also worries that the surge in electronic signature adoption may be pandemic-related; and with the crisis easing, this could jam the brakes on DocuSign's customer acquisition rate.

The company continues to see huge potential for its Agreement Cloud to grow its market share and build on its strong revenue base. Along with automation and artificial intelligence, DocuSign estimates that its total addressable market for smart solutions is around $50 billion. Total customers grew from 892,000 to 1.05 million in just six months while the number of enterprise customers increased from 125,000 to 148,000 over the same period, showcasing healthy momentum in capturing new business.

And in an effort to improve its communications strategy, DocuSign hired its first chief communications officer, Cameron Scott. Scott has more than 20 years of experience working in marketing and branding roles at Microsoft and GoDaddy, and he'll help to curate the company's content strategy to showcase the attractiveness of its core Agreement Cloud product.

Is DocuSign Stock A Buy At Current Levels?