Ever since Cardano's (ADA 2.00%) much-anticipated Alonzo hard fork -- or a radical change in a blockchain's protocol on Sept 12, which enabled self-executing, programmable agreements (smart contracts) on its blockchain -- investors have been dumping the network's native ADA coins. Indeed, the value of ADA has fallen by about 25% from its all-time highs last month.

As the old investing saying goes, "Buy the rumor, sell the news." Looking back, it was clear that the Alonzo fork was such an event. But now that the news has been sold, it's time to look forward and find out if there's a recovery inbound. 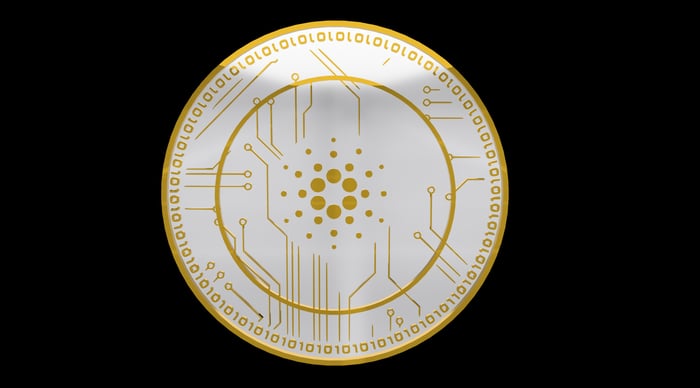 With much of its prospects already baked into its $70 billion market cap, now's the time for Cardano to live up to its expectations. Unfortunately, Cardano projects are still in their infancy. The top five peer-to-peer software projects (decentralized applications, or dApps) under development on its network are:

Most of these projects aren't set to launch until late 2021 or 2022. But the most promising is CNFT.io, which is already live. Trading volume on the platform recently surpassed six figures per day. Nevertheless, many skeptics claim that it would take years for these services to justify ADA's sky-high market cap -- but that's not necessarily the case.

Not entirely a gamble

It's important to note that while the fundamental value of its projects is lacking, it wouldn't be that difficult for Cardano to catch up. Take the case of OpenSea.io, an NFT marketplace built on the Ethereum blockchain. In the past year, transaction volume went from next to nothing to over $3.4 billion per month. Next, there's DEX Uniswap, which is also built on the Ethereum blockchain. The volume of crypto trading on the platform has surpassed $900 million per day even though Uniswap only went live late last year. Finally, Ethereum-inspired crypto borrowing and lending platforms like Aave have seen over $18 billion in total deposits during the same period.

Right now, the Cardano network is much faster, consumes less energy, and charges less in fees than Ethereum. That last point is especially important, as it can cost hundreds of dollars on the Ethereum blockchain to execute smart contracts, such as to buy and sell NFTs or take out an asset loan. The base transaction fee on the Cardano network is about 97.3% lower.

As a result, Cardano will have a lot of opportunities to monetize its technological edge over Ethereum in the next year. Furthermore, Cardano developers recently attained a partnership with Chainlink. The deal would enable Cardano smart contracts to link their execution to real-world data like price feeds, weather patterns, election results, consumer transactions, economic indicators, and more, just like how these data are incorporated in clauses in regular contracts. Therefore, I would consider buying the promising coin on the dip using a small amount of capital.