PepsiCo reported better-than-expected revenue and cited a few causes for the boost.

PepsiCo (PEP -0.37%) reported fiscal third-quarter earnings earlier this week, and some of the details in it could bode well for Coca-Cola (KO -1.05%). PepsiCo had another excellent quarter of revenue growth -- so much so, that it raised expectations for fiscal 2021. Coca-Cola is scheduled to report its fiscal third-quarter results on Oct. 27.

While PepsiCo manufactures and sells snacks and beverages, the companies are exposed to similar macroeconomic forces. Therefore, a trend that benefits PepsiCo is likely to benefit Coca-Cola, albeit to a different degree. 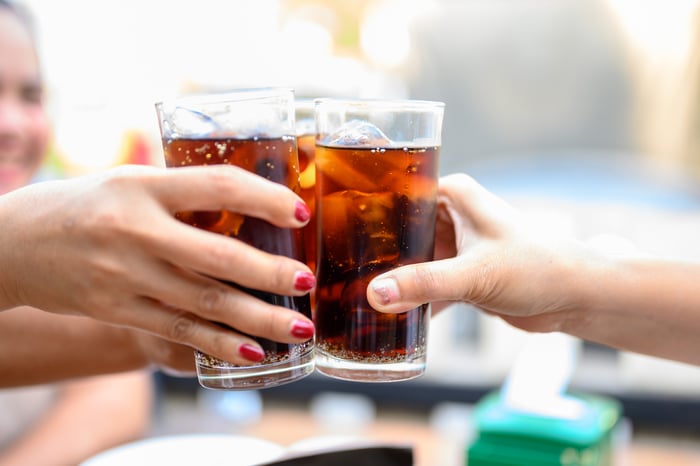 And two such trends PepsiCo benefited from in its most recent quarter were a decrease in consumer price elasticity and increases in consumer mobility as economies reopened. Let's look at how those forces could benefit Coca-Cola.

1. Consumers have been willing to pay higher prices

"What we're seeing across the world is much lower elasticity on the pricing [than] we've seen historically, and that applies to the developing markets, Western Europe, and the U.S. So, across the world, the consumer seems to be looking at pricing a little bit differently than before."

The price elasticity Laguarta mentions has to do with a marketing theory about product demand relating to price changes. The prices of some goods are very "inelastic." A reduction in the price of gasoline doesn't really increase demand much and an increase in price doesn't hurt demand either. People need gas to get around and will pay whatever price. Other products' pricing is more elastic, so price changes can cause substantial changes in demand or in supply.

Laguarta was saying the company expected consumers to purchase fewer PepsiCo products because it had raised prices to account for higher production costs. PepsiCo has likely studied this pricing relationship historically and had come up with estimations on how much sales would decrease with an increase in prices.

Whatever those calculations were, the company's most recent quarterly results showed better-than-expected sales, despite the price increases. Laguarta offered up potential reasons for this, including that shoppers were more focused on brands they were loyal to than on the pricing or that they were shopping at a quicker pace to remain inside the store a shorter time and had less time to comparison shop.

That could be good news for Coca-Cola because it is likely experiencing the same trend. It probably raised prices in the current quarter, and unit sales may have decreased less than expected.

2. The economic reopening is amplifying tailwinds

At the pandemic onset, folks were staying home more often, which led to decreasing sales at away-from-home channels like restaurants, movie theaters, convenience stores, and so on. Interestingly, Coca-Cola has a larger market share in the away-from-home channel, having spent years cultivating exclusive relationships with restaurants and entertainment venues. As a result, Coca-Cola's sales were more negatively affected than PepsiCo's during the worst parts of the pandemic. While both companies stand to benefit from economic reopenings, Coca-Cola will likely experience a more robust tailwind.

That's undoubtedly good news for Coca-Cola, which stands to benefit more from sales in away-from-home channels. Its stock is trading at a reasonable forward price-to-earnings ratio of 23.89. Investors considering buying shares of the beverage giant before it releases earnings on Oct. 27 should feel good about that decision, based on what PepsiCo management was reporting.