Please ensure Javascript is enabled for purposes of website accessibility
Log In Help Join The Motley Fool
Free Article Join Over 1 Million Premium Members And Get More In-Depth Stock Guidance and Research
By Sophie Ding – Oct 8, 2021 at 7:08AM

It's strengthening its crucial streaming operations, with plenty of other divisions just waiting to bounce back.

Disney (DIS -1.23%) hasn't been having a great 2021. The stock has severely underperformed the S&P due to a host of delta variant-related issues, which have delayed travel recovery and media production. However, this doesn't mean it's time to dump Disney -- this slump is actually an opportunity to buy a stock with great potential for the eventual post-pandemic recovery.

So how bad are things right now? To start, Disney's stock has barely moved all year -- it's fallen roughly 2%, compared to the S&P's 17% gain.

Most recently, Disney CEO Bob Chapek revealed that production delays would result in the company's flagship streaming service Disney+ having a lighter-than-expected slate of programming in Q4, negatively impacting Disney+ subscriber growth. These delays, caused by the COVID-19 delta variant, only add to Disney's existing COVID-related struggles with its parks, movies, and cruise businesses. 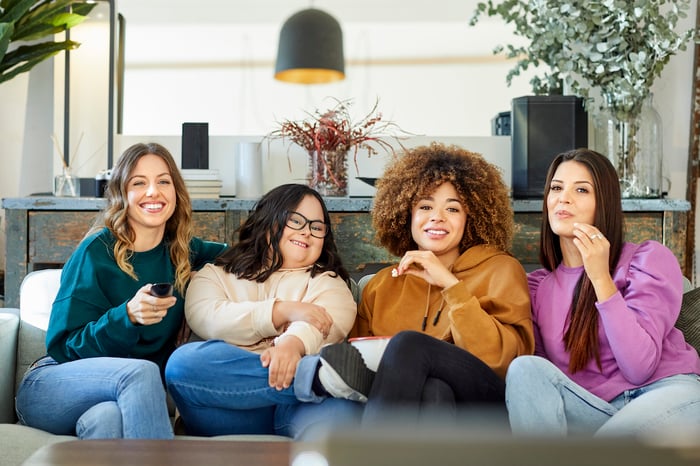 A strong competitor in the streaming wars

The streaming market has grown fragmented and crowded with competing services from powerful and well-funded tech names. While this competition is often described as a streaming war, it can be more accurately described as a content war -- one in which Disney has an advantage, thanks to its experience producing its own content.

For example, Alphabet's (GOOGL -0.94%) YouTube, although it has directly produced some content, mostly serves as infrastructure for independent creatives. Netflix (NFLX -0.23%) produces many original series, but its IP lacks the massive name recognition and brand value of Disney's. Notably, Disney's IP, unlike most original titles on streaming services, also helps it sell physical merchandise.

As the recovery progresses, watching Disney's streaming subscriber numbers will be very important. Digital TV Research predicts three platforms will control around half of all streaming subscriptions globally by 2026, led by Disney+ after it overtakes Netflix in 2025. Disney+ will add a significant proportion -- 43% -- of users in Asian countries via its Hotstar brand, making Disney's access to non-U.S. markets another driver for growth.

Simultaneously, factors like the U.S. cord-cutter movement, which can help Disney's streaming business there, may simultaneously hurt Disney's traditional TV business. That segment is also a pillar of the company, so Disney needs to make up for TV subscriber losses with additional streaming subscriptions. For example, ESPN is another unit that has suffered in the pandemic -- a dramatic drop in live sports events has also led to fewer ESPN viewers and subscribers.

According to Nielsen, the percentage of Americans who watched traditional TV during the week fell from 92% in 2019 to 87% in 2020. Consumers spent more time at home than ever -- but they were watching streaming services instead. Nielsen called the pandemic a "catalyst for streaming services" in a June 2021 report showing streaming has risen to 26% of all time spent on TV, ahead of 25% for broadcast. It's necessary for Disney to invest well in producing Disney+ content to keep engagement up.

Disney+ marks just the latest entrant in the company's history of innovation. It has a proven track record of success in multiple lines of business, including cruises, theme parks, film, and cable news. Its early success in streaming, despite a later entrance, and deep IP portfolio positions it well for the streaming wars in an increasingly fragmented streaming landscape.

Disney's diversified strategy proves the company can survive even with the pandemic's hit to park revenue, as it has been doing so far. When the pandemic is over, revenue will only increase (along with share price) as travel revenue starts flowing again.

Every business line Disney operates was popular before the pandemic, and every business line will continue to be popular post-pandemic. This stability makes Disney more attractive than companies that rose to fame amid the rise of stay-at-home culture, such as Zoom and Peloton.

Disney has weathered the downturn well, remaining stable despite major disruptions in core business areas. Its long-term growth outlook looks favorable, because Disney will likely return to generating significant revenue from all business areas, not just some. Investors have correctly sized up the company's lackluster growth potential for the year ahead. However, Disney seems poised for positive growth potential down the line, if it can successfully pair its prospective dominance in streaming with post-pandemic recoveries for its other business lines.