These three companies should be able to grow sustainably for the next five to 10 years.

There are a lot of...interesting stocks on Robinhood's Top 100 list. From Nikola Motors (NKLA 9.62%), which is a known fraud with zero revenue and a $4.2 billion market cap, to multiple companies that added "blockchain" to their name to ride the recent excitement in cryptocurrencies, there are a lot of high-risk investments people are making on Robinhood right now. It is likely most will not turn out well in the long run. 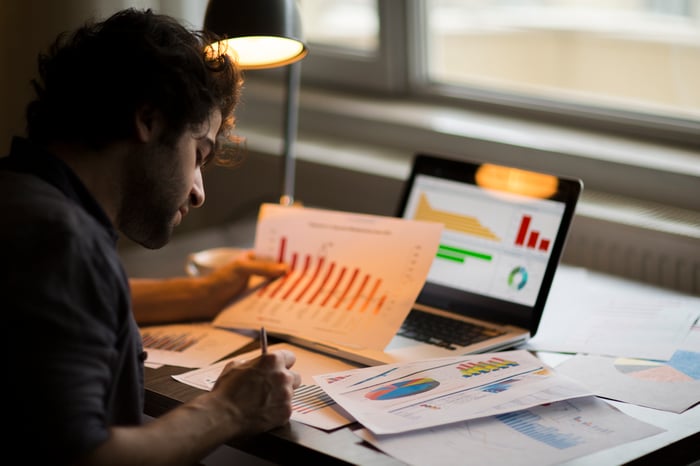 Alphabet, the holding company that owns Google, is one of the largest companies in the world by market cap, worth around $1.8 trillion. Its core business, which houses Google Search, Adsense, YouTube, and Android, is firing on all cylinders.

In the second quarter, revenue from Google Services grew 63% year over year to $57 billion. This growth is coming from all parts of the business, but one asset that is doing phenomenally well right now is YouTube, which grew advertising revenue 84% year over year in Q2 to $7 billion. On top of this, Google is seeing strong margin expansion, with Google Services' operating margin going from 27.2% last year to 39% this year in Q2.

Looking at other parts of the business, Google Cloud is growing quickly, hitting $4.6 billion in revenue in Q2, up 54% from 2020. However, right now Google Cloud is still unprofitable with a $600 million operating loss in the quarter. If you believe the cloud business can get to profitability like Amazon Web Services (AWS) and Microsoft Azure, then it looks like Alphabet's consolidated profitability is being understated at the moment.

Over the last 12 months, Alphabet has generated around $58.5 billion in free cash flow and has steadily started to reduce its share count through share buybacks. Couple this with the fact that Alphabet is still investing heavily into growth projects like Google Cloud and Other Bets, and investors should expect annual free cash flow to grow at a steady clip over the next five to 10 years. All these factors should add up to strong shareholder returns. 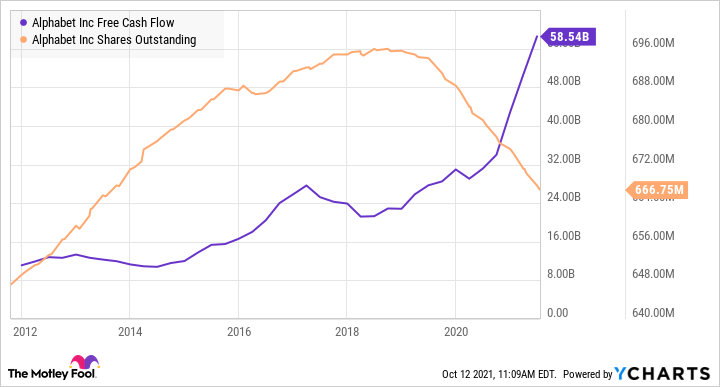 Unlike Alphabet, which has been a publicly traded company for over a decade, Roblox just started trading through a direct listing this spring. Valued at a market cap of $42.4 billion, Roblox is a platform that builds tools for video game developers to build games and interactive experiences for consumers. It has millions of developers building experiences and had 43.2 million daily active users (DAUs) at the end of Q2.

Over the last few years, Roblox's platform has ballooned in popularity around the world. In Q2, bookings (the revenue equivalent for video game companies) grew 35% year over year to $665.5 million. This might not seem that fast, but it is coming on top of 229% bookings growth in Q2 of 2020, meaning that Roblox's Q2 bookings have exploded from only $150 million in 2019 to $665.5 million today.

And even though management says they are reinvesting as much as they can to grow the business, Roblox has started to generate tons of cash. In Q2, operating cash flow came in at $191.2 million, and was $719.9 million over the last 12 months.

I think that Roblox can build a long runway of growth for itself by continually improving its developer tools (and therefore the quality of games developers can make) and could feasibly reach its goal of one billion users. That means the company could be generating much more than $719.9 million in operating cash flow five or 10 years from now, which would be good news for anyone invested in the stock.

TSMC has a relatively simple investment thesis, which is that it manufactures a growing percentage of the world's semiconductors. It makes computer chips for large customers like Apple, NVIDIA, and Qualcomm, and has minimal competition except for Samsung, Intel, and a few others, which have lagged behind it from a technological standpoint over the last few years.