When it comes to finding solid companies with stellar stock growth potential, one industry that tends to fly under the radar is insurance. But investors should know that Warren Buffett considers the insurance industry Berkshire Hathaway's "most important sector."

What Buffett loves about insurance companies is the business structure, which sees insurance companies collect money, known as float, in advance of claims that are paid out down the road. This float is then put to work in investments, and is one reason why Berkshire has been able to grow as big as it is. In the insurance sector, you can find established players that have been around for 50 years or more. These stocks can provide steady returns and solid dividend yields. 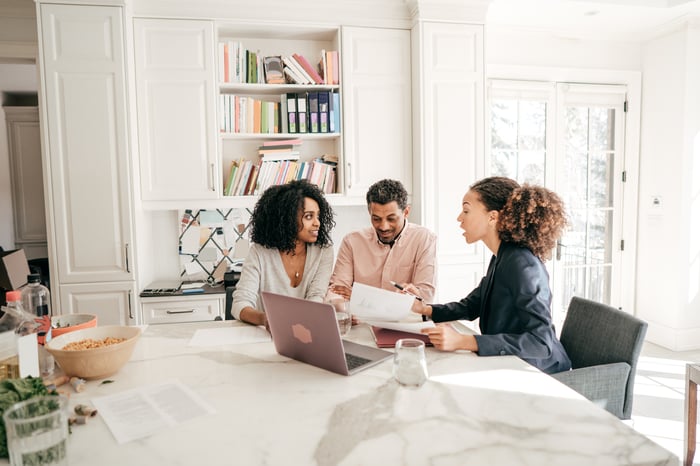 But insurance stocks aren't just limited to these slow and steady companies. Goosehead Insurance (NASDAQ:GSHD), Palomar Holdings (NASDAQ:PLMR), and Kinsale Capital Group (NASDAQ:KNSL) are all insurance stocks that have been publicly traded for five years or less that also have strong growth prospects. These companies all focus on different aspects of insurance, but they have in common an ability to serve markets while generating high profit margins that should help them expand and grow further.

Let's take a closer look at these three under-the-radar growth stocks with the potential for long-term performance.

Goosehead Insurance is an insurance broker, which simply means it focuses on selling insurance policies for other companies. The company sells insurance at a corporate level, but also provides a franchise channel, where it provides support services to agents. These support services include things like quality control services for new policies, accounting services, handling client inquiries, and renewals.

One of the best aspects of the franchise model is that as it grows, Goosehead's profit margins should improve too. That's because Goosehead makes higher margins when its franchisees renew contracts. This franchise channel has grown rapidly, with total franchises up 59% from one year ago to 1,801 in total.

Long-term growth has been stellar for the company. Since 2016, Goosehead's revenue has grown at a 38% compound annual growth rate (CAGR), while net income has grown at a nearly 10% CAGR. This strong growth has continued so far this year, with revenue up 37.8% in the first half of this year to $69.4 million. This comes as total written premiums grew 47% to $718 million.

One thing to keep an eye on is the bottom line. So far this year, income from operations was $3 million, down 62% from last year. This decline was due to the rapid expansion in its franchise channel, which increased onboarding expenses, causing bottom-line growth to lag.

However, this franchise growth should provide consistent long-term revenue for the broker. That's because Goosehead earns higher profit margins from renewals via commissions and royalty fees, which are more predictable revenue streams and can give the business stability. Given how the company has scaled up thus far, Goosehead looks like it is setting up to be a stellar long-term holding.

Palomar Holding is an insurer that focuses on writing unique policies for underserved regions of the United States. Palomar targets underserved areas while maintaining high profit margins by using modeling techniques to analyze data at a ZIP code level. This model, along with its built-up expertise underwriting policies, allows the insurer to underwrite complex risks in markets that have previously been unserved.

Palomar provides a variety of types of coverage, but its largest segment is residential earthquake coverage, making up 32.6% of its gross written premiums in 2021. Its next-largest revenue generator is specialty homeowners coverage for wind exposure from hurricanes, and it is targeted to specific counties in states like Louisiana, Mississippi, and the Carolinas, which makes up another 14.8% of its business. It also has commercial coverages related to earthquakes and other risks, accounting for another 25% of its business.

Palomar has provided coverage to these underserved markets while ensuring profitability metrics are solid. One measure of profitability in the insurance industry is combined ratio, where a ratio below 100% is a sign the insurer is underwriting profitable policies. The further under 100% an insurer is, the higher its profit margins. During the first six months of the year, Palomar posted a stellar combined ratio of 68.7%, up slightly from its 66.7% combined ratio last year. For comparison, other large-scale property and casualty insurers that cover a wider range of policies, such as Travelers and Chubb, have combined ratios of 95.9% and 88.6% this year.

Since 2016, Palomar's total premiums earned has grown at a 40.2% CAGR, while net income has grown at a 13% CAGR. Growth this year is solid as well, with net earned premiums up 36.6% compared to the first six months last year. Not only that, but net income increased 21.8% from last year to $29 million. Palomar's focus on underserved markets positions it well to post solid profit margins and continue its steady growth trajectory.

Kinsale Capital Group is a property and casualty insurer similar to Palomar, but it focuses exclusively on excess and surplus lines of coverage in the United States. Excess and surplus insurance is a type of specialty insurance that covers things that a standard insurer doesn't cover. Kinsale focuses on underwriting coverage for hard-to-place small business risks and personal risks, and it has a number of divisions to underwrite coverage for small businesses, construction, product liability, environmental, and energy, just to name a few areas.

Since 2014, Kinsale's net premiums earned has grown at a 39.5% CAGR, while net income has grown at a 40.9% CAGR. This year the insurer's solid growth has continued, with net written premiums of $312 million in the first half of the year, up 38.3% from last year. The insurer has benefited from favorable conditions in the excess and surplus insurance market, with rate increases and broker submissions both coming in strong so far this year.

Like the others mentioned above, Kinsale has managed to achieve stellar underwriting results, benefiting its profit margins and bottom line. In the first half of this year, its combined ratio of 79.5% is an improvement from last year's 83.9% ratio. Kinsale's focus on hard-to-place insurance has paid off, and this built-up expertise should continue to drive future growth.