Lovesac, PubMatic, and Baozun all trade at market caps below $2 billion, but that could change soon.

Big things sometimes come in small packages. There are plenty of stocks currently commanding market caps below $2 billion. Most of them will stay that way, but a few winners will graduate to become mid-cap stocks.

Lovesac (LOVE 0.78%), PubMatic (PUBM 0.53%), and Baozun (BZUN -0.61%) are some of the promising investments that just happen to be small-cap stocks right now. Let's go over why they could be moving higher in the next year or two. 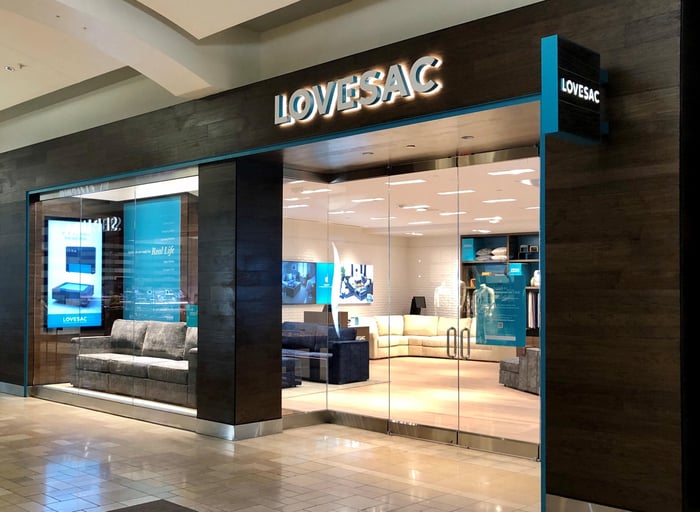 You wouldn't think that selling premium beanbag chairs and even more expensive modular sectionals is a sustainable growth business. I hear you, but check out sales growth over the last four fiscal years at Lovesac.

Now, keep in mind that the last year there was the pandemic. It was the fiscal year that concluded at the end of January. We spent a lot of time at home, so it's not a shock that we were loading up on home furnishings that would make us feel more comfortable. Naturally growth would take a breather this year because --

What's that? Net sales have soared 59% through the first half of this year on explosive bottom line growth? We're looking at a fifth straight fiscal year of top-line growth of 33% or better. It's hard to dismiss Lovesac's product as a passing craze. If you do still think that, check back next week. Lovesac has scheduled a media event on Monday to show off a brand new product. There's too much heat here for a resilient growth stock commanding a market cap of just $1 billion.

Growth investors are finding fertile soil in the programmatic digital advertising market. PubMatic is one of the smaller -- but thankfully cheaper -- plays in this booming niche. PubMatic operates a sell-side platform, working with publishers and app developers to monetize their content through ads.

PubMatic is working on its sixth consecutive year of profitability. Revenue growth in its first three quarters since going public last December has clocked in at 64%, 54%, and 88% respectively. Despite its healthy growth and consistently positive earnings it's trading for just six times revenue. The two larger publicly traded digital ad platform operators are commanding revenue multiples to enterprise value of 14 and 33.

The industry will be challenged by the inevitable demise of browser cookies, but PubMatic will find ways to continue delivering well-targeted marketing missives. In the meantime, the company is a cash-rich and debt-free rising star with a modest $1.4 billion market cap.

Let's close things out by taking a trip to China, where growth stocks have corrected sharply. Baozun was a mid-cap stock earlier this year, but after shedding roughly two-thirds of its peak value it's clocking in with a $1.6 billion market cap.

Baozun helps global brands trying to gain an e-commerce foothold in China. There are now 266 major brands on its platform, including 15 of the 50 most valuable global brands. We've seen China's regulatory agencies crack down on everything from for-profit education to online gaming restrictions for minors. E-commerce isn't going to be very high on that list of targeted industries.

After at least 26 consecutive quarters of double-digit revenue growth Baozun did see its year-over-year gain decelerate to a 7% increase in its latest quarter. It should bounce back. Baozun is now trading for 20 times this year's projected earnings and less than 15 times next year's target. It's been buying back its stock so the per-share math should get even kinder in future quarters.

Why Lovesac Stock Was Falling Today