In a week when private space tourism competitor Blue Origin stole the spotlight, Virgin Galactic (SPCE -6.39%) took over the headlines Friday, but for the wrong reason. With news that the company is again pushing back its initial commercial flights, investors are bailing from the stock. As of 10:25 a.m. EDT, Virgin Galactic shares are down more than 13%, after being as much as 16% lower earlier.

Blue Origin launched its second flight with civilians aboard this week, and gained much publicity with Star Trek's William Shatner among them. Shatner, who famously played Captain Kirk in the franchise, at 90 years old became the oldest person to get to zero gravity, as the company's ship reached the edge of space. The flight also contained paying customers. So it stings even more that Virgin Galactic announced last night that it will need to delay its first commercial launch until the fourth quarter of 2022. 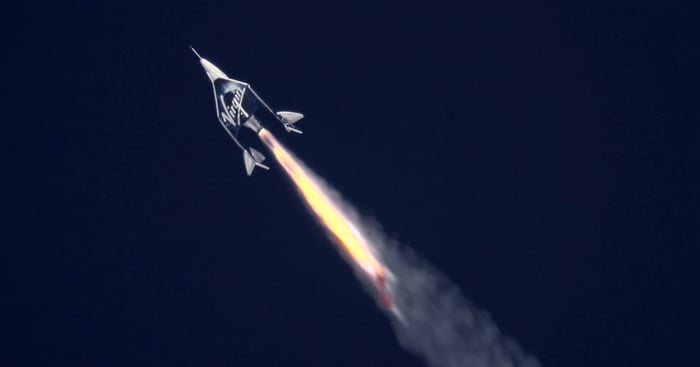 Virgin Galactic had previously said its Unity 23 mission, which was to be its first commercial flight, being launched for the Italian Air Force, would proceed this month. The company was then planning an "enhancement" period to perform work on its spaceship and carrier vehicle. But the company now says it will need to perform that work prior to the flight, delaying those flight plans until late next year.

Virgin Galactic said that upon performing routine laboratory tests and analyses, the company "flagged a possible reduction in the strength margins of certain materials used to modify specific joints, and this requires further physical inspection." The previously planned enhancement period was intended to increase safety and reliability, so the company decided to perform that work prior to the Unity 23 launch.

Investors are disappointed in the delay, especially after seeing the Blue Origin flight this week. But long-term investors comfortable investing in this speculative growth sector should probably consider this a buying opportunity.  Any investment should have a time horizon of years, if not decades. A 10-month delay in itself won't change the bigger picture for this company.