So it's easy to see which way the smoke is blowing for the cannabis industry -- but that doesn't mean all cannabis companies are good investments.

As is common with any new industry, there's a lot of upheaval in the cannabis space, with changing regulations, a lot of new companies, and evolving consumer tastes. That means there's plenty of risk, but to me, Cresco Labs (OTC:CRLBF), Trulieve Cannabis (OTC:TCNNF) and Innovative Industrial Properties (NYSE:IIPR) appear to be three of the best long-term bets. 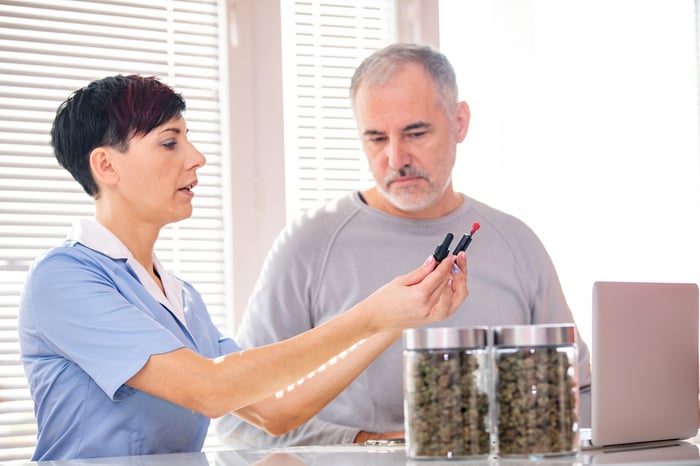 Cresco is sticking with its business plan

Multi-state operator Cresco Labs has focused on limited-license states because those markets are more profitable and feature less competition. It has nine retail outlets in Florida and 10 in Illinois. It recently purchased, for $90 million, three dispensaries in Pennsylvania, which will give it seven total there. All three are limited-license states.

The company has 37 retail outlets currently, 47 retail licenses, and a large wholesale business that has placed its roughly 350 cannabis products in more than 1,000 dispensaries across the United States.

Many cannabis companies' share prices have been sliding lately, Cresco's among them. The ETFMG Alternative Harvest ETF, which tracks the industry, is 56% off a late-February high. Cresco's shares are down 50% over that period. Considering the company's strong financials, though, I think this sell-off presents a good buying opportunity.

Trulieve's stock is down by more than 13% over the past year. One unusual issue that has added to the downward pressure on the MSO's share price was that J.T. Burnette, the husband of Trulieve CEO Kim Rivers, was found guilty of extortion, honest services mail fraud, violating the Travel Act, and lying to the FBI in a recent public corruption trial. These events affected the stock although Burnette had no direct business connection to Trulieve.

However, if you look at the company's financials, there are plenty of reasons to think now is a good time to buy in. In the second quarter, Trulieve reported six-month revenue of $408.9 million, up 89% year over year, and net income of $71 million, up 67% over the same period in 2020. Trulieve also just closed on its deal to buy Harvest Health and Recreation, making it one of the biggest MSOs in the industry. Trulieve reported $215.1 million in revenue in the second quarter; combined with Harvest's revenue of $102.5 million, the total of $317.6 million in sales for the quarter would make it No. 1 among public cannabis companies. Trulieve now operates 126 dispensaries, including 94 in Florida alone, thanks to its Harvest Health deal.

Innovative Industrial Properties is essential to the industry

Innovative Industrial Properties, a real estate investment trust (REIT) that buys the properties of cannabis companies and then leases those properties back to the sellers, has avoided the general malaise affecting the cannabis sector of late.

That's because the REIT's long-term triple-net leases -- which have an average of 16.7 years remaining -- make it less susceptible to short-term headwinds. As of Oct. 1, the company said it owned 75 properties, fully leased, located across 19 states with 7.3 million rentable square feet, including properties under development or being refurbished. Innovative Industrial's stock is up more than 30% this year.

Through the first six months of 2021, Innovative Industrial Properties had adjusted funds from operations (AFFO) of $81.4 million, more than double its AFFO of $38.8 million over the same period last year. Net income was $54.6 million, up 222% year over year. AFFO per share was $3.11 compared to $2.31 in the prior-year period.

Innovative Industrial Properties also offers a nice dividend, and has raised its payouts for six consecutive quarters, including a 7% bump from $1.40 to $1.50 a share this quarter. Since it began distributing dividends in 2017, it has raised its quarterly payouts by 900%.

Perhaps the biggest fear with Innovative Industrial Properties will come to fruition if cannabis is ever decriminalized at the federal level. That would open up more sources of funding for cannabis companies and limit the company's growth. Federal legalization doesn't seem to be on the horizon any time soon, though and when it does happen, there will still be companies that choose the REIT's lease-back option.

Plenty of growth baked in with these stocks

I like all three stocks' long-term potential. Cresco and Trulieve have the size and scope to survive industry shakeups, and with their share prices down, I believe this is a good time to buy either one.

Based on its lower price-to-sales ratio, Cresco appears to be the better buy of the two, particularly because its strong wholesale sales give it an edge. Innovative Industrial Properties is a better stock for the risk-averse, though at its current price, it's not the bargain the other two are.