Despite their stock prices taking a breather, these companies' operations seem to be unstoppable.

With high expectations baked into the share price of many promising companies, providing anything less than perfection can lead to a drop in share price. This appears to be the case for a trio of companies that have seen their share price tumble recently, despite exhibiting fundamentally sound growth metrics.

These three companies have promising growth that seems unstoppable, and each trades for less than $100. 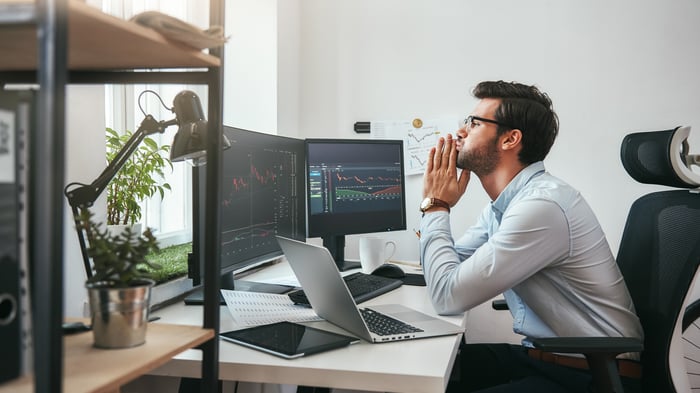 Operating in South Korea, Coupang (CPNG 2.49%) has plans to become that country's version of Amazon. After more than tripling revenue over the past two years, the company has quickly become one of the fastest-growing e-commerce companies in the world.

However, since its IPO in March, Coupang has seen its share price tumble by more than 40% due to concerns over its working conditions and a logistics center warehouse fire in June. As unfortunate as the fire was, the company and CEO Bom Kim are determined to come back stronger. It says it has added 600 "safety employees" and spent $200 million in safety initiatives since the start of 2020.

Ultimately, Coupang will have to continue proving that it places safety over sales, but its four-star (out of five) rating and 88% employee approval rate for Kim via anonymous ratings on Glassdoor, indicate a healthy culture.

Operationally, Coupang has looked unstoppable, reporting 15 consecutive quarters of more than 50% year-over-year constant-currency revenue growth. Despite growing revenue to a run rate of over $18 billion annually, management expects the South Korean e-commerce market to be worth $530 billion by 2024, highlighting the massive growth runway remaining for the company.

Currently sporting a market capitalization of $46 billion, Coupang's remaining market opportunity gives it plenty of room to run for the foreseeable future, giving investors with a long-term outlook reason much optimism.

Having declined roughly 40% in the last six months, Pinterest (PINS 1.43%) is a classic example of a fundamentally sound company whose stock is getting crushed due to less-than-perfect metrics. Due to the company's 5% decline in monthly active users (MAUs) in the U.S. in the most recent quarter, investors watched Pinterest drop over 15% after earnings in July. While this decline in MAUs is concerning, the company grew mobile users in the U.S., who are typically more engaged with the app than their desktop-based counterparts.

Thanks to this growing engagement, Pinterest grew revenue by 125% YOY for the second quarter and average revenue per user (ARPU) by 89% over the same time frame. If ARPU growth continues to expand at a rate well above its expenses' increase, profitability should begin to multiply exponentially over the long term. Speaking on the further monetization of engagement, CFO Todd Morgenfeld said during the conferenee call, "While we're still early in the journey to fully monetize our shopping engagement, we believe that we have the right sales coverage model, and we're delivering conversions to advertisers who are seeking sales on the platform."

In fact, the company is rapidly approaching a tipping point in reaching consistent profitability, recording $161 million in net income over the trailing 12 months.

Before 2021, The Trade Desk (TTD 3.01%) stock looked unstoppable, rising over 3,000% in four years fueled by a nearly 300% increase in revenue over the same time. The ad-buying platform quickly grew its market capitalization but has seen its stock price remain stagnant since the beginning of 2021 due to slowing growth and higher spending.

However, reporting Q2 earnings in August, The Trade Desk reported reaccelerated revenue growth and saw sales spike by 101% YOY, highlighting that its focus on connected television (CTV) is quickly gaining traction. Representing the company's fastest-growing channel, founder and CEO Jeff Green touched on the growth of the segment during the Q2 earnings call, saying that "the number of brands spending more than $1 million in CTV on our platform has already more than doubled year over year."

Furthermore, the company has grown non-North American revenue from 6.5% of its total to 13% since 2015, demonstrating its desire and ability to become a global ad platform. With two-thirds of the world's ad spend coming from outside of North America, The Trade Desk has a massive international growth runway remaining ahead of it.

The Trade Desk is looking unstoppable operationally, making the stock's underwhelming performance during 2021 look like a potential entry point for investors.

Why The Trade Desk, Meta Platforms, Amazon, and Other Digital Advertising Stocks Were Falling Today

Why The Trade Desk, Roku, and Other Digital Advertising Stocks Got Crushed Today

Great News Investors! It's Not Too Late to Invest in Streaming