The iconic food maker is going through an unprecedented pandemic cycle.

Your grandparents ate it, your grandchildren will too -- but coming down from a pandemic surge in sales, Campbell Soup (CPB -2.50%), has gotten a little too cold for investors. Campbell, founded in 1869,  is a victim of an unprecedented pandemic cycle. But if investors stay patient, they might still have the chance to scoop up some delicious returns.

Consumers loaded their cupboards with soup during amid lockdowns, and now that more of them are vaccinated, they're buying fewer Campbell products. The company recently reported an 11% decline in sales for the fourth quarter and projected essentially no growth for its fiscal 2022 performance. Investors didn't like this news and they seem to viewing the can as only half full.

But despite this sharp pullback in sales, consumers are still buying more of Campbell's brands than they did before the pandemic hit. 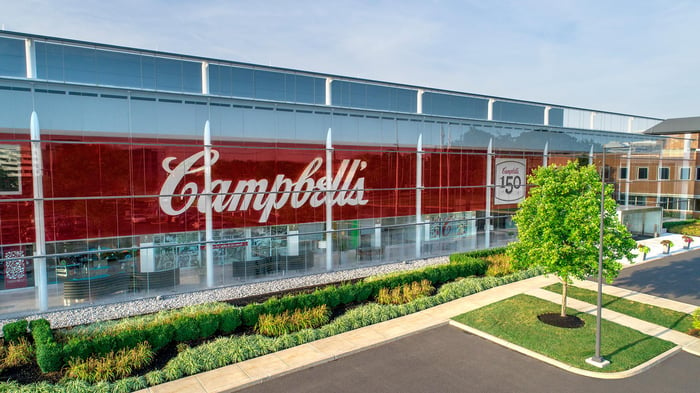 Campbell's fourth-quarter net sales are up 5% over the same period in 2019, before the pandemic hit, even though they are down from the fourth quarter of 2020.

The good news is that the crisis put Campbell into more households, expanding its consumer base for the future. On a fourth-quarter earnings call, Campbell's CEO Mark Clouse said "ready to serve end market consumption" grew 21% between the 2019 and 2021 fourth quarters. It was led by Chunky, Slow Kettle, and Well Yes! soups, and he plans to retain these customers.

Campbell makes the soup that made Andy Warhol famous, so it's easy to forget that it's not just about the soup. If you've ever said, "Uh-oh, Spaghettio's," you're talking Campbell. Its products include mainstays such as V8 juices, Pepperidge Farms snacks, Pace picante sauces, Prego pasta sauces and Archway cookies, to name a few. In 2018, Campbell acquired one of the world's largest makers of salty snacks, Snyder's-Lance.

Campbell has plenty of competition, but it has fended off other food companies in its categories for more than 150 years. It's difficult to walk through a grocery store and not encounter one of it's products. It is considered a wide-moat stock because grocers are reluctant to give its shelve space to lesser-known brands.

The companies that will succeed the most in the quarters to come are the ones that can best overcome pandemic bottlenecks and rising inflation. Already, supply disruptions, labor woes and commodity shortages have pushed inflation above 5%, and there's likely more to come.

These same risks apply to Campbell, but the company boasts a stalwart logistics chain able to withstand these issues better than many other companies that haven't been around since the 1800s.

The company touts plans to raise prices and enhance supply chain productivity. It also expects its multiyear cost-savings program to deliver $850 million in savings by the end of its 2022 fiscal year -- including synergies achieved from its Snyder's-Lance acquisition.

With nearly $8.5 billion in annual sales, this is a significant savings, demonstrating that Campbell benefits from huge economies of scale to help meet the challenges ahead.

Campbell isn't performing badly -- there just isn't as much fear-based consumer consumption as there was last year to spike its sales. Additionally, its guidance for the challenging quarters ahead may not be as dire as investors currently perceive.

The company has transparently acknowledged its difficulties and laid out plausible strategies to deal with them. Meanwhile, it's paying a roughly 3.5% dividend yield.

The stock, now trading slightly above its low, could prove a solid bet for investors patient enough to weather the rest of the pandemic cycle.

These Stalwart Stocks Stayed Strong in a Sagging Market

Pfizer and AT&T Get Answer on M&A Bids, While Campbell's Cold Soup Disappoints