Please ensure Javascript is enabled for purposes of website accessibility
Log In Help Join The Motley Fool
Free Article
Join Nearly 1 Million Premium Members And Get More In-Depth Stock Guidance and Research
By Will Healy – Oct 19, 2021 at 7:10AM

Investors may want to follow the ARK Invest founder's lead when it comes to these tech stocks.

In the investment world, Cathie Wood has garnered increasing attention for her successes in recent years. Her ARK Innovation ETF (ARKK 1.75%) boasts a 1-year return of 22% and an average annualized return of 40% over the last five years.

Wood has accomplished this by picking market-leading companies that put an emphasis on innovation in their respective industries. Holdings such as Nano Dimension (NNDM -2.97%), Teladoc Health (TDOC 4.78%), and Twitter (TWTR) have the potential to boost those returns further. Let's find out a bit more about these three companies. 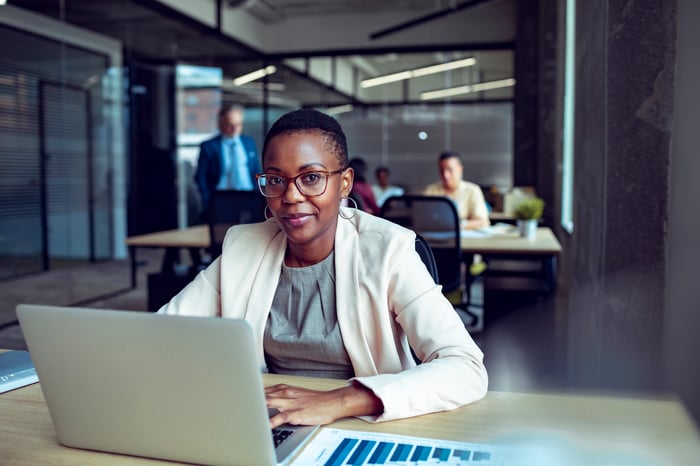 Nano Dimension stands out in the 3D printing world for its unique capabilities -- its printers can make circuit boards. Previously, the only option for a company that needed custom circuit boards was to contract with a manufacturer such as Jabil and purchase them in sufficient quantities to make that cost-effective.

Its major risk is sales. It only generated $1.6 million in revenue in the first half of 2021. Considering its printers sell for between $50,000 and $100,000, that top-line figure shows its unit sales are minuscule, though revenue did rise by 64% from the first six months of 2020. Also, with around $30 million in operating expenses during that period, profitability is a long way off.

However, the company holds over $1.4 billion in financial reserves, which should allow it to survive for a long time and invest in product improvements as it works its way toward profitability. A team of 130 scientists and engineers also supports this product.

Fundamentally, though, investing in Nano Dimension stock is a bet that the company can find the market for DragonFly. About 2% of Wood's ARK Autonomous Tech & Robotics ETF (ARKQ 0.99%) consists of Nano Dimension stock, and the fund has added shares in recent weeks. If future quarters' results validate Wood's optimism about the company, this tech stock could bring shareholders a substantial payoff.

Teladoc is the leader in telehealth, connecting patients to healthcare services via video calls. Although such a service would seem to have a narrow competitive moat at first glance, Teladoc has made investments such as its acquisitions of Livongo Health and Advance Medical that give it expertise and enhanced patient monitoring options that competitors may struggle to match.

Still, concerns about the durability of its competitive advantage have weighed on the stock. Investors sold off Teladoc earlier this year on word that Amazon was entering the telehealth market. The stock has fallen by around 55% since February.

However, the company reported $957 million in revenue for the first half of 2021, a 127% increase year over year, so that price drop may seem strange. On the other hand, its operating expenses grew by almost 150% during that period, taking its losses to $333 million, well above the $55 million it lost in the first half of 2020.

Nonetheless, the company projects at least $2 billion in revenue for 2021, up 84% from its 2020 revenue of $1.1 billion. Wood has also made it the second-largest holding in the ARK Innovation ETF, comprising more than 6% of that portfolio. It also makes up 5% of the ARK Next Generation Internet ETF (ARKW 1.73%).

Wood has continued to add Teladoc shares to multiple ARK funds. This could point to a belief that investors have overreacted to the Amazon threat. Assuming the company can continue its rapid revenue growth, it could validate Wood's bet on this battered stock.

Twitter is another large holding of Wood's that may capture investor attention, making up about 5.5% of the ARK Next Generation ETF. It may have drawn this interest due to the competitive advantage it holds for media figures and others trying to reach broad audiences with their messages. Also, its limits on the length of posts bring a simplicity one will not find on Facebook.

Wood increased the size of her Twitter position in September after the company added an option that enables users to tip "influencers" and content creators on the platform in Bitcoin. This should broaden Twitter's appeal; in fact, at least one analyst considers Twitter the ultimate cryptocurrency stock to buy now.

Thanks in part to that appeal, Twitter brought in more than $2.2 billion in revenue in the first half of 2021 -- up 49% year over year. This revenue increase, along with lower interest costs and $56 million in income from equity investments, led to a profit of $134 million, an improvement over the $1.4 billion loss reported over the same period of 2020.

This does not mean that Twitter will completely escape the effect of the economic reopening. Management expects no growth in the number of daily active users in the second half of 2021. The company also predicts its costs and expenses will grow by 30%.

Moreover, though it forecasts that revenue growth will exceed that rate, management offered no revenue or earnings forecasts beyond Q3. Furthermore, with the company predicting a possible operating loss, sustained profitability remains an issue.

Still, the stock price has risen by more than 35% over the last year, and Twitter's price-to-sales ratio of 12 is less than Pinterest's P/S ratio of 15 or Snap's P/S ratio of 35. Such dynamics could set up Twitter for gains should conditions cause investors to conclude that its valuation ought to be more in line with those of its peers.

Does the Potential of Nano Dimension Stock Outweigh Its Risks?
409%