On Nov. 8, investors will learn if the 3D printing company crushed Wall Street's revenue and earnings expectations in the third quarter, as it did in the prior quarter.

3D Systems (DDD -5.91%) is slated to report its third-quarter 2021 results after the market close on Monday, Nov. 8. An analyst conference call is scheduled for 8:30 a.m. EST the following day.

Investors in the 3D printing company will probably be approaching the report with optimism. Last quarter, the company crushed Wall Street's consensus estimates for both revenue and earnings.

Investors should be prepared for volatility. 3D Systems stock often makes big moves up or down following the company's release of quarterly results. The volatility is partly due to the stock having a relatively substantial short interest. (Short-sellers are those who bet that a stock will decline, and when good news comes out, they're under pressure to buy the stock to cover their short bets.)

In 2021, shares are up a whopping 156% through Oct. 18. That makes the stock the best performer among the diversified 3D printing companies that have traded for this period. Stratasys stock is up 32%, and is also beating the S&P 500 index, which has returned 21% so far this year. On the other hand, shares of Materialise and Desktop Metal are struggling, as they're down 62% and 60%, respectively.

Here's what to watch in 3D Systems' Q3 report. 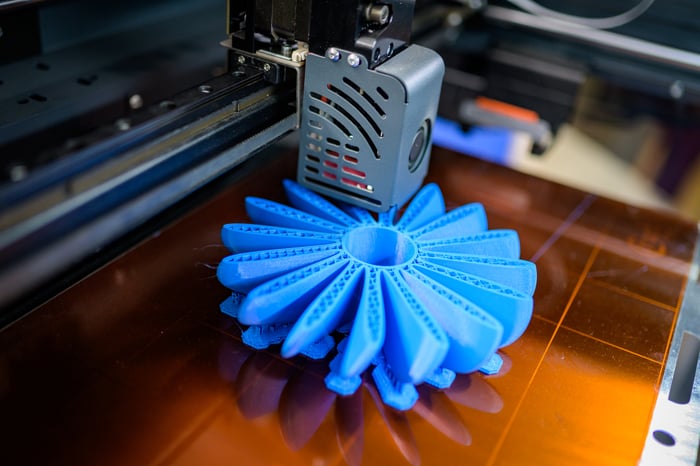 Below are the company's results from the year-ago quarter and Wall Street's consensus estimates to use as benchmarks.

Wall Street has modest expectations for revenue growth. Given 3D Systems stock's strong run-up this year, the company probably needs to exceed the consensus estimate by a comfortable margin to satisfy investors.

For context, in the second quarter, 3D Systems' revenue soared 44% year over year (and 59% excluding the impact of divestitures) to $162.6 million. This result flew by the 27% growth Wall Street had been expecting. Growth was driven by the healthcare segment, whose revenue rocketed 69% year over year. The industrial segment, which was hit hard by the pandemic, rebounded solidly with sales rising 25% (and 50% excluding divestitures).

In Q2, loss per share according to generally accepted accounting principles (GAAP) narrowed 76% to $0.08. Adjusted for one-time items, the company posted a profit of $0.12 per share, compared to a loss of $0.13 per share in the year-ago period. That result was more than double the $0.05 per share analyst consensus estimate.

On the earnings call, investors can expect management to comment on the pending acquisition of Oqton. The Belgium-based software company is a "the leader in the creation of a new breed of intelligent, cloud-based Manufacturing Operating System (MOS) platform," according to the press release. 3D Systems believes Oqton will help it drive adoption of 3D printing for manufacturing applications.

3D Systems announced this $180 million deal, comprising cash and stock, in early September, and expects it to close in the fourth quarter of this year.

The stock's reaction to the upcoming release will probably hinge more on management's outlook than on third-quarter results. Though it remains to be seen whether management will issue specific or broad guidance.

For Q4, analysts are currently modeling for revenue to decline 18% year over year to $142.3 million. They also expect adjusted EPS of $0.07, down from $0.09 per share in the year-ago period.