Nerdy (NRDY 0.75%), a tutoring marketplace start-up, agreed to go public by merging with the special purpose acquisition company (SPAC) TPG Pace Tech Opportunities (PACE) back in January. The merger closed on Sept. 20, and the new shares started trading on Sept. 21.

Nerdy's stock price rose 3% and closed at $11.56 on the first day, then continued climbing to an intra-day high of $13.49 the following day. However, the stock quickly lost its luster and only trades at about $9 per share as of this writing.

Could Nerdy's stock still be worth buying after its disappointing public debut? 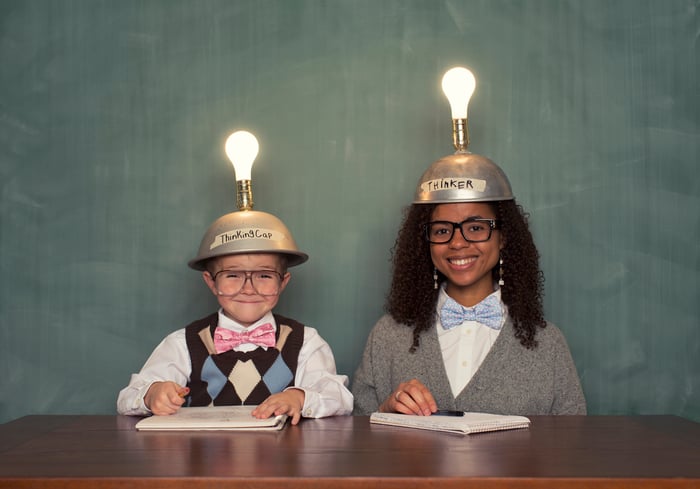 What does Nerdy do?

Nerdy doesn't operate a dedicated online education platform like 2U (TWOU 6.03%), Coursera (COUR 2.73%), or Udemy. Instead, it operates a freelance marketplace -- more comparable to Fiverr (FVRR -1.47%) or Upwork (UPWK 1.14%) -- that connects private tutors to students with live lessons.

How fast is Nerdy growing?

Nerdy's net loss still narrowed year over year, from $12.1 million to $6.1 million, as it booked $8.4 million in gains from extinguishing its debt. Excluding those gains, its net loss would have widened to $14.5 million.

Over the long term, Nerdy expects its revenue to rise 43% in 2022 and grow 35% to $267 million in 2023. It expects its gross margin to continue expanding to 72% in 2023, and to achieve profitability by both GAAP and adjusted EBITDA measures for the first time that year.

Is Nerdy cheap relative to its peers?

Nerdy was valued at $1.7 billion, or 12 times this year's sales, at the time of its IPO. It's now worth about $1.5 billion, or eleven times that estimate.

By comparison, Fiverr and Upwork trade at 25 and 15 times this year's sales, respectively. Analysts expect Fiverr's revenue to rise 52% this year, and for Upwork's revenue to increase 32%.

Nerdy seems more reasonably valued than both gig economy companies, and its tutoring marketplace focuses on a narrower niche market. By avoiding the market for certified college courses and degrees, Nerdy also won't be shackled to big university partnerships like 2U and Coursera.

Is Nerdy's stock worth buying?

If you believe Nerdy will comfortably hit its growth targets for 2023, its stock is worth buying at these levels. However, it could still take a few more quarters to see if those projections are realistic or just SPAC-related hype.

I wouldn't buy Nerdy yet, since the stock isn't particularly cheap and it's unclear if it can maintain its momentum after the pandemic passes. It also faces stiff competition in the online tutoring market from diversified education companies like Chegg and The Princeton Review -- and it needs to narrow its losses before I believe it can actually turn a profit by 2023.

Is It Too Late to Buy Nerdy Stock?