The FDA approval of nasal spray Tirvaya didn't include data needed for the company to receive the second tranche in its credit facility.

Shares of Oyster Point Pharma (OYST) were sinking 9.2% as of 11:05 a.m. EDT on Tuesday. The decline came only a day after the company won U.S. Food and Drug Administration (FDA) approval for its Tirvaya nasal spray in treating dry-eye disease.

That FDA decision was definitely good news for Oyster Point. So why did the biotech stock drop today?

The approved label for Tirvaya didn't include eye dryness-score data from the company's clinical studies evaluating the nasal spray. This data was one of the conditions for Oyster Point to receive a second $50 million tranche from its credit facility with OrbiMed. 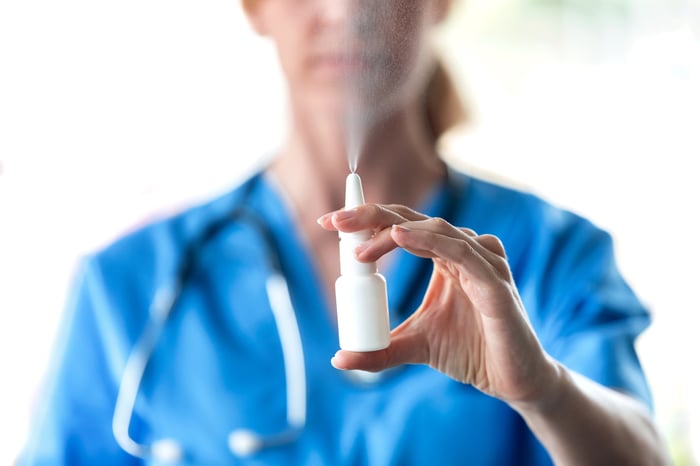 Oyster Point had cash and cash equivalents of around $184 million as of Sept. 30, 2021. Its expenses will increase with the launch of Tirvaya.

The main concern for investors is that Oyster Point could have to raise money another way if it doesn't receive the $50 million tranche from OrbiMed. That usually means issuing new shares, which causes dilution in the value of existing shares.

Also, Oyster Point hopes to receive a third tranche of $30 million from OrbiMed if it achieves $40 million in net recurring revenue from Tyrvaya before June 30, 2023. If the company doesn't receive the second tranche, this third tranche will be off the table.

Oyster Point stated in a filing to the U.S. Securities and Exchange Commission (SEC) that it's in discussions with OrbiMed about getting a waiver so that it can receive the second tranche. If OrbiMed grants this waiver, Oyster Point would be eligible to later receive the third tranche if it meets the sales target for Tyrvaya.