Strip-mall landlord Whitestone REIT (NYSE:WSR) has a lot going for it. But there's one big problem that investors need to think about -- it's so big, in fact, that even if the stock were to fall in a market crash, most investors would still be better off picking one of its larger peers. Here's why some investors might be tempted to buy Whitestone REIT, and why most shouldn't.

Whitestone is a real estate investment trust that owns 60 strip malls, containing retailers and other tenants focused on providing basic products and services to local communities. It operates largely in Texas and Arizona, two fast-growing states, with eyes on a few other Sunbelt states for expansion. In most of the markets it where it owns properties, average incomes are generally above the U.S. mean. Occupancy is about 90% right now, which isn't out of line with peers.

So far this sounds pretty appealing. The REIT also has an interesting value-driven approach to investing: It tries to buy strip malls that are mismanaged, overleveraged, or in bankruptcy-receivership. It then works to fix whatever is wrong, which could require capital investment to redevelop a property or simply reducing onerous debt levels. The main goal is to make a property fit well within its surrounding market.

And this is where things start to get a little hazy.

One of the core principles of owning and operating a strip mall is that you want the property filled with stores that people visit frequently -- things like hair salons, restaurants, and dry cleaners. And Whitestone has a lot of stores that would fall into this everyday-use category. However, there's one type of retailer that is in short supply: grocery stores. Only about half of the REIT's properties have a grocery component.

Grocery stores are considered one of the most important tenants for strip malls because they bring consumers back on a regular, usually weekly, basis. The logic is that consumers will make trips to other stores in the center while grocery shopping. But it seems like this key strip-mall category is low in the priority mix for Whitestone, appearing only once in the company's second-quarter earnings presentation, and then only in a list of its top sectors. Instead, the REIT practices what management calls a "consumer-driven" approach. It suggests that this means a focus on smaller stores. 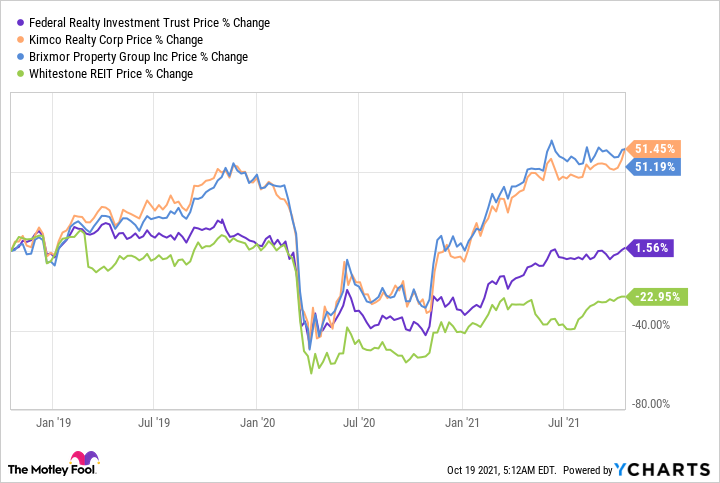 A few comparisons with some other REITs is instructive. Industry giant Kimco (NYSE:KIM) had grocery stores in 79% of its nearly 400 properties at the end of the second quarter. It mentions grocery multiple times, and actually dedicated an entire page in its second-quarter presentation to note that it wants to increase that number to 85%. In fact, it puts grocery stores into the description of its business: "One of North America's largest publicly traded owners and operators of open-air, grocery-anchored shopping centers and mixed-use assets." Kimco has since consummated the acquisition of Weingarten Realty, which increased its portfolio to about 560 properties, but the grocery exposure should end up being roughly the same.

Federal Realty (NYSE:FRT), with just 100 or so extremely well-located properties in and around major U.S. cities, highlights that it has grocery stores in about 75% of its centers. And Brixmor (NYSE:BRX), with a portfolio of almost 400 properties, has roughly 70% of its properties anchored by a grocery store. This emphasis on grocers by some of the biggest and best-known names in the strip-mall business makes Whitestone look like something of an outlier.

Contrarian investors might like the idea of owning a strip-mall REIT that takes a different approach, especially its goal of buying fixer-uppers. And certainly if everyone is looking for REITs that own properties anchored by grocery stores, then Whitestone is limiting its competition by looking at locations without major grocery components. However, most investors, and particularly those looking for consistent dividends, probably will be better off sticking with strip-mall REITs that follow industry-leading practices. (Notably, Whitestone cut its dividend in 2019 and in 2020.) The best practice is clearly a focus on grocery stores, given that industry bellwethers such as Kimco and Federal Realty pay so much attention to this type of tenant.

So even if Whitestone's stock falls in the next bear market, it probably still won't be as attractive as its peers for most investors.