High-yield Enbridge operates in the carbon-heavy midstream space. Is it safe to own this dividend stock, or is the yield a sign of trouble?

Canadian midstream giant Enbridge (ENB 0.64%) has a 6.1% dividend yield, which is more than 4.5 times larger than what you'd get from an S&P 500 Index fund. High yields like this can be attractive to dividend investors, but they can also be a sign of a company that's facing material problems. So before buying this stock, it pays to step back and ask if Enbridge can support its dividend.

Enbridge, which has a huge portfolio of midstream assets spread across North America, is highly reliant on the demand for carbon fuels. To put some numbers on that, oil pipelines make up 54% of its adjusted EBITDA, and natural gas pipelines pitch in another 29%. It believes it holds the number-one and -two spots in these industries, respectively, by miles of pipe.

Although these operations are largely fee-based in nature, investors simply aren't fond of anything related to carbon fuels. There's good reason for that, too, given that the world is looking to move away from such energy options and toward renewable choices like solar and wind power. 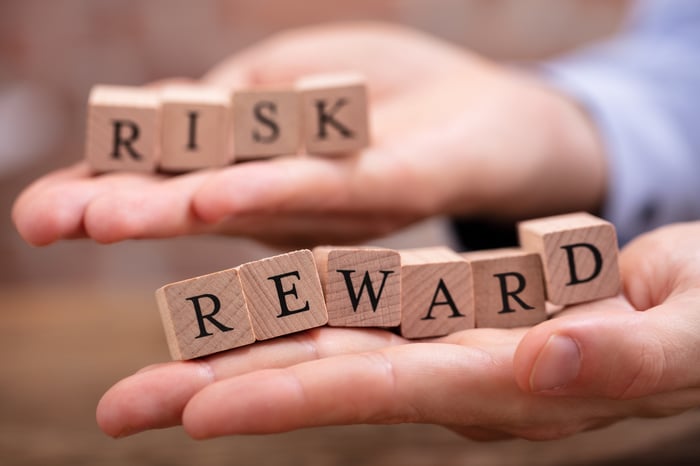 The thing is, energy transitions take time, and even the most aggressive projections suggest that oil and natural gas will be important energy contributors for decades to come. In fact, natural gas is viewed as a transition fuel, since it burns more cleanly than coal and oil. Notably, Enbridge gets about 14% of adjusted EBITDA from a natural gas utility business too, so it has exposure to this fuel in more than one way. The big picture here, however, is that as countries around the world continue to develop, energy demand will increase, and more of everything will likely be needed.

And since Enbrige basically just collects tolls for the use of its assets, that demand should translate into steady and consistent demand for the energy infrastructure it owns. Looking out to the future, meanwhile, the company gets about 3% of its adjusted EBITDA from renewable power operations. That's small, but it has a number of offshore wind projects in Europe that should grow the importance of this segment over time. Enbridge is basically using its carbon fuel core to slowly transition along with the world around it.

So from a business model perspective, Enbridge looks pretty well positioned, even if it's out of step with ESG investors today. But that's just the top-level view, and doesn't fully explain whether or not the company can pay its dividend.

Enbridge has a history of carrying more leverage on its balance sheet than many of its comparably sized peers. While its financial-debt-to-EBITDA ratio has come down recently, investors should watch this number closely. Companies with heavy debt loads can lack financial flexibility when times get tough. So far that hasn't been a problem for Enbridge, which has increased its dividend for more than 25 consecutive years, through both good markets and bad. You don't get to Dividend Aristocrat status by accident -- but that doesn't give the stock a get-out-of-debt-free card. 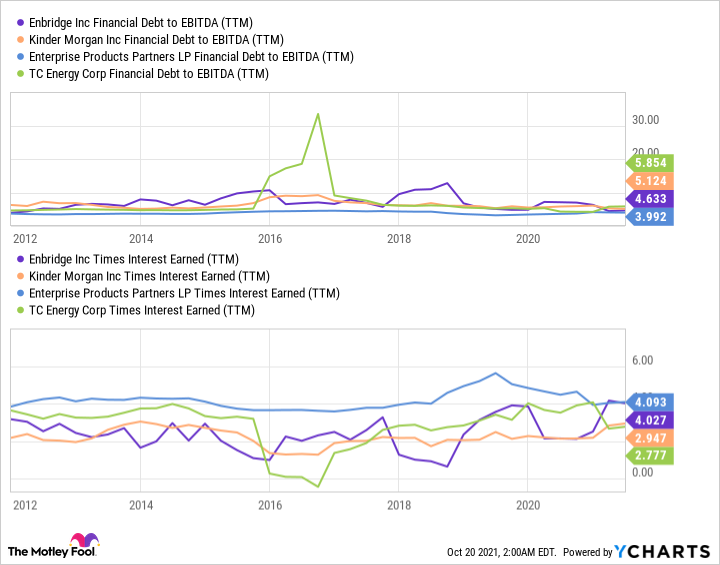 That said, Enbridge covers its trailing interest expenses four times over today, which is strong relative to peers. And, looking over the longer term, its interest coverage has historically been roughly in line with the group as well. So it does, indeed, look like it can handle the debt it is carrying without too much trouble. That helps explain why the credit rating agencies have awarded the company an investment-grade credit rating. All in all, dividend investors probably shouldn't get too worried about debt killing Enbridge's dividend, even though the issue is one that needs monitoring.

In addition to these positives, the company targets a distributable cash flow payout ratio of between 60% and 70%. Given the nature of its business, that is a completely reasonable range. In the second quarter it paid out about 67% of its distributable cash flow, so everything is going according to plan on this front. Stepping back here, it's worth noting that there's ample room for adversity in the payout ratio target range before a dividend cut would be necessary and, thus, little reason to worry here right now.

It looks very much like Enbridge has the financial wherewithal to support its dividend, even if its business were to stumble in the near term.

There are no guarantees in life

While Enbridge's business and its financial situation both suggest that its hefty 6.1% dividend yield is safe and secure, that doesn't mean investors should turn a blind eye to risk. Yes, the company has deftly navigated the energy business for many years, but its heavy debt load should be monitored on a regular basis. And the negative view of carbon fuels could, eventually, be a more important issue. So you'll also want to keep an eye on how Enbridge's core operations shift toward cleaner alternatives over time. But if you want to add a high-yield name to your portfolio, Enbridge seems like it could be a worthy, and safe, choice.