The Chinese search giant is getting a backhanded boost from the government.

Shares of Baidu (BIDU -5.44%) were up 11% since last Friday's close, as of 11:10 a.m. EDT today, according to data provided by S&P Global Market Intelligence, after it was reported Chinese regulators are looking into forcing rivals like ByteDance and Tencent to display their social media content in internet search results.

Baidu is the dominant internet search engine in China. Alphabet's Google is banned from the country, so Baidu has no real competition and owns around 83% of the market. 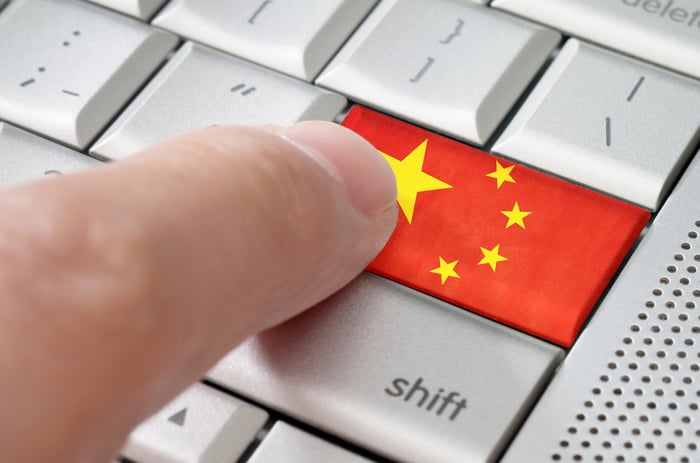 The search engine is already the country's premier destination for advertisers, with year-to-date online marketing revenue up 22% from the same time a year ago, and its online advertising service revenue is also 20% higher.

China has been cracking down on tech companies as Beijing attempts to reel in not only the millionaire and billionaire company founders who were beginning to attract cult-like followings, but to also ensure that the popularity of the companies with the general population doesn't become a threat to the social order imposed.

Although Baidu is a tech stock itself and potentially a target of any enforcement action Beijing undertakes, it has largely escaped scrutiny by regulators. That's undoubtedly because it scrupulously toes the party line, prohibiting forbidden words, phrases, or images from coming up in search results.

Now the government could be rewarding it, either wittingly or not, with a potential large stream of revenue that would be diverted from the social media outlets.

Baidu might be a beneficiary for the moment, but that could all change quickly. The head of China's Ministry of Industry and Information Technology told the government newspaper People's Daily he wanted greater oversight over the internet and his agency would seek to root out monopolistic power. Considering Baidu's dominant position, that makes it a possible target for a crackdown of its own, and it's why investing in Chinese stocks, or stocks dependent upon China for most or all of their revenue, is a risky endeavor.

Why Shares of Baidu, XPeng, and RLX Technology Are Rising This Week

Why Shares of Baidu, RLX Technology, and Lufax Holding Are Rising This Week