The very concept of retirement is changing before our eyes. Large swaths of people -- members of the FIRE movement or otherwise -- have redefined what it means to be a worker in a distributed workforce. The great news is that retirement no longer needs to be a period of complete idleness following 40 years of work; instead, it can be woven into our lives in whatever way we see fit.

Below, you'll find four reasons you might want to keep working -- even in retirement.

Let's face it: Working without having to leave your own home has made staying in the workforce significantly more tolerable. One of the biggest complaints people have about the traditional working career is the commute, even if it's a relatively short one. This has given people the option of working longer without it taking a tremendous toll on their physical and mental health.

If you're able to work from anywhere -- including no-state-income-tax locations like Florida, Tennessee, and Texas -- there's a good argument for continuing to work even if you're financially ready to retire. Working part-time in this capacity can still afford you a huge amount of flexibility with the added benefit of extra income.

You've run the numbers, the simulators, and the Monte Carlo analysis: You have enough to retire. Let's say you've accumulated an impressive $1 million over the course of your career, and with the help of Social Security, you feel that you're ready to hang it up for good. According to the 4% rule, you'd be able to withdraw $40,000 (annually and adjusted for inflation) to cover the costs of a 30-year retirement.

While $40,000 in annual inflation-adjusted withdrawals will take you pretty far -- especially if you live in a LCOL (Low Cost of Living) area -- it's also not a tremendous amount to live on. Taking a part-time job for even $20,000 annually would have the same effect as adding an additional $500,000 to your nest egg; earning $40,000 would be the same as doubling your nest egg.

Even if the salary isn't anything impressive, more money will simply mean more options in retirement, so don't take small amounts for granted. 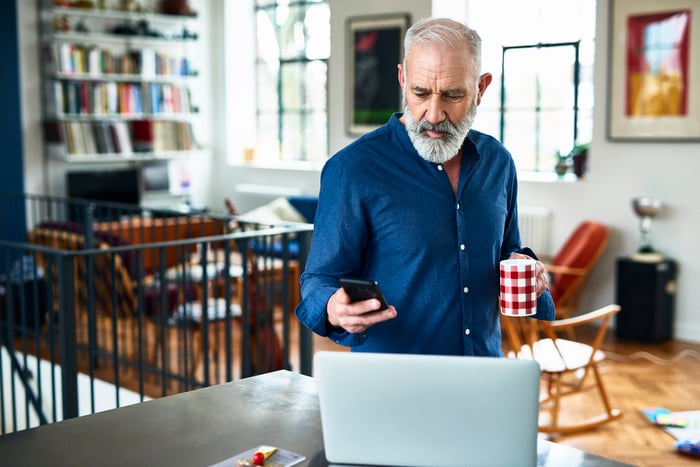 While many seniors are fortunate to have vibrant social lives, it's easy to forget that a substantial number of people derive much of their social interaction from work. People who maintain strong social connections are more likely to live deep into retirement and also more likely to report higher levels of life satisfaction.

Even though a large percentage of the population is attracted to the idea of never having to work again, it's good to remember that this all comes at a cost. The loss of everyday social interaction -- even small morning acknowledgements -- can do a lot in the way of affecting mental health.

This is why it might make sense to consider even a part-time gig that allows you to be around other people -- especially if you're not particularly involved or engaged in other activities.

4. There are many threats to a secure retirement

Suddenly, we find ourselves at a rather unsettling moment when it comes to our finances. The stock market, measured by nearly any metric, is expensive. Inflation has crept up by over 5% since last year, and it's sticky enough to prompt the Social Security Administration to increase benefits by 5.4% in 2022.

Furthermore, nominal interest remains low with real interest rates turning firmly negative. The assumptions behind the famed 4% rule look like they may not even apply today given anemic bond yields. Congress' ability to enact beneficial policy has thus far left a lot to be desired.

This is all to say that working in retirement is one of the few levers you can pull to add another layer of security to your retirement plan. If you have the ability and willingness, adding another income stream seems like a no-brainer -- particularly at this moment in time.

The future of work (and retirement)

Trading time for money means something different to everyone. Getting away from work forever is a common goal, and for good reason. But maintaining even some form of paid employment can go a long way after you've retired from your full-time career. As the list above makes clear, the benefits range from the financial to the psychological, so it's worth thinking about how you might structure your life when the golden years arrive.