The newly public coffee chain is popular with young consumers and could have massive growth ahead.

Coffee chain Starbucks is one of the most successful stocks of all time, with total returns of more than 41,000% since its initial public offering. Recently, a new coffee chain from the West Coast, Dutch Bros (BROS 4.82%), went public. The stock has nearly doubled in its first month of trading; investors hope to have long-term success similar to what Starbucks shareholders have experienced.

But is that realistic? Starbucks achieved its results over decades, so investors will need to be patient with Dutch Bros, a very young company. However, there are signs that it could be a high-growth investment for years to come; here's why.

A brand that its customers seem to love

Coffee can be a tricky industry to operate in. Dutch Bros competes with large chains like Starbucks and Dunkin' Donuts throughout the United States, in addition to many locally owned coffee spots, cafes, and more. Considering that Starbucks was born out of Seattle, the rise of Dutch Bros from the West Coast is arguably even more impressive. 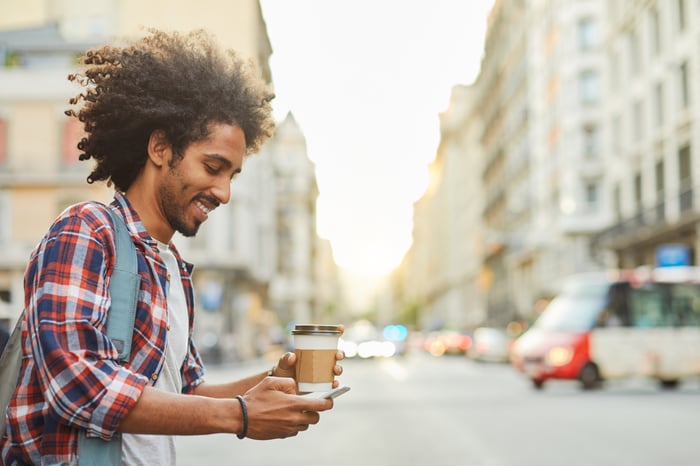 But Dutch Bros has steadily built its brand; it currently operates 471 shops in 11 U.S. states. Its shop model is drive-thru based and focuses on speed and convenience, selling colorful beverage products such as espresso-based drinks, energy drinks, and smoothies.

The company has posted increasing same-store sales for the past 14 years and running. It launched a rewards program this year and picked up 2.3 million members in its first five months, and its smartphone app has an average of 4.9 stars on 249,000 reviews. Given its consistent same-store growth and positive engagement, it seems that Dutch Bros is earning loyalty from its customers, an impressive feat to do in Starbucks' backyard.

It operates with precision

Dutch Bros has steadily built a system as it discovers what works and what doesn't. For example, the company ran a franchise model in its early days. Over time, it restricted franchises to people who worked up through the company's ranks before finally switching to an owner-operator model in 2017, where it only opens up company-owned stores.

The company owns 182 of its shops today, but it will eventually own the vast majority of its shop count because it will open primarily company-owned shops moving forward. Owning its stores could potentially slow down its expansion because it must pay the costs to open each shop on its own, but it gives the company total control over operations and mimics Starbucks' model.

Dutch Bros is already profitable operating this way, posting positive net income since 2018. Its net profit margin was almost 12% in 2019, and it spends a low-single-digit amount of revenue on advertising, benefiting from word of mouth among its customer base. It saw net income drop from $28 million in 2019 to $6 million in 2020 due to $35 million in noncash items; however, the business model itself is profitable. Investors should look for net income to grow with revenue over the coming quarters.

There is a massive runway for expansion

Being profitable and fine-tuning how the business operates prepares Dutch Bros for a new growth phase as a public company. The public markets give companies an injection of capital to help pay for growth, and Dutch Bros has more room to expand.

Dutch Bros currently has 471 shops, but management has outlined a goal to expand this to at least 4,000 shops over time. For comparison, Starbucks reached more than 15,000 locations in the U.S. in 2020.

It costs the company roughly $1.35 million to open a new shop, and management has noted a cash-on-cash rate of return of 35%-75% after two years of opening, meaning that it's recouping a lot of the cash invested in opening its locations. The strong economics of its shops was one of the reasons that management moved to company-owned stores, and going public could help Dutch Bros grow its store count faster, resulting in more growth for the company.

Investors should keep this in mind

It seems that Dutch Bros has created a winning formula with its brand, evidenced by its 14-year streak of growing same-store sales. However, investors should be patient with the company, as becoming the "next Starbucks" is a tall order, and the company's footprint is limited to just an 11-state footprint. It's not promised that it will see success in new markets, where consumer tastes might be different, and competition remains fierce.

However, I see the ingredients for success, and with so much room for an expanding store count, I can see the path to growth in front of it. Investors who can stomach the volatility of a newly public stock should consider Dutch Bros an exciting and potentially rewarding long-term investment.