Another new drug candidate for the treatment of Alzheimer's disease failed miserably in a clinical trial.

Cortexyme (CRTX 5.83%) stock has been hammered in response to a failed clinical trial for its experimental Alzheimer's disease treatment. The clinical-stage biotech stock immediately plummeted 75%, catching many investors by surprise.

If you're new to biotech investing, there are some important lessons to be learned from the failure Cortexyme recently reported. Here's what you need to know in order to avoid heavy losses in the future. 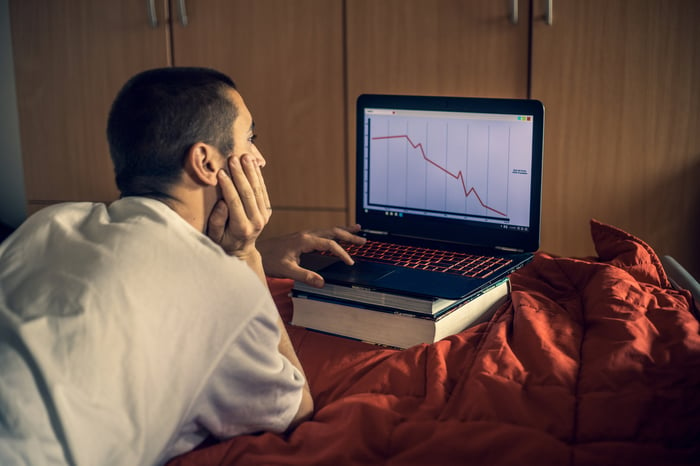 Cortexyme's lead candidate atuzaginstat inhibits enzymes secreted by mouth bacteria called Porphyromonas gingivalis. We know this microbe plays a big role in gum disease. It's also been associated with Alzheimer's disease, but the connection, if any, is unclear.

During the Gain trial, investigators randomized 643 patients to receive one of three different doses of atuzaginstat, formerly COR388, or a placebo. Unfortunately, the Gain study missed both its primary goals, a measurable reduction to the pace of cognitive decline as measured by the ADAS-Cog11 and ADCS-ADL tests.

As is often the case for financially strapped clinical-stage drugmakers, Cortexyme presented its failure as a success. According to management, it was "a great day for Alzheimer's research" with "positive outcomes across multiple fronts."

The Gain trial missed its co-primary endpoints, but Cortexyme found a subgroup of patients who didn't fail. There were 242 participants with active Porphyromonas gingivalis infections who were also given the highest dose and showed a significantly lower rate of cognitive decline, as measured by the ADAS-Cog11 test.

Sadly, the liver toxicity results Cortexyme reported will bring the entire atuzaginstat program to a close. That's because a whopping 15% of patients who received the high dose had elevated liver enzymes in their blood samples.

Two patients with elevated liver enzymes also had elevated bilirubin levels. Bilirubin is a natural byproduct of red blood cell turnover that healthy livers remove easily. All biopharmaceutical investors need to understand the Food and Drug Administration (FDA) will put an end to new drug candidates when they damage the liver enough to reduce its ability to function properly.

Cortexyme has atuzaginstat aimed at millions of relatively healthy people who have early-stage Alzheimer's disease. On their own, elevated liver enzymes among 15% of patients who received the high dose is a terrible result. With two patients who also presented reduced liver function, though, this drug candidate is completely finished.

What's next for Alzheimer's disease?

So far, Aduhelm from Biogen (BIIB -1.35%) is the only drug approved to treat Alzheimer's disease patients. Hot on its heels, though, is a similar drug from Eli Lilly (LLY 2.53%) called donanemab.

On its third-quarter earnings call, Lilly told investors about a new rolling submission for donanemab to the FDA. The company intends to use the same accelerated approval pathway that worked for Aduhelm and complete the submission in the next few months.

Lilly is running pivotal trials with donanemab against a placebo that should produce top-line data in 2023. The big pharma is also planning a head-to-head trial against Aduhelm itself. Aduhelm earned accelerated approval because it was able to reduce amyloid protein fragments before they can aggregate into plaques associated with Alzheimer's dementia.

Years from now, we'll look at Alzheimer's dementia as a collection of related disorders with a similar end result. While drugs like Aduhelm and donanemab might be effective for some patients, we still don't know how to find these patients. Until we know a lot more about this disease, it's best to avoid clinical-stage drug developers that bet heavily on being the first to effectively treat a disease.

Down 76%: Is Cortexyme Stock a Bargain?

Here's Why Cortexyme Is Imploding on Wednesday

Is This Under-the-Radar Stock Set to Succeed in Alzheimer's Disease?
413%