The gaming hardware specialist is sitting on secular catalysts that could help it turn its fortunes around.

The company enjoyed eye-popping growth in 2020 as the demand for video games and gaming hardware shot through the roof amid the coronavirus crisis, but supply chain problems, weaker-than-expected earnings, and lowered guidance have sent the stock tumbling this year.

In what seems like a bad time to buy, why is this company worth stocking up on before the end of 2021? Read on to find out. 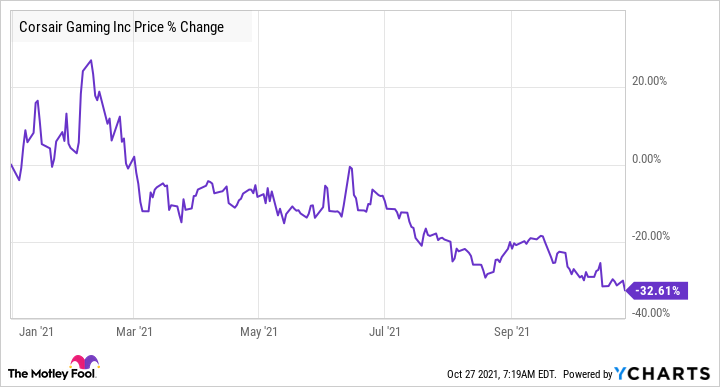 The near-term outlook is, admittedly, disappointing

Corsair will release its third-quarter earnings results on Nov. 2, but its preliminary report disappointed investors. The company expects Q3 sales of $391 million, which would translate into a 14.4% decline over the prior-year period's revenue of $457 million. Additionally, Corsair has trimmed its full-year forecast and expects revenue to range between $1.825 billion and $1.925 billion.

The company was previously anticipating 2021 revenue of $1.9 billion to $2 billion but expects the lack of affordable graphics cards, as well as supply chain and logistic challenges, to ding its annual revenue by 10%. Not surprisingly, investors have decided to dump Corsair Gaming shares. However, the stock's decline has made it an enticing buy, especially considering that its fortunes have the potential to turn around thanks to secular catalysts.

Corsair Gaming CEO Andy Paul recently said that the company is witnessing an acceleration in "gamers and streamers buying gear for the first time or upgrading faster than in the past." That's not surprising; the demand for video games and related hardware and software in 2021 hasn't dropped off after last year's pandemic-fueled surge. 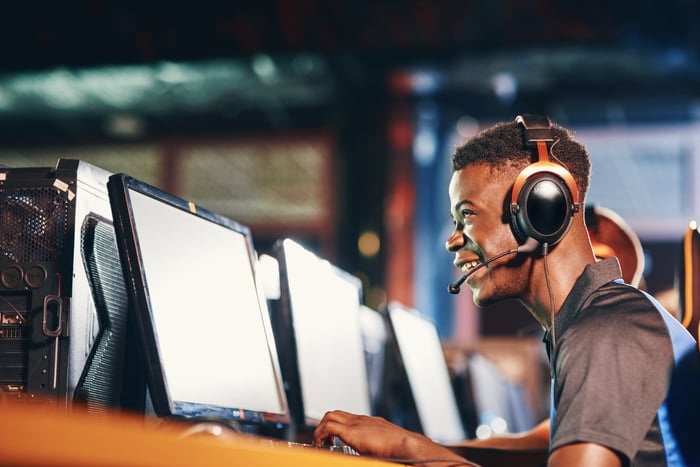 The gaming hardware market is being driven by an increase in demand for the latest consoles, gaming PCs, peripherals, and components like graphics cards and memory chips. Sales of gaming and streaming peripherals and components are expected to hit a combined $15 billion this year, and Bitkraft points out that the market will continue to expand as gamers purchase the latest peripherals, such as virtual reality (VR) headsets.

It is worth noting that there was a 62% jump in spending on PC gaming hardware and accessories in the U.S. last year, according to the NPD Group. The trend has continued in 2021. Hardware spending increased 45% year over year in the month of August despite supply constraints. Corsair believes that there is pent-up demand for gaming components and peripherals for two reasons.

First, consumers who took up gaming last year are likely to upgrade or improve their setups, which will lead to stronger demand for headsets, keyboards, and mice. Second, the short supply of graphics cards means that there are a "large number of gaming enthusiasts in the wings waiting to build a new PC on top of the elevated numbers of people that actually did build a new gaming rig."

Jon Peddie Research forecasts that sales of high-end PC gaming hardware could grow at an annual rate of more than 20% through 2025, which bodes well for the market that Corsair Gaming operates in. In short, the demand for Corsair's products is likely to remain robust in the future.

Investors need to look past the short-term issues

The problem for Corsair is that the short supply of chips is restricting it from meeting the demand. The global chip shortage could persist through the second half of 2022, according to Gartner, so Corsair may find the going tough in the near term. But the stock looks like an ideal bet for investors looking to buy a cheaply valued stock with the potential for long-term gains.

Analysts expect the company to clock double-digit percentage earnings growth rates over the next couple of years. Given that Corsair's trailing earnings multiple of just 15 makes it substantially less expensive than the S&P 500's multiple of over 30, investors have an opportunity to buy this potential growth stock on the cheap before its turnaround begins.