I think many investors are missing the forest for the trees when it comes to Teladoc Health (TDOC 2.25%). That's especially the case in the aftermath of the company's third-quarter update on Wednesday.

Instead, investors once again seem to be fretting about slowing revenue growth. But a slowdown should be absolutely expected after the COVID-19 momentum that kicked into gear last year.

Teladoc increased its full-year revenue outlook -- just as it did in the second quarter. And its prospects look better than you might think. Here are three reasons why. 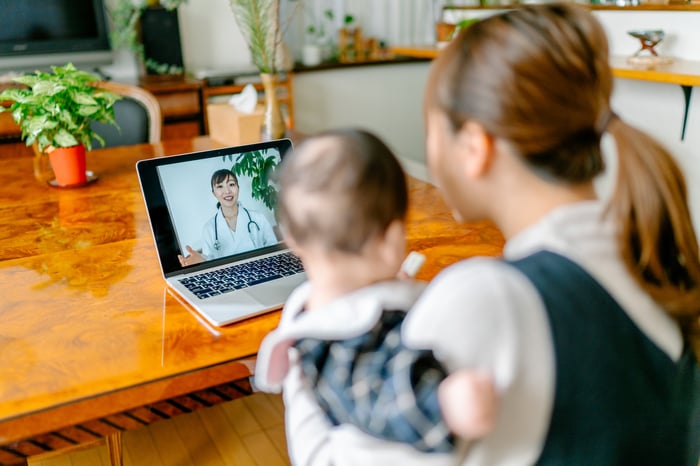 Let's first acknowledge that Teladoc's top line continues to grow robustly. The company reported revenue in the third quarter of $521.7 million. That's an 81% year-over-year jump and an increase of nearly 4% from the previous quarter.

However, I think we should also look closely at other key metrics that indicate how Teladoc's business is performing. And they're all trending upward.

Most importantly, total visits rose 37% year over year to nearly 3.9 million. That total is a nice bump from the 3.5 million visits in the second quarter. Even with most lockdowns a thing of the past, people are still choosing to receive care virtually.

When all of these metrics are trending positively, it bodes well for Teladoc's business going forward.

2. A big new contract about to become effective

There are several downsides to fixating on one quarterly update. One of the biggest is that the numbers from the most recent quarter don't reflect anything about new business that a company has won that hasn't been realized yet.

Earlier this year, Teladoc landed a big new contract with Health Care Service Corporation (HCSC). It's the fifth-largest U.S. health insurer. The HCSC deal is a great example of how Teladoc's acquisition of Livongo is paying off. The big insurer will offer Teladoc's chronic-care solutions for diabetes and hypertension to its commercial fully insured members in multiple markets.

After the agreement with HCSC was made, Teladoc Health CEO Jason Gorevic referred to it as "a landmark deal" for the company. However, Teladoc hasn't seen any growth from the new contract yet. That won't happen until early 2022. Gorevic expects the growth to continue throughout the next two or three years. Teladoc's Q3 numbers won't tell you anything about what's on the way with HCSC.

On a similar note, Teladoc Health's latest results don't even hint at the potential for one of the company's most exciting products thus far -- Primary360. The company launched Primary360 as a pilot two years ago. Earlier this month, it made the virtual primary-care service available to commercial health plans, employers, and other organizations across the U.S.

Primary360 has helped identify and treat previously undiagnosed chronic diseases and connect members with virtual specialty-care services, including mental health support. I expect that this is just the beginning of a longer-term success story.

If you just see the trees, you'll focus on Teladoc's slowing revenue growth. You might also fret that the company remains unprofitable. And you'll no doubt be dismayed by another decline for the healthcare stock after the Q3 update.

However, the smartest thing investors can do right now is to look at the bigger picture with Teladoc. Its underlying business remains strong. Key metrics are absolutely heading in the right direction. The company has a big new contract with HCSC about to go into effect plus new deals with Primary360.

The virtual-care market opportunity is huge. Teladoc Health is the clear leader in this market. When you see the "forest" with Teladoc, you'll realize that there's a whole lot of green.

Did Teladoc Just Take a Big Step Towards Profitability?