The biotech stock rose nearly $7 a share from Monday through Thursday. 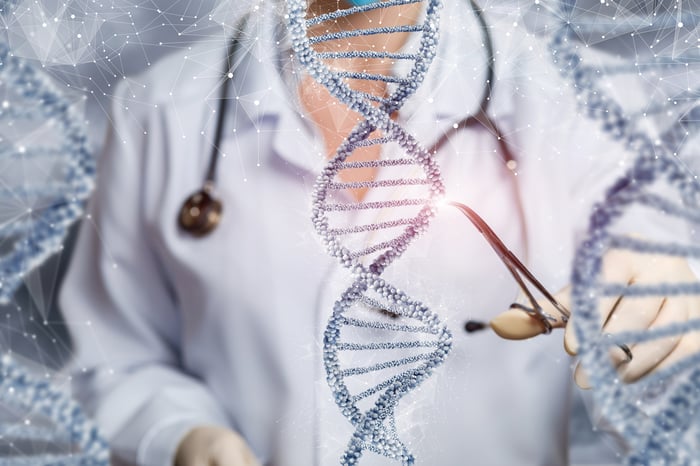 The other recent news that may be bumping the stock is founder and CEO Sekar Kathiresan and Andrew Bellinger, Chief Scientific  Officer and Chief Medical Officer, spoke at the Jefferies Gene Therapy/Editing Summit on Thursday, discussing the safety and efficacy of their lead therapy, VERVE-101.

Verve Therapeutics is in the preclinical stage. It specializes in treating cardiovascular disease through gene-editing therapies. It has two drugs in its pipeline, led by VERVE-101, which attempts to help the liver clear out LDL-C, considered a bad cholesterol, from the blood. LDL-C is considered a key contributing factor to cardiovascular disease, and the hope is that VERVE-101 can knock out the PCSK9 gene to lower LDL-C levels in the blood. Initially, the company is focusing on patients with a genetic mutation that leads to high LDL-C levels. However, if the drug is proven safe and effective, Verve is hoping for more applications of the therapy. The company's other candidate is ANGPTL3, which works to fight hyperlipidemia, abnormally high levels of lipids in the blood that lead to fatty deposits in the arteries. Like VERVE-101, ANGPTL3 is focusing first on fixing a gene that regulates cholesterol and triglyceride metabolism.

If the gene-editing company's therapies prove safe and effective, that would be a big deal. As it is, the compound annual growth rate for gene-editing therapies is expected to be 17.2% through 2027, reaching $15.79 billion by that time, according to a report by Emergen Research. The potential to not only treat high cholesterol levels, but to eliminate them, would be a game-changer. However, for the immediate future, statins are going to be much cheaper, so any gene-editing to treat cholesterol would have an uphill climb.

Verve did raise $306.7 million through its IPO and had, as of June 30, $417.6 million in cash; so it has enough money for now to fund its pipeline through the next two years, based on its burn rate of $52.9 million per quarter that it showed in the second quarter.

Why Verve Therapeutics Stock Crushed It This Week

Why Shares of Verve Therapeutics Shot Up 44.9% This Week