It took a long time, but the Nasdaq Composite (NASDAQINDEX:^IXIC) finally managed to set an all-time record high on Friday, catching up with the strong performance of other major market benchmarks. Yet those gains could be short-lived, because on Friday morning, the Nasdaq looks primed for a big pullback. Nasdaq futures fell almost 1% as of 8 a.m. EDT, underperforming the rest of the market.

The reason is earnings season, as a couple of industry giants in technology reported their latest results late Thursday. Premarket declines in Apple (NASDAQ:AAPL) and Amazon (NASDAQ:AMZN) are setting the negative tone to start out the final day of the week, but it'll be interesting to see whether investors end up focusing on the longer-term growth trends that are supporting these companies rather than simply concentrating solely on short-term numbers. Below, we'll go into the details of the two earnings reports.

Shares of Apple were down 3.5% in premarket trading on Friday, more than reversing the 2.5% gain it posted in Thursday's session. The iPhone giant has seen plenty of sales for its popular electronic devices, but investors have ramped up their expectations so far that it's hard for the multi-trillion dollar company to live up to them.

Apple's fiscal fourth-quarter earnings release had plenty of good news. Revenue jumped 29% year over year to a record $83.4 billion. Earnings of $1.24 per share met the consensus forecast among investors following the stock. The company highlighted record performances for its services segment as well as its Mac lineup.

Yet Apple has proven not to be immune from the impacts of supply chain disruptions. CEO Tim Cook said in the earnings conference call that supply issues cost the company $6 billion in revenue during the quarter, specifically due to shortages of silicon and manufacturing disruptions due to the pandemic. Investors seemed to have their confidence knocked by that figure, having believed that a company of Apple's size and scope would somehow be able to avoid the same pressures affecting businesses across the globe.

With a market capitalization of $2.5 trillion, a downward move of this size costs investors tens of billions of dollars overall. Yet those same shareholders have benefited greatly from a strong rise in Apple stock over the past year, and in relation to its long-term performance, today's downward move is insignificant.

Shares of Amazon took an even bigger hit in the premarket session, falling more than 4%. The e-commerce and cloud computing giant saw declines in several key business metrics, prompting concerns about its growth prospects at least in the near term. 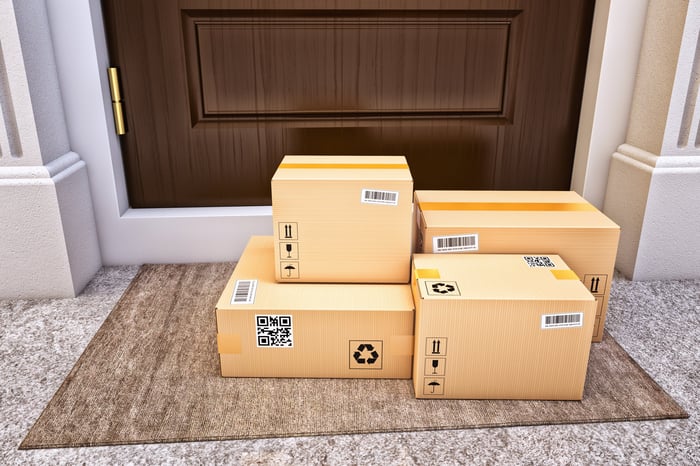 Amazon's numbers showed just how tough it was for the company to compete against its historic gains from last year. Net sales managed to climb 15% to $110.8 billion. However, net income got cut almost in half compared to year-ago levels, and earnings of $6.12 per share fell far short of expectations from investors. Operating income and cash flow fell substantially.

New CEO Andy Jassy argued that Amazon's results reflect the company's choice to do what's best for customers rather than optimizing short-term profits. Yet those efforts are proving costly, and Jassy predicted billions of additional costs to deal with labor supply shortages, higher wages, global supply chain issues, and higher expenses for freight and shipping services. That statement had shareholders bracing for potential weakness in the key holiday quarter as well.

For both Amazon and Apple, the realization that even the biggest businesses in the world aren't finding easy answers to current challenges comes as a shock. For the most part, investors are hopeful that those headwinds will ease up soon, but good times might take a lot longer than they would prefer.