If these electric-vehicle manufacturers can deliver on their plans, the sky could be the limit for their stock prices.

In 2015, Elon Musk famously projected that Tesla (TSLA 2.52%) would be making "a few million" cars per year by 2025. Many laughed it off, as the electric-vehicle (EV) industry was still in its nascent stage, and Tesla had built just about 33,000 units of its only luxury sedan, the Model S, the previous year.

On Oct. 25, Tesla bagged an order of 100,000 vehicles from one customer alone, days after it announced it had delivered a record 241,300 cars in just the third quarter.

Tesla's growth reflects the potential in the global electric-vehicle market. From automakers to providers of batteries, charging infrastructure, and ancillary products and services, companies of all types and sizes are pumping billions of dollars into EVs, and many watching their stocks hit dizzying heights.

The next decade could be a huge one, and while Tesla might seem a no-brainer, here are three other solid EV manufacturer stocks you could buy and hold for the next decade.

The most underrated yet promising EV stock

When you're talking about electric vehicles, you can't afford to ignore what's happening in China, the world's largest EV market. China wants 25% of its all new cars sold by 2025 to be electric. If you think that's an ambitious goal, consider that EVs already accounted for 12% of total car sales in the nation in the first half of 2021. One EV company that's already thriving in China is BYD (BYDDY -2.92%). 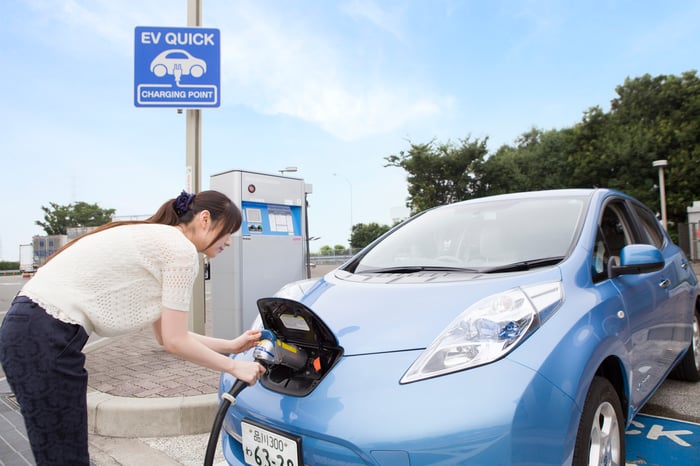 In fact, I consider BYD to be one of the most underrated EV stocks, given its solid foothold in not just the commercial EV market but also the indispensable battery market. According to FT.com, BYD is:

It's hard to ignore these stunning facts. BYD makes hybrids, commercial vehicles, batteries, and monorail systems, and it also owns a semiconductor business that it plans to spin off. BYD's new energy vehicle (NEV) sales soared 276% year over year in September to hit record highs of nearly 70,000 units, and its NEV sales jumped almost 87% during the quarter ended Sept. 30. NEVs include battery-electric, plug-in hybrid, and fuel-cell EVs.

In fact, BYD was China's leading NEV producer in September, with five of its models making it to the top 15 NEV list, according to CNBC.

BYD plans to export cars, and it could potentially even become one of the largest battery companies in the world if it can bag some deals that are reportedly under negotiations. In industry reports are to be believed, BYD is planning to raise its battery prices by nearly 20% from November. The best part is that BYD is already profitable, and with Warren Buffett's Berkshire Hathaway also owning a stake in BYD, this one's a compelling EV stock for the long haul.

We could see a flurry of EVs hit the roads over the next decade, and one thing they'll all require is a strong charging network. Yet while there are several EV-charging pure plays to bet on, an auto giant like General Motors (GM 0.51%) could surprisingly end up with an edge in EV charging, even as it aggressively rolls out EVs in the coming years.

General Motors recently announced it'll build 40,000 of its own EV charging stations under the Ultium brand starting in 2022, and it will be available for home and commercial use for all EV users. GM also signed up multiple charging providers earlier in the year as part of its Ultium Charge 360 charging network program. Yet as my Fool colleague Travis Hoium explained, the partnerships expose the lack of differentiation and bargaining power in the hands of EV charging companies, and although a tie-up with GM could drive traffic to their locations, consumers will eventually pay GM for the services.

All of this while GM rapidly scales up its EV presence by investing $35 billion and launching 30 new Ultium-powered EVs by 2025, including Buick crossovers, a Chevrolet crossover priced at around $30,000, Chevrolet trucks, and GMC, Hummer, and Cadillac EVs.

By the end of the decade, GM expects revenues from EVs to jump from about $10 billion in 2023 to nearly $90 billion. That effectively means EVs could make up nearly 40% of GM's total projected revenue by 2030. GM believes it could even catch up with Tesla by 2025. Given GM's expertise and engineering prowess, I'd be willing to make a bet on the company's ambitions.

GM isn't the only company that wants to beat Tesla. China-based luxury-car maker Nio (NIO -2.32%) is already on the job. Nio is selling a record number of vehicles quarter after quarter, and it's focused on building brand loyalty -- much like the one Tesla enjoys -- through branded merchandise and premium services, like Nio Houses, which offer Nio users exclusive access to a host of experiences, including cafes, libraries, and co-working spaces.

And Nio isn't limiting its brand-building strategies to China. In September, not only did it deliver its first ES8 vehicles in Norway, but it also opened a Nio House. The ES8, a six- or seven-seater SUV, is among the three models Nio currently sells. The other two are a five-seater SUV, the ES6, and a five-seater electric coupe SUV, the EC6.

Above all, Nio gives potential buyers an enviable option that's also a huge competitive advantage: They can buy Nio cars without batteries, save nearly $10,000, and subscribe to its battery-as-a-service (BaaS) plan. So for a monthly fee, such customers can subscribe to batteries of various capacities and charge and swap them as needed at Nio's battery swap stations.

Nio's sales in China still pale in front of Tesla's, but Nio is growing exponentially without question: As of the end of Jan. 31, Nio had delivered 82,866 vehicles in total since inception. That cumulative number had risen to 142,036 by Sept. 30. With Nio's flagship luxury sedan ET7 ready to roll out next year and the company also planning to expand is footprint into Europe, its sales numbers should only pick up from here. Importantly, if Nio can bring out a mass-market brand in the near future as planned, it could catapult the company, and its stock, to new heights.