With the U.S. cannabis market booming, are domestic players the better option?

Cannabis is illegal at the federal level in the U.S. That makes it difficult for Canadian companies to expand in the market. But that hasn't stopped domestic players from spreading their roots. Even with a limited legal market, U.S. cannabis companies are thriving as state legalization keeps ramping up. Among them, Illinois-based Cresco Labs (CRLBF 0.27%), with a market cap of $2.1 billion, is shining its way through the list of top contenders in the cannabis space.

Even though Canopy Growth (CGC 1.03%) is a strong company and also bigger (with a market cap of $5.3 billion), there are other factors to consider before investing. Let's take a look at which pot stock is the right one to put your money in at the moment. 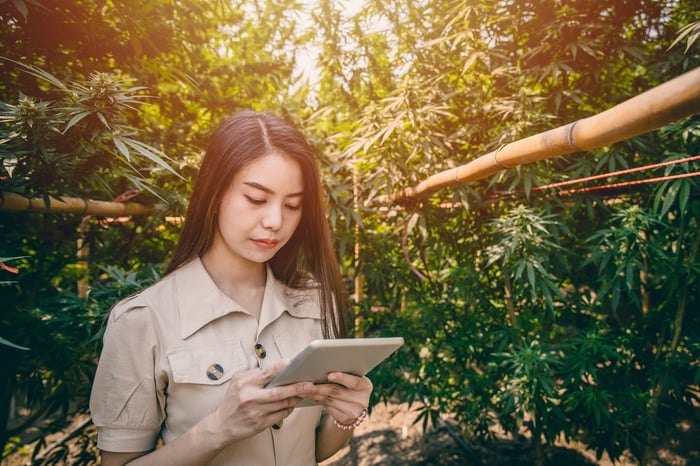 With 40 dispensaries across 10 states, this pot stock is grabbing all the attention. This vertically integrated multistate operator has been consistently growing revenues by targeting key cannabis markets like Pennsylvania, Illinois, and Ohio that offer limited licenses. These states put a ceiling on how many licenses they issue and how many stores can operate in a state. This has allowed Cresco to build a loyal customer base for its popular brands like Mindy's Edibles, High Supply, and more, which contributed to its $101 million just from retail revenue in its second quarter ended June 30. Illinois, a rather new recreational market (legalization happened in January 2020), has been seeing exceptional sales.

The company's total revenue came in at $210 million, a whopping 123% year-over-year increase. Cresco also reported a net profit of $2.7 million in the second quarter, versus the huge $41 million loss in the year-ago period. Cresco expects to generate $1 billion in total revenue by the end of 2021, with gross profit margins crossing 50% in the next two quarters.

We will know more of Cresco's plan for this year and beyond when it reports its third-quarter results on Nov. 11.

Canopy Growth, a reputed name in the cannabis space, is making investors skeptical because of its delay in achieving profitability. The company is growing revenue, but the growth isn't sufficient to bring in profits. Net revenue in its first quarter (ended June 30) came in at 136 million Canadian dollars, a 23% increase year over year. The company saw strong growth in the Canadian recreational and medical markets. Canopy's wide array of cannabis derivatives (additional recreational products that Canada legalized in October 2019) has been a hit with consumers, driving recreational sales.

Financially, Canopy is in a safe position for now mostly because Constellation Brands is backing it. The U.S. beverage giant partnered with the company in 2018 and has a 39% stake in Canopy after exercising its warrants. It ended Q2 with $2.1 billion in cash and short-term investments.

But unless Canopy starts making profits, this backup might not be able to hold it much longer. The company's international cannabis revenue declined 8% year over year to CA$19 million in Q1 due to coronavirus-related lockdowns in many countries. The U.S. market is still a long shot for the company. Meanwhile, Canopy can use its global presence (Europe, Africa, and South America) and strength in the Canadian markets to grow its revenue and generate profits. Management claimed in Q1 results that the company is on track to accelerate revenue growth and achieve positive earnings before interest, tax, depreciation, and amortization (EBITDA) by the end of fiscal 2022. It did manage to reduce its EBITDA loss to CA$64 million, versus $92 million in Q1 2021.

Which pot stock should you choose?

Between these two, Cresco Labs is the safer option. Canopy has a lot of opportunities in the U.S. market due to Constellation's market presence, but when federal legalization happens, domestic companies will be the first to benefit. Moreover, Cresco Labs is already profitable, while Canopy is still struggling to achieve positive EBITDA. Cresco Labs is a sure-shot option for investors who want to grow their money. Growth isn't impossible for Canopy, but it could take a while. Considering all the positives of Cresco Labs, it is the better cannabis stock to buy right now for the long term.

Sushree Mohanty has no position in any of the stocks mentioned. The Motley Fool owns shares of and recommends Constellation Brands and Cresco Labs Inc. The Motley Fool has a disclosure policy.