The coronavirus pandemic has accelerated the digitization of enterprises. The rise of cloud computing also encouraged them to move some of their computing infrastructures and applications from their on-premises environments to the cloud. As a consequence, with hardware-based legacy solutions becoming less relevant, old tech companies have been facing the threat of declining revenue.

However, investors should pay attention to the old tech network specialists Juniper Networks (JNPR -2.00%) and F5 Networks (FFIV -1.45%). Their recent earnings results show that they have successfully updated their offerings to address new growth opportunities, especially in the cloud.

Over the last decades, Juniper has been competing with the networking giant Cisco Systems. In particular, its routers, which are devices that carry and direct traffic between different networks, gained traction with large enterprises and telecom service providers.

However, until recently, the company had failed to update its legacy offering to address the cost-efficient scale and performance webscale providers demanded to build their large network infrastructures. As an illustration, Juniper's cloud segment revenue dropped from $1.3 billion in 2017 to $1.1 billion in 2019. In contrast, the emerging and innovative cloud network specialist Arista Networks posted double-digit revenue growth during that time frame. 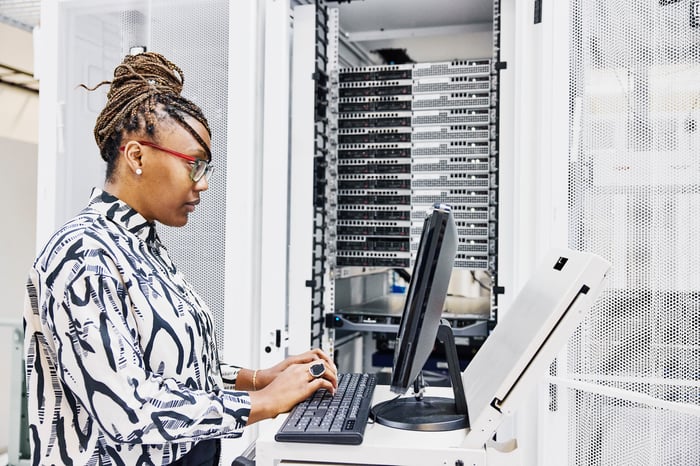 Eventually, Juniper managed to improve its cloud offering, as evidenced by the strength of its cloud business during the third quarter. Revenue from cloud reached $303 million, up 19.8% year over year, way above the company's top-line growth of 4.4%. As a result, cloud represented 25.5% of revenue, compared to 22.2% in the prior-year period.

Granted, those efforts involved extra investments that lowered the company's profitability, as illustrated by the declining gross margin and operating margin over the last several years in the chart below. 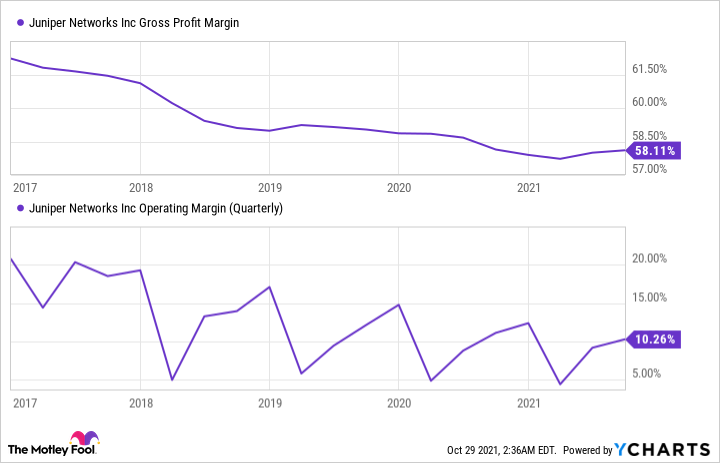 But with scale and improving operations, that trend should soon reverse. During the latest earnings call, management anticipated operating margin to improve by at least 100 basis points next year despite extra costs because of supply chain disruptions.

Thus, taking into account the successful shift of the company's portfolio that should lead to increased revenue and improving margins, investors should have a closer look at the company given its reasonable valuation at a price-to-earnings (P/E) ratio of 17.

Like Juniper, F5 had to update its portfolio to mitigate the secular decline of its legacy hardware-based business to address cloud environments. F5's legacy products consist of devices network engineers place in front of application servers to distribute traffic load between them for better performance and security.

So with various acquisitions over the last couple of years and with internal developments, the company beefed up its software and security offerings, doubling its total addressable market from $14 billion in 2020 to $28 billion in 2023.

The latest quarterly results show that the company's shift to software is materializing. Revenue from software grew 35% year over year to $152 million, representing 22.3% of total revenue, compared to 18.3% in the prior-year period.

Looking forward, management expects revenue from software to grow in the range of 35% to 40% over the next 12 months and stay above a compound annual growth rate (CAGR) of 20% by 2025. The explosive growth of applications over the next several years should support the demand for the company's new software solutions. According to the research outfit IDC, the number of apps developed on modern technologies should grow at a CAGR of 36% between 2020 and 2025 to reach 1.16 billion.

In the meantime, companies still rely on their on-premises infrastructures to serve the global growing consumption of applications. Therefore, the forecasted long-term high- to mid-single-digit revenue decline in the company's legacy business is not happening as fast as was expected a few years ago. Management even anticipates that revenue from legacy products should stay flat or increase slightly over the next 12 months.

And overall, it expects the top line to reach a CAGR of 8% to 9% over the long term. What's more, thanks to its legacy mature offering, the company remains highly profitable during its transition to software, with a trailing-12-month operating margin of 15.1%, down from 16.7% a year ago.

So with the stock still trading at a modest forward P/E ratio of 18, investors should watch F5.