The stock's momentum from last week is continuing as the company prepares to report its third-quarter update.

Many electric vehicle (EV) stocks regained momentum last week, and electric semitruck start-up Nikola (NKLA 9.49%) was no exception. Nikola shares are up almost 20% in just the past four trading days. That momentum continued today, with shares jumping as much as 9.3% higher before retreating for a gain of 4.4% as of 2:55 p.m. EDT.

Some of the momentum in the EV sector comes as President Biden and Democratic congressional leaders work to finalize his Build Back Better initiative and pass the bipartisan infrastructure bill that the Senate has already passed. Nikola isn't just looking to build battery-electric semitrucks, though. It also has plans for hydrogen fuel cell electric vehicles (FCEVs). Support for growing the hydrogen economy and associated infrastructure could be a timely boost for the company as its first vehicles are soon coming to market. 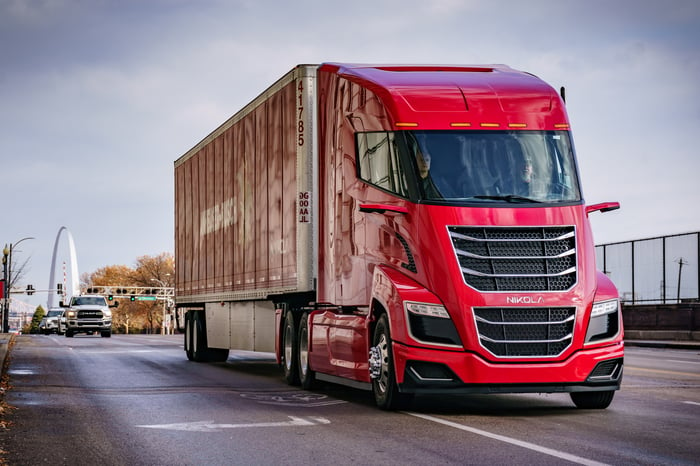 Nikola is approaching commercialization of its battery-electric Tre models, which it says will be available starting before the end of the year. But at the same time, it is working to build out infrastructure for its FCEVs scheduled to be available beginning in 2023.

Nikola has announced its participation in the Hydrogen Heavy Duty Vehicle Industry Group, which consists of industry leaders working to standardize hydrogen refueling. The company also recently announced an agreement with a producer and distributor of carbon-reducing fuel for heavy-duty truck fleets to co-develop and construct hydrogen fueling stations and associated infrastructure. It separately signed an agreement with TC Energy to construct large-scale hydrogen fuel hubs.

As the framework currently stands, the Build Back Better plan includes a rebate program for hydrogen fuel cell refueling equipment as well as credits for electricity generated using clean hydrogen. Investors seem to be thinking Congress will come to an agreement, and companies like Nikola will be beneficiaries, helping to explain the recent gain in shares. The company reports its Q3 financial results this Thursday, Nov. 4, and investors will likely be paying close attention.