Investors can benefit from investing in technology companies that pay significant dividends (if they know where to look).

It's hard to find investment income right now. Savings accounts pay just 0.06% on average, while the S&P 500's current dividend yield is just 1.33%. Inflation is chewing up your money, averaging 3.2% historically, and has been well above average in 2021. In September, the U.S. inflation rate came in at 5.39% compared to 1.37% last year.

Fortunately, mature technology companies can generate large amounts of cash that management returns to its shareholders as high-yield dividends. Here are three great examples to consider adding to your portfolio. 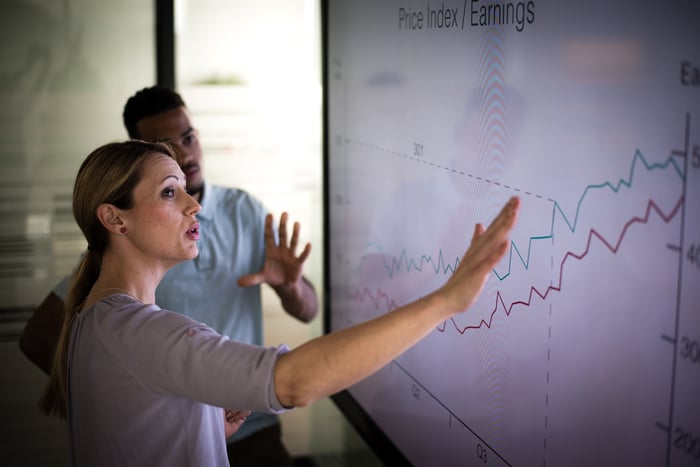 Technology hardware companies that thrived before the digital age have had to reinvent themselves to remain competitive. Xerox Holdings (XRX 0.41%) is a prime example, forced to innovate after spending decades relying on selling its printers and copiers to businesses and consumers.

Today, Xerox still sells equipment, but mostly to get its customers in the door, making it a complementary aspect of the business instead of its main focus. In its most recent quarter, second-quarter 2021, just 24% of revenue came from equipment sales, and the rest came "post-sale," revenues generated from maintenance, services, and consumable supplies.

Software has become an increasingly important part of the workspace, and Xerox is branching into this as well, offering software for workflow management, print management, and cloud-based document sharing.

Management is guiding for full-2021 revenue of $7.2 billion, a 2.5% increase over 2020. At least $500 billion of that should be free cash flow, which management intends to deliver half of to shareholders through dividends and stock buybacks; it gives the dividend payout plenty of breathing room, so investors should be able to continue enjoying the resulting 5.3% dividend yield.

Data generation (and how much we create) has become a frequent talking point in the investing community, but few have talked about how data is stored. Seagate Technology (STX -2.04%) designs and builds mass storage solutions, including hardware like storage drives, cloud storage, and software.

Seagate has sold a variety of hard drives for years because the PC has been our primary computing tool. However, computing has become more mobile, and digital storage solutions such as cloud-based storage are becoming increasingly popular.

Seagate's business is slowly transitioning from these legacy PC hard drives to what it calls its "Nearline" series, mass-capacity hard drives for cloud storage and servers. Companies are becoming Seagate's primary customer instead of individual device users. Demand for its Nearline drives has grown at a 40% rate from 2017 to 2021. Zoom recently signed a multi-year agreement to store its meeting recordings on Seagate's storage-as-a-service (SaaS) cloud platform; investors should look for more developments like the Zoom deal moving forward.

The company's $10.7 billion in revenue for the full 2021 fiscal year was virtually flat with 2020, but analysts expect revenue growth to improve to nearly 11% next year. Free cash flow was $1.1 billion in 2021, and the company's resulting 36% dividend payout ratio leaves plenty of cash to afford its payout.

Most dividend investors are familiar with telecommunications company AT&T (T -2.22%), one of the only wireless carriers in the U.S. Its massive dividend currently yields a whopping 8.16%.

Such a high-yielding dividend is typically a "red flag" for investors, because it could signal that investors don't trust the company to afford the payout. But AT&T's telecom business is stable, almost like a utility, because consumers generally pay their phone bill as reliably as their water or electricity.

AT&T has spent tens of billions of dollars over the past five years to build an entertainment business, buying DirecTV and Time Warner, but has since changed course. This summer, it sold DirecTV and has a pending agreement to spin off Time Warner in a deal with Discovery to form a new stand-alone company with the combined entertainment assets.

The spin-off will make AT&T a dedicated telecom business and provide it with approximately $43 billion to pay down debt on its balance sheet. The company will also cut its dividend back to roughly half of what it currently is. However, the resulting 4% yield still makes AT&T a high-yield investment and an arguably healthier business overall.