When investors think of Pfizer (PFE -0.68%) these days, they tend to think first of Comirnaty, the COVID-19 vaccine that it developed in collaboration with BioNTech (BNTX -0.77%). And since Pfizer estimates that sales of Comirnaty will hit $33.5 billion this year -- around 42% of the company's total revenue -- investors aren't incorrect to focus on that.

However, Pfizer is so much more than just its COVID-19 vaccine. The pharmaceutical giant's recent announcement that the European Union's Committee for Medicinal Products for Human Use recommended that its drug abrocitinib -- trade name Cibinqo -- be approved to treat adult patients with moderate to severe atopic dermatitis or eczema was a reminder of this fact.

Based on Cibinqo's efficacy and the size of the eczema market in Europe, I believe the drug's potential for Pfizer is incremental while the overall potential of the drug could be enough to move the needle. 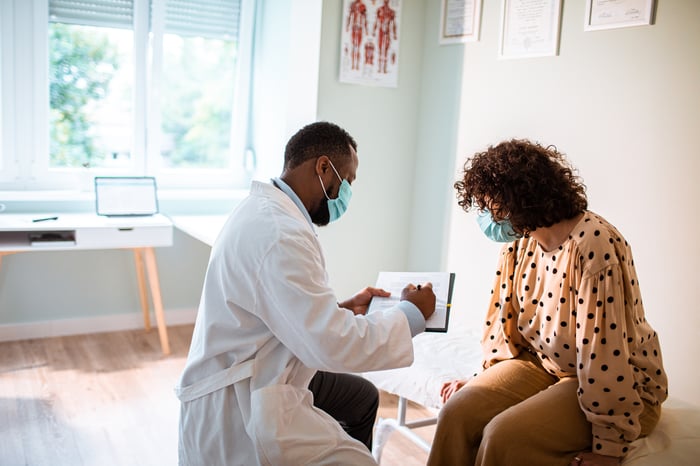 According to the American Academy of Dermatology, atopic dermatitis is the most common form of eczema -- a condition that leads to dry, itchy, and painful skin that can also result in a lack of sleep and interfere with daily life. This is especially true for patients with moderate to severe cases of the disease.

While first-line treatments like topical corticosteroids are usually sufficient for patients with mild cases, the European Medicines Agency notes that patients with more severe forms of eczema require other therapies to achieve relief from their symptoms. This is where Cibinqo could fit into the picture.

Pfizer will release full data from its phase 3 study of Cibinqo at a later date. But it did report in August that the clinical results for eczema patients receiving Cibinqo were statistically superior to those achieved by Dupixent, the leading drug in the indication, which was developed by Regeneron (REGN -0.29%) and Sanofi (SNY -0.35%).

A greater proportion of patients taking 200 milligrams of once-daily Cibinqo achieved at least a 90% improvement on the Eczema Area and Severity Index (EASI) than patients receiving 300 milligrams of Dupixent every other week. (The EASI is a tool that healthcare providers use to measure the surface area and severity of eczema outbreaks before and during treatment.) A 90% reduction in a patient's EASI amounts to a huge upgrade in their quality of life.

Cibinqo's superiority over Dupixent is encouraging news for Pfizer, considering that Dupixent generated over $8 billion in sales last year -- most of them as an eczema treatment, and the remainder coming from its asthma and nasal polyps indications.

A boost to non-COVID revenue

While we will have to wait to see the specific clinical trial results to learn just how much more effective Cibinqo is compared to Dupixent, let's consider the financial outlook based on the assumption that Cibinqo is only slightly more effective.

Dupixent has a four-year head start on Cibinqo in the European Union. And there are still some safety concerns regarding Janus kinase (JAK) inhibitors like Cibinqo such as increased risk of cancer and blood clots, so I don't believe it will overtake Dupixent as the leading drug in the eczema market. But it doesn't need to claim the top spot to make a splash for Pfizer.

Assuming that around 10% of that patient pool ultimately goes on treatments other than topical corticosteroids, that's a potential market of nearly 1 million patients. I believe that Cibinqo should be able to attract 6% of that market -- 60,000 patients.

The Institute for Clinical and Economic Review (ICER) estimates that a fair annual price for Cibinqo in the United States would be in the $30,600 to $41,800 range. Since drug prices in the EU are generally 50% to 60% lower than in the U.S., let's be conservative and assume an annual list price of $12,000 for Cibinqo. And factoring in insurance adjustments, let's work from an estimated annual net price of $10,000 per patient.

If Cibinqo is authorized for use in the E.U., that would work out to around $600 million in additional annual revenue for Pfizer. $600 million isn't large by itself considering that Pfizer estimates that it will generate $44.5 billion to $46.5 billion in non-COVID vaccine revenue this year. However, Cibinqo was also recently approved in Japan and the United Kingdom (U.K.) to treat eczema, which should add another $500 million to annual revenue. And if Cibinqo is ultimately given the go-ahead in the U.S. for eczema, there is reason to believe that this could be a blockbuster indication for the drug in the U.S. alone. That's because while the U.S. eczema market with 6.6 million moderate to severe patients is smaller than the E.U. market, drugs are much more expensive in the U.S.

All told, I believe that annual sales for Cibinqo could eclipse $2 billion across the major markets of the U.K., Japan, the E.U., and the U.S. if approved in the latter two markets. This would equate to a 4%-plus boost to Pfizer's non-COVID vaccine revenue, which suggests that Cibinqo's potential to be a blockbuster a couple of times over should be a key part of Pfizer's future growth.

Income investors can also rest assured that Pfizer's 3.6% yield isn't at risk. The company's dividend payout ratio will be around 39% this year. This leaves Pfizer plenty of room to not only maintain its payout but to continue growing it.