Pfizer's Cibinqo snagged an approval in Japan to treat patients with eczema.

Late last month, Pfizer (PFE) announced that its drug, abrocitinib, was approved by Japan's Ministry of Health, Labour and Welfare (MHLW) as a treatment for patients 12 years old and up with moderate to severe atopic dermatitis or eczema.

Japan's regulatory approval of abrocitinib under its trade name of Cibinqo came just weeks after approval by the United Kingdom's Medicines and Healthcare products Regulatory Agency (MHRA) for adults and adolescents with moderate to severe eczema. Let's dig into why the MHLW approved the drug for its eczema indication, as well as its sales potential and what it means for Pfizer. 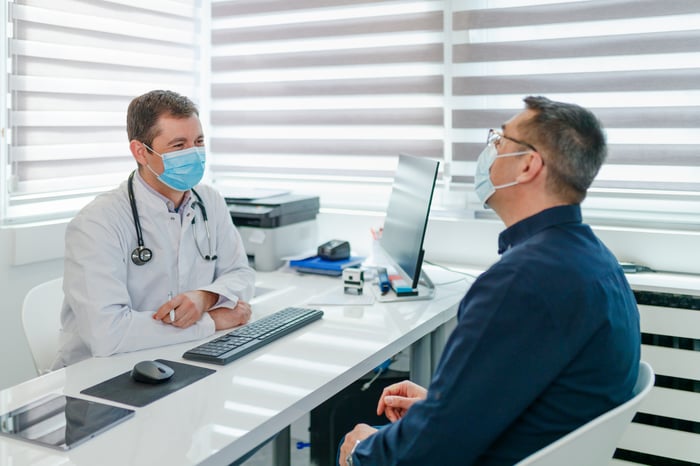 For those who are unfamiliar with eczema, according to the National Eczema Association, it's an inflammatory skin condition characterized by a rash-like appearance and a relentless itch. The persistent itching and discomfort of eczema can also result in difficulty sleeping. This is often a significant detriment to the quality of life of an eczema patient, which is why it is important to treat the condition.

The usual first line of therapy for those with eczema is topical corticosteroids (TCS), which are effective in treating the majority of those with eczema. But for a significant minority of eczema patients who don't experience meaningful benefits from TCS, there is a tremendous unmet medical need. And that's where Pfizer's Cibinqo could make major contributions in treating difficult cases of eczema.

For context, the leading eczema drug is Dupixent, which was co-developed by Regeneron (REGN) and Sanofi (SNY). Dupixent is also approved as an add-on treatment for a type of asthma, and chronic rhinosinusitis with nasal polyps, which is what helped the drug to record over $8 billion in sales last year. And while Pfizer will be releasing the full results of its most recent phase 3 trial for the drug at a later date, Cibinqo was found to be superior to Dupixent in each evaluated efficacy measure. More patients receiving 200 milligrams of Cibinqo once-daily versus 300 mg of Dupixent every other week reported at least a four-point improvement in the severity of the Peak Pruritus Numerical Rating Scale at week 2 of treatment from their pre-treatment baseline.

In layman's terms, the Peak Pruritus Numerical Rating Scale is used by medical providers to measure the itch intensity in patients with moderate to severe eczema. While full data hasn't been released from the trial, Cibinqo demonstrated greater efficacy than Dupixent in reducing itch in eczema patients at week 2 of treatment. This should result in improved quality of life for eczema patients.

There could be solid incremental revenue for Pfizer

With a better understanding of Cibinqo's efficacy in treating eczema, now we can examine the sales potential of this drug for Pfizer. Cibinqo's phase 3 clinical trial that demonstrated improved efficacy over Dupixent is undoubtedly a selling point. However, it will be pivotal to see just how big an efficacy advantage Cibinqo holds over Dupixent as Pfizer shares more data in the coming months.

That's because the U.S. Food and Drug Administration (FDA) issued new warnings for Janus kinase inhibitors such as Cibinqo last month. This could prompt caution from healthcare providers around the world in prescribing Cibinqo in favor of Dupixent if the benefits are perceived to be outweighed by the risks compared to Dupixent. The encouraging news for Cibinqo is that at a glance, the percentage of patients discontinuing Cibinqo was similar to those who discontinued Dupixent due to adverse events.

Approximately 105 million adults are living in Japan and with an estimated eczema prevalence of 6.5% for adults, there are 6.8 million adults with eczema living in the country. Since 23.3% of eczema cases are estimated to be moderate to severe in Japan, there are about 1.6 million adults with moderate to severe eczema in Japan. Of that 1.6 million, roughly 19% won't be able to control their symptoms with TCS alone. So, the realistic market of adult patients in Japan with moderate to severe eczema for Cibinqo is around 300,000. I expect that Cibinqo will seize 10% or 30,000 of those patients, which conservatively accounts for the lingering questions of Cibinqo's efficacy and safety relative to the leader Dupixent.

Since the Institute for Economic and Clinical Review estimates a U.S. annual list price of $30,000 to $40,000 and prescriptions in Japan are an average of 43% cheaper than in the U.S., I will assume a net price of $10,000 annually for Cibinqo. This eczema indication in Japan alone should therefore produce around $300 million in annual revenue for Pfizer. While this is a fraction of a percent against Pfizer's $78 billion to $80 billion in anticipated revenue for this year, it's a nice incremental revenue for the company.

An investment with a dependable high-yield

Although Cibinqo looks like a promising new drug for Pfizer, the company isn't sitting idly by and waiting to find out. While established products such as COVID-19 vaccine Comirnaty and pneumonia vaccine Prevnar-13 generate significant revenue, Pfizer is working to discover, research, and commercialize the next line of breakthrough products.

In fact, Pfizer recently ramped up its research and development expenses from $3.8 billion through the first half of last year to $4.5 billion this year. Though there aren't any guarantees that higher R&D will lead to more drug discoveries and approvals, it's the best shot that a pharma stock has at innovating and staying relevant. That's why Pfizer's 3.7% dividend yield is safe for the foreseeable future and is a top pick within its sector for steady income.