The technology giant's business is firing on all cylinders as it spends to improve its platform and beef up its security solutions division.

Shares of Microsoft (MSFT -0.61%) climbed by 17.6% in October, according to data provided by S&P Global Market Intelligence.

Year to date, the technology giant's shares have risen by 52.3% and are scaling new all-time highs. 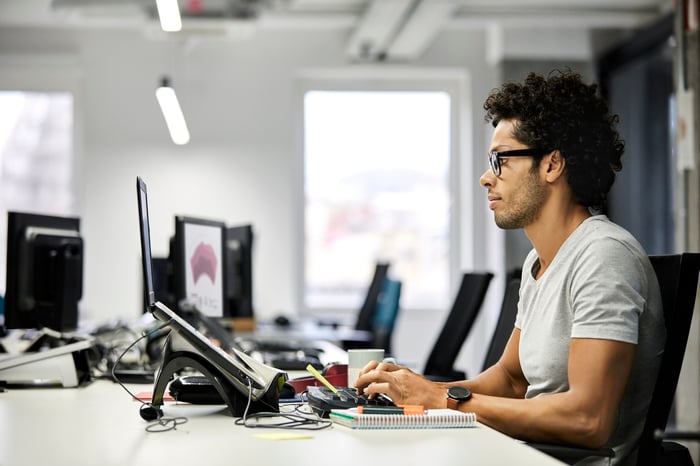 Of note, the company's intelligent cloud division grew faster than the overall business at 31% year over year. Total cloud revenue for the quarter clocked in at $20.7 billion, up from $15.2 billion in fiscal 2021's first quarter. Microsoft's Office 365 Consumer subscriber numbers saw a 19.4% year-over-year increase to 54.1 million, driving revenue for the division up by 10% year over year. Not to be outdone, the company's professional services network, LinkedIn, saw its revenue jump by 42% year over year in tandem with a 19% year-over-year increase in sessions.

CEO Satya Nadella provided a few eye-popping statistics during the company's latest conference call. Eighty-four percent of Fortune 100 companies use GitHub Enterprise, a platform that helps companies to build and maintain their software. Since Microsoft acquired GitHub three years ago, it has doubled its number of developers to 73 million. LinkedIn has nearly 800 million members and its service LinkedIn Learning has over 15,000 enterprise customers that are using it to train and upskill their employees.

The company's suite of services continues to enjoy strong demand, from its Azure cloud computing platform to its videoconferencing tool, Microsoft Teams. The pandemic has resulted in an explosion in demand for personal computers and many more people are going online in unprecedented numbers. Microsoft is well positioned to take advantage of this trend and capture incremental user demand for all its services.

The next five years will see Microsoft invest $20 billion in cybersecurity solutions to better protect customers as its security solutions user base expands by 50% year over year to 650,000. And on the gaming front, the company is slated to release its largest lineup of content and exclusive games during the upcoming holiday season. Its cloud gaming service is now available in 26 countries and is fast gaining momentum as it markets its Game Pass subscription service.

Microsoft is firing on all cylinders as its services are embraced by both individuals and corporations. The future looks bright for the company as it strives to continuously improve its platform while expanding its suite of products and services.

Microsoft Is Making Massive Investments in AI and ChatGPT, and Shares Could Be Really Cheap for Long-Term Buyers
413%