Competition is ramping up, and Elon Musk took to social media last night.

For what seems like the first time in a month, Tesla (TSLA 11.00%) stock is moving down Tuesday morning. Since Oct. 1, the stock has shot up about 54%, but that trend is taking a break today. The stock dropped more than 5% early Tuesday, but as of 10:20 a.m. EDT, Tesla shares recovered some of that and remained down only about 1.2%.

Besides the needed breather for the seemingly unstoppable growth stock, several other factors may have had investors taking profits early today. For one thing, competition -- for both the vehicles and the stock -- is ramping up. Over the weekend, Lucid Group held a rally for the owners taking delivery of its first luxury sedans. And Amazon-backed electric vehicle maker Rivian is getting closer to going public, with The Wall Street Journal reporting it is seeking a valuation above $60 billion in its initial public offering (IPO). 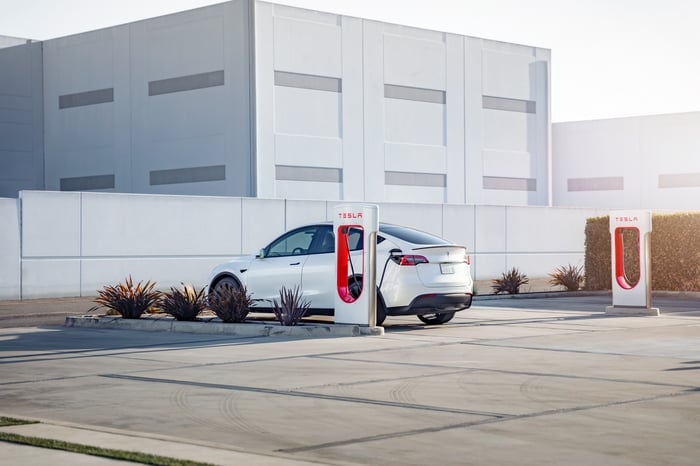 But the bounce back from the initial drop today may be from what investors read into from Elon Musk's comments on Twitter last night.

In response to a comment from a Twitter user, Musk downplayed the previously reported 100,000 vehicle sale to rental car company Hertz. Musk, in fact, said of the deal that "no contract has been signed yet." This was somewhat surprising considering that Hertz is already running television commercials highlighting its Tesla cars.

That might have initially seemed like negative news for Tesla, but Musk went on to say that any sale to rental fleets would be at the same margin as for other consumers. Traditionally, automakers reduce inventories by selling in bulk to fleet managers like rental car companies at discounted prices. But Musk noted that "Tesla has far more demand than production," and wouldn't be offering bulk discounts to the fleet operator.

For Tesla investors, that's better news than a one-time large sale at discounted prices. Perhaps until more volume is in production from competition, Tesla's supply and demand balance remains heavily in its favor. That helps to explain why the stock reversed its initial drop today.