Can it bounce back after a rough year?

Casper Sleep (CSPR) may be delivering a good night's sleep for customers, but for investors, it's mostly been a nightmare.

After pricing its February 2020 IPO at $12 a share, the stock trades for just $4 today. The timing of that IPO might have been doomed, coming shortly before the pandemic struck. But Casper -- which sells through a mix of e-commerce, owned stores, and retail partners -- also missed out on many of the tailwinds that other e-commerce stocks benefited from, including rival Purple Innovation (PRPL -2.75%).

With the economic reopening in the second quarter, Casper appeared to get back on the right foot as sales from continuing operations were up 45% to $151.8 million, and sales in its retail channel jumped 79% as customers came back to stores. While top-line growth was strong, increased costs related to transportation and materials weighed on the bottom line, and gross margin fell from 51.8% to 47.8%. That was a big reason the stock plunged 17% after the report.

The stock has continued to slide since then as the supply chain woes and inflation have only worsened and several C-level executives and dozens of employees were laid off in September. The stock fell again in late October after a filing indicated the company might be experiencing a cash crunch as a lender agreed to waive a requirement for the company to maintain a minimum cash balance of $32 million through the end of the year. Casper lost $42.5 million in free cash flow in the second quarter. Restructuring expenses from layoffs and office lease reductions accounted for $17.6 million in expenses, and the company had just $49.7 million in cash.

While liquidity is a concern, so is the company's ability to turn a profit. 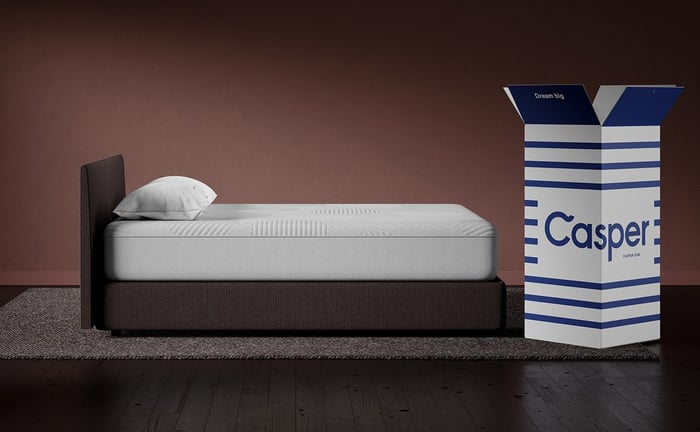 Can Casper get out of the red?

Founded in 2013, Casper has historically been unprofitable, losing money on the basis of generally accepted accounting principles as well as in free cash flow and adjusted earnings before interest, taxes, depreciation, and amortization (EBITDA). But the company is making some progress. In the second quarter, its adjusted EBITDA loss in the second quarter narrowed from $6.7 million to $4.8 million, equal to a margin of 3.2%.

The company said before its IPO that all of its stores are four-wall profitable, meaning that gross profit minus store-based operating expenses is positive. Those stores have also generated more than $1,600 sales per square foot, which is higher than most retailers, showing the company is making good use of its real estate.

Before the pandemic, the company had steadily delivered gross margin improvements but has been disrupted by supply chain issues and other challenges. As of its most recent quarter, overhead expenses, including sales and marketing and general and administrative, made up 58% of revenue, meaning gross margin would have to reach that level at its current size for the company to turn an operating profit. Management says that it earns $3 in revenue for every $1 it spends on marketing, and expects to gain operating leverage on its investments in technology and distribution.

Casper has also been slashing costs, and in September laid off its chief marketing officer, chief technology officer, and chief operating officer and dozens of employees as it pushes toward profitability.

If the company continues to grow, it should reach profitability, but it faces a number of challenges on that path. In addition to macroeconomic factors, the supply chain delays, and labor shortages, competition has also intensified in the industry with other direct-to-consumer brands like Purple and Nectar. Larger companies have also entered the bed-in-a-box business as Walmart launched its own brand, Allswell.

Against that backdrop, it will be difficult for Casper to build a competitive advantage, even if it has the best-known brand in the industry. It doesn't help that mattresses are durable products that last roughly 10 years, meaning companies have to continually attract new customers.

Casper could eventually turn profitable, but with the current headwinds it's facing, investors seem to think it's more likely that it won't. Considering the revolving door in the C-suite and the macroeconomic challenges, it's hard to blame them. We'll learn more when the company reports third-quarter earnings in November.

The Fall and Rise of Casper Sleep Stock
409%