The medical devices company beat analyst expectations in the first quarter of its new fiscal year. Could it be a buy?

The mantra of growth investing is to find and pay a fair price for quality stocks that are in the early stages of growth, with products or services that are gaining acceptance in the market. Operating in the medical devices industry with a market capitalization of $1.1 billion, AngioDynamics (ANGO -0.23%) is established enough that its products are being accepted by medical professionals.

But on the other hand, its $1.1 billion market cap is significantly lower than the industry leader Medtronic, whose market cap is $163 billion.

This raises the following question: Is AngioDynamics a buy for growth investors after a strong start to its new fiscal year? Let's take a look at its operating results, balance sheet, and valuation to answer this question. 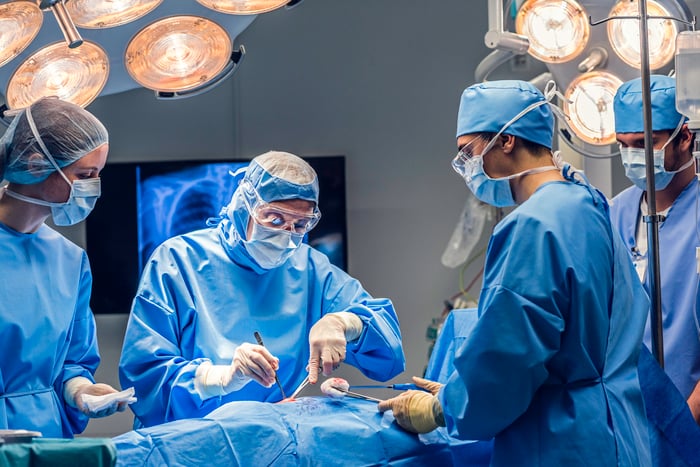 A positive trajectory amid COVID-19

Despite facing the surging delta variant, which CEO Jim Clemmer pointed out on the Q1 2022 earnings call, AngioDynamics wasted no time getting off to a solid start in FY22.

The company reported $77 million in revenue for the quarter ending Aug. 31, representing a 9.6% year-over-year growth rate. This works out to an 8% revenue beat compared to the analyst consensus of $71.3 million for the quarter.

How did AngioDynamics manage such impressive results in the midst of delta variant headwinds?

Well, the company's top-line growth was driven by growth in its med-tech business, which consists of Auryon, NanoKnife, and the company's thrombus management platform. Auryon is a treatment for peripheral artery disease, that unlike many other treatments, doesn't involve the use of heat to remove plaque from a blood vessel. NanoKnife is a less invasive treatment option for patients with advanced and inoperable cancers who aren't candidates for conventional treatments. And the thrombus management platform helps treat patients who have blood clots that form and remain in their vessels.

AngioDynamics' med-tech business was able to grow its revenue 68% year over year to $17.6 million in the first quarter. This offset the impact of the delta variant in its medical device business, which led to a 0.6% year-over-year decline in that segment's revenue to $59.4 million. It's important to note that the slight decline in AngioDynamics' medical device business revenue did include a one-time $5.2 million order from the U.K.'s National Health Service. If that is factored out, medical device revenue would have grown 9% year over year.

AngioDynamics' non-GAAP loss per share of $0.02 beat the analyst consensus by $0.03, resulting from COVID-19 costs incurred in the year-ago period not recurring this year. This led to a 120-basis point increase in gross margin to 52.1% in the first quarter of this year.

The incredible revenue growth observed in AngioDynamics' med-tech business is precisely why the company is focused on transforming itself into a high-growth med-tech business in the years ahead. Given that the global med-tech industry is expected to grow 5.4% annually from $452.6 billion this year to $588.1 billion by 2026, AngioDynamics has plenty of growth potential.

As AngioDynamics works to bring a number of products to market in the years ahead, it will need the capital to fund its growth plans.

Fortunately, it had $35.5 million in cash on its balance sheet at the end of the first quarter. Compared to the $25 million in total outstanding debt during that time, it has a $10.5 million net cash balance at its disposal.

This should provide a nice portion of what is needed to launch the new and improved products necessary to broaden its market.

As society better learns how to deal with COVID-19 and elective procedures return to normal, AngioDynamics' medical device segment will deliver more consistent growth. Coupled with the increasing weight of its faster-growing med-tech segment, this should help to at least keep its top line growth in the high-single-digits to low-double-digits annually for the foreseeable future.

Since it's not consistently generating profits because it's a growth company, I believe the best way to value AngioDynamics is by examining its price-to-sales compared to its top line growth potential.

Trading at just 3.5 times this year's sales forecast of $310 million to $315 million, AngioDynamics is a stock with decent growth prospects at a reasonable valuation considering its high-single-digit sales growth potential.

Is This Under-the-Radar Growth Stock a Buy?

Here's Why This Hidden Growth Stock Is a Buy

Should You Buy This Under-the-Radar Growth Stock?
410%