Supply chain problems and how companies are managing them have captured the attention of a lot of investors this earnings season, but shoe companies Skechers (NYSE:SKX) and Crocs (NASDAQ:CROX) appear to have performed well in spite of these troubles. In fact, both companies reported record sales in the third quarter of 2021.

Here's why strained supply chains aren't holding these growth stories back this year, and why these two stocks are a buy in the shoe industry. 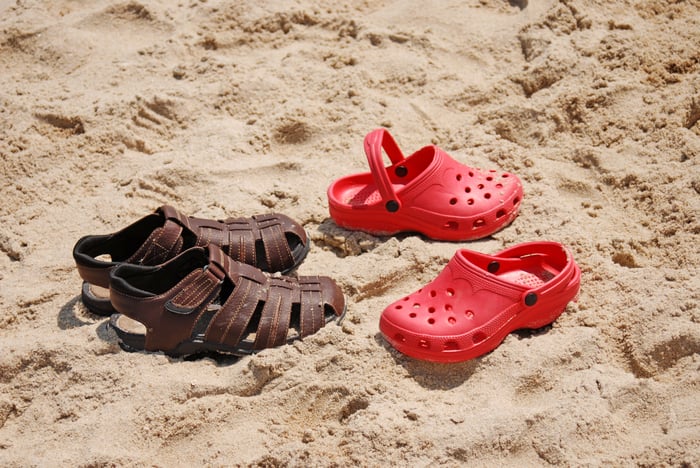 1. Skechers: U.S. sneakers at a value are still hot overseas

Skechers' revenue grew 19% year over year and 15% compared to 2019, hitting $1.55 billion in the third quarter. The new summer sales record came in spite of a temporary shutdown in the company's factories in Vietnam and slow port delivery in some geographies like Europe and the U.S. A rebound from depressed domestic sales led the charge, but Skechers remains a hot brand internationally. Revenue outside of the U.S. was up 18%, with India and China, in particular, expanding 68% and 10%, respectively, compared to 2020.

Shoes are manufactured mostly in emerging markets, so Skechers' large presence in these countries (roughly 60% of revenue is international), where its footwear is made, no doubt helped ease some of the supply problems it experienced. Its direct-to-consumer segment, including its online store, also increased 44%. Shipping directly to end customers via its own distribution centers (rather than shipping first to retailers and other distributors and then to consumers) also no doubt helped ease some of the burden on the world's stressed shipping and freight system.

In fact, Skechers' direct-to-consumer business has better profit margins than its traditional business, which helped lift gross profit margin on products sold and operating profit margin to 49.6% and 9.4%, respectively (compared to 48.1% and 7.1% in the third quarter of 2020). As a result, earnings per share had a 61% rebound over the prior-year quarter and were back to nearly even with where they were in 2019 before the pandemic.

Management is forecasting at least a 14% increase in sales for the fourth quarter, and is seeing early signs of improvement in supply chains and port delivery in some markets like Europe. At just 18 times trailing-12-month earnings, this longtime international growth story still looks like a value.

2. Crocs: The company hits another one out of the park

While Skechers briefly hit the skids in the early days of the pandemic, Crocs had an entirely different fate. The maker of foam clogs enjoyed a surge in demand last year as comfortable and practical kicks won out with consumers. That trend is continuing this year. In the third quarter, Crocs reported a 73% year-over-year increase in sales, and it doubled sales compared with the third quarter of 2019 to $626 million.

Like Skechers, Crocs also reported a temporary shutdown of its factories in Vietnam. But management said it was able to shift manufacturing elsewhere and use air freight to circumvent backups in other types of shipping. In spite of these issues, gross and operating margins came in at a lucrative 64% and 32%, respectively -- some of the best in the shoe industry, no doubt helped by the simplicity and low production cost of the company's footwear.

This torrid pace of growth isn't likely to last forever, but Crocs' management said during its recent investor presentation that it hopes to double annual sales to $5 billion (compared to what it expects to haul in this year) by 2026. An early outlook for 2022 shows that the company is on track to hit its goal, with Crocs saying it sees at least 20% sales growth next year compared to 2021 -- while generating adjusted operating profit in the high-20% range or more when excluding air freight expense.

As of this writing, Crocs' stock trades for just under 15 times trailing-12-month earnings. That suggests some investors still doubt that this growing brand is the real deal.

Admittedly, Crocs has been a cyclical company in times past. Sales went through a multi-year slump from 2014 to 2018. But since then, this love-it-or-hate-it shoe brand has been off to the races. If it can execute its growth strategy and double in size over the next five years, Crocs -- like Skechers -- could be a steal of a deal right now for long-term investors.